Just started BJJ and you’re already wondering when you’re the first stripe is coming? Take it easy there, this is a marathon and a long one at that. There is no point in focusing on stripes and belts, but until you are a blue belt, this will be hard to process. That is understandable as the human urge not to be a beginner at anything is particularly strong when you are a white belt BJJ practitioner and your belt has no notes on it. Stripes will come, but if you are really interested in what it takes for you to earn them, we offer helpful insight in this article.

Unlike other martial arts, BJJ does not have pre-requirements for every BJJ belt written in a book or curriculum somewhere. There is a broad consensus of what each belt should know, but specifically speaking iT does vary from gym to gym, instructor to instructor. In terms of stripes, people don’t really care unless those are stripes on a black belt. Yet, for a white belt, BJJ stripes are some of the most important things they can get, simply because they are within reach as opposed to a purple, or let alone black belt.

White belts have quite a difficult time compared to other belts simply because they know nothing, or know very little. Brazilian Jiu-Jitsu belts take time, almost always measured in years. However, spending time at colored belt means that you get to play around with the knowledge you have while working on expanding it. As a white belt, you do not have any knowledge, and you have to spend what is arguably the longest time you’ll spend at any belt precisely there. 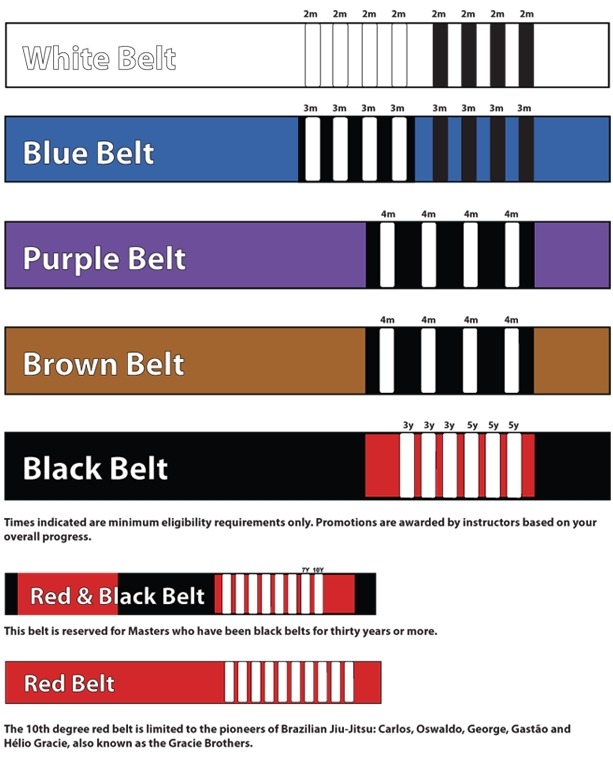 The average time for a white belt to reach the next level, i.e. the blue belt is around two years. While the official time often quoted is around a year and a half, it usually does take more than that. IN fact, I do think it should, and I do think people need to spend most of their time at white and blue belts, figuring out the fundamentals of Jiu-Jitsu. That said, it is a long time to wait for anything, let alone the very first belt in martial art. In other arts, you’d probably have three or four belts already.

Then again, Brazilian Jiu-Jitsu is not like other martial arts. That is very hard for beginners to process though, and they need immediate gratification in order to enforce their sense of accomplishment. So, the stripes enter the frame. Throughout the two years as a white belt, people are genuinely and inexplicably happy every time there receive a stripe on their belt. All those stripes still need to have a technical meaning as well, in addition to making white belt BJJ practitioners happy.

The white belt BJJ stripes work in the same manner as stripes on any belt – you can have a maximum of four. Instructors can always give away anywhere from one to four stripes, but at this level, you usually get your stripes one by one. The thing is, a lot more goes into getting a BJJ stripe, especially as you go towards blue belt than you might think.

The first stripe on your white belt, the first mark that you are no longer a beginner has little to do with your understanding of Jiu-Jitsu or your technical BJJ knowledge. It is something you will get in a few months, and it is there to reward you for coming to class regularly and give you the drive to keep going. This is not to say that you haven’t picked things up in those months, it is just impossible to learn anything meaningful about BJJ in just a few months.

This is where your effort will truly be appreciated. If you were in an introductory group without rolling, until your first stripe, you’re no probably getting a taste of the tas well. At this point, you should have a basic understanding of at least what submissions are, what is top and bottom, and at least an idea about using escapes. With two white belt BJJ stripes, you can freely sign up for a competition as well.

With the third stripe, there’s a certain amount of knowledge that you should demonstrate. It starts with knowing the names of things, not everything, but the main stuff for sure. By now, you probably have around a year or more of experience. IF you were training regularly,y you should be able to figure things out against peers and those with less experience during rolling. In other words, you’re getting the first taste of what BJ Jrealyl is like, and you can see there is a meaning, however vague, to it all. 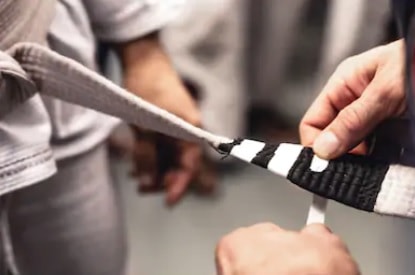 In my gym, if I give a white belt their fourth stripe, they’re probably at blue belt level already. This happens when I can see them thinking during rolling and applying tactics. Paired with dedicated technical practice and not slacking during drills, that is blue belt material right there. However, it is always as good to mature to the next level already having a grasp of things, so the blue belt will have to wait a while longer yet. There’s no doubt about what is next, though.

The first thing to know about a BJJ stripe promotion is that you won’t get whipped with belts. That is an outdated tradition anyway, but lots of schools still enjoy doing it. IN fact, in most academies, stripes do not merit special promotion ceremonies of their own. People just get them based on merit, which is the most important thing you need to realize as a white belt BJJ practitioner. Everything you get in the sport will be merit-based.

Speaking of merits, stripe promotions take into account individual accomplishments above all. that means that if you came in with a friend, he or she might get more or fewer stripes than you for training the exact same amount of time. This s not a big deal, and you should look at what you have accomplished instead of fussing about what others have gained or lost.

During promotions, people at all belts might get anywhere from 1 to four stripes. At a white belt, it is rare for someone to get four stripes in one go, but not unheard of. Usually, at this level, after the first one, you will probably get two, or three in one go at some point if you train regularly. OR, you might just end up getting a blue belt without completing the set of four. Everything is possible in Jiu-Jitsu, so just keep training and try not to give stripes too much attention. 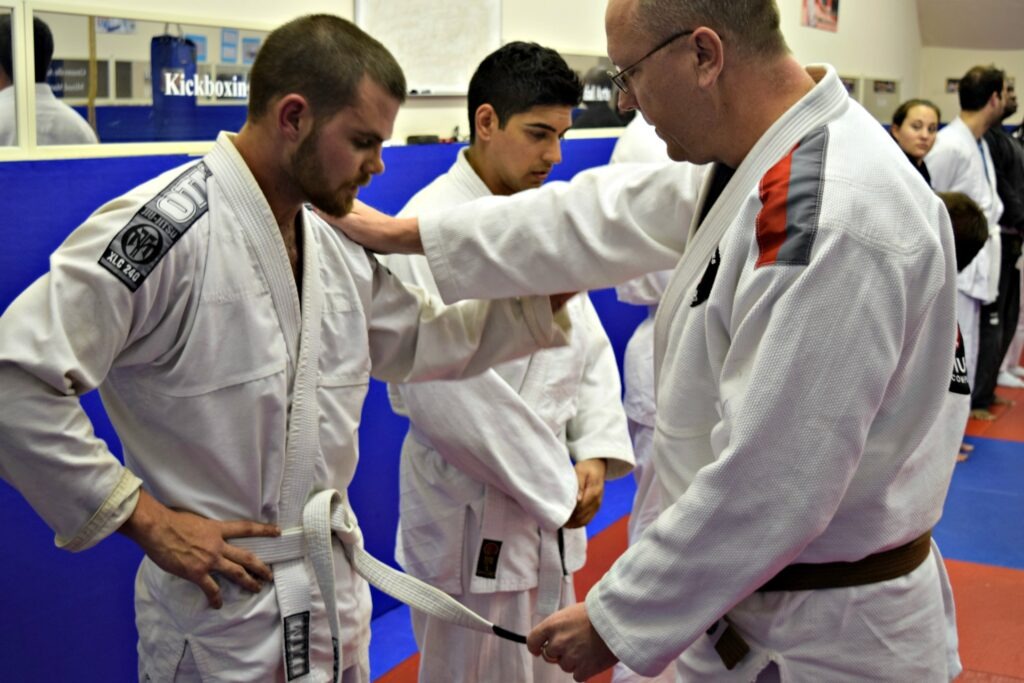 White belt BJJ stripes are very important in our sport. This is not just something for students to remember, but also coaches. There is a huge meaning behind every one of those for the student, even if they don’t fully understand why they got them, especially at first. For all, you white belts out there enjoy the journey because you’ll never be a BJJ white belt again!