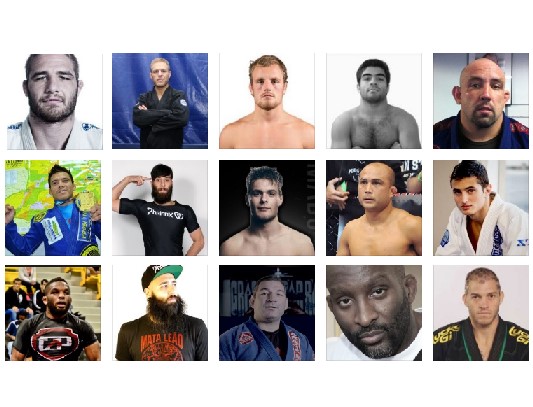 The road to earning a Jiu Jitsu black belt is anything but an easy one. There’s a reason why BJJ schools are called academies, and instructors have the title of Professors. It takes the same time to earn a Jiu Jitsu black belt as it takes to get a college degree. However, just like in college, there are those exceptions that defy the rules.

Sometimes, people are just out of this world when it comes to certain qualities. In Brazilian Jiu Jitsu, there are not many examples of true grappling savants, but those that have done it, deserve all the recognition they can get. Some people just seem to fly through the BJJ belt system and earn their Jiu Jitsu black belt in no time. Actually, there are some examples that have earned Jiu-Jitsu Black belt faster than most people get from white to blue belt.

Most of the people on this list are household names in the world of Jiu Jitsu. They’re famous competitors, teachers, and role models for everyone involved in the sport. Should the aim of every grappler be to achieve their Jiu Jitsu black belt as fast, or faster than them? Absolutely. But be prepared to fail, not in achieving your Jiu Jitsu black belt, but doing it in such a fast time. Because, the people on this list gave everything they had, and more to become the savants of our generation.

Without much further ado, let’s jump straight in the who is who of Brazilian Jiu Jitsu. Here is the list of the fastest Brazilian Jiu-Jitsu Black belts in the history of the port. You can also check the list of BJJ RED BELTS and BJJ CORAL BELTS

Stevens is a Jiu Jitsu Black Belt under John Danaher. Travis Stevens was U.S.A Judo Olympian and that’s the main reason he got his belts so fast. He was white for few weeks, then blue for one month and purple for a few months.

Make sure you check out Travis Stevens BJJ Instructionals as there are a lot of out there. Takedowns, chokes, wristlocks… Travis did the best to combine Judo and BJJ and he did it very successfully.

As far as legendary black belts go, Caio Terra is surely on top of everyone’s list. He is a Black Belt by Reyson Gracie and Paulo Strauch. Caio dominated everyone in the local Brazilian scene and soon became one of the best fighters ever in his weight category. Today, he is arguably the best rooster weight the world has ever seen. He is also the face of small people’s success in the absolute division. The original giant-slayer that got his Jiu Jitsu Black Belt in less than the time most people earn four stripes on their white belt.

The legendary MMA fighter and UFC champion is a Black Belt under Andre Pederneiras of Nova Uniao! He first started training at Ralph Gracie’s academy where he stayed until purple belt. After that, he decided he wants to train in Brazil and Ralph was against that decision. BJ Penn, however, decided to move anyway. In 16 more months, he earned his Jiu Jitsu Black Belt under the one and only Andre Pederneiras.

Burnell is a BJJ Black Belt under Chris Haueter. Hauter is a legend of the sport and a part of the original dirty dozen. For those uninitiated, those are the first 12 noon-Brazilian black belts in the world. Danish MMA talent Mads Burnell got his belt from Chris Hauter after 3 years of very intense training. Furthermore, he was only 21 at the time.

Another one of the three-year mark black belts. Geo is a BJJ Black Belt under the famous Eddie Bravo of 10th Planet Jiu Jitsu. Interestingly, Geo is a very talented former breakdancer who turned his attention and skills towards grappling. Breakdancing obviously helps, but becoming a Black belt in only 3 years is still quite the feat. He placed 4th at the ADCC and won a couple of EBI tournaments.

What’s very interesting about Moraes is that he bypassed a purple and brown belts. He got his black belt in 2004 and went off to win the worlds the same year. The previous year, he also won the worlds, but as a blue belt. Admittedly an astonishing, yet somewhat controversial achievement.

Fowler is a BJJ Black Belt from Lloyd Irvin. He is a very successful competitor who followed Irvin’s “Grappling Blue Print” program. To say that the blueprint works would be an understatement. However, Fowler’s success isn’t just due to Irvin’s guide. His talent and hard work are second to none and he is a legit jiu-jitsu black belt from the day he was promoted!

Irvin himself is one of the fastest black belts in the history of the sport as well. A BJJ Black Belt under Leo Dalla, he was a very fast learner. Actually, he only needed 1 month to get his blue belt. After his coach, Leo Dalla left for Brazil, Lloyd was left to learn on his own. He opened his academy and now he’s teaching all over the USA and in Brazil. He eventually got his Black from Leo Dalla after a total of 3.5 years of training.

Fabiano is a UFC veteran who currently runs a Gracie Barra academy in Oregon. He is one of the fastest black belts and one of the top coaches of today as well. He is by far the most superior coach for masters division competitors.  Fabiano Scherner is also the  author of one of the best BJJ Instructionals for older practitioners: Mastering Brazilian Jiu Jitsu After 40

Another of Eddie Bravo’s black belts, Richie is the brother of Geo Martinez. Today a 10th Planet Jiu Jitsu coach himself,  Boogeyman, as his brother, is a former breakdancer. Breakdancing seems to be the common denominator of lighting fast BJJ success.  Moreover, just like his Brother Geo, Boogeyman got his Black Belt very fast. He’s also was a successful MMA fighter fighting under the TITAN FC banner. lately, the Boogieman is very active in the No-Gi competition scene, especially sub-only events like EBI.

DJ Jackson won world championships in all belt levels. Jackson is an IBJJF No-Gi world champion in blue, purple, brown, and black belt. Furthermore, he is also a  Gi world champion in purple and brown. No wonder he got his black belt in the time most people barely have their blue. Training multiple times a day and competing everywhere and anywhere might have had something to do with that.

Sanchez, AKA the Cuban Tree Stump is a Jiu Jitsu Black Belt under Ze Radiola. He is a famous Gracie Barra competitor, now working under Ze Radiola’s new banner ZR Team. Sanchez won everything in his path as a brown belt, earning his black in 2012.

One more BJJ Black Belt under the legendary Andre Pederneiras. He was a very talented grappler, even as a kid. Shaolin started training at only 14 years of age and won everything in the lower belt divisions. He was promoted to black when he was 18. Although four years might not seem like much, in BJJ terms it is nothing short of miraculous.

BJJ Black Belt under none other than Renzo Gracie. Gunnar is a professional Jiu Jitsu and MMA fighter originally from Iceland. He was promoted to black belt by Renzo Gracie and is the youngest European ever to be promoted in black. At the time of his promotion, he was only 21 years of age. Although his BJJ prowess for MMA never lived up to expectations, His Jiu Jitsu game is still an awe-inspiring one.

Gregoriades is a Roger Gracie Jiu Jitsu black belt. Actually, he is the first-ever black belt given by Roger. Gregoriades is a highly technical black belt that’s known for his love of concepts. His conceptual approach to the game is only rivaled by our next, and last ultra-fast BJJ black belt.

Black Belt Under Yuri Simoes. Kit Dale likes to say that he’s the fastest Black Belt without any grappling experience before BJJ. He is also a wizard in regard to the conceptual approach to gentle Art. Moreover, he is the author of many high-level BJJ Instructionals. If you haven’t checked them out so far, you definitely should as they are pure gold.

Check the list of BJJ Red Belts as there are many more of them than you think.