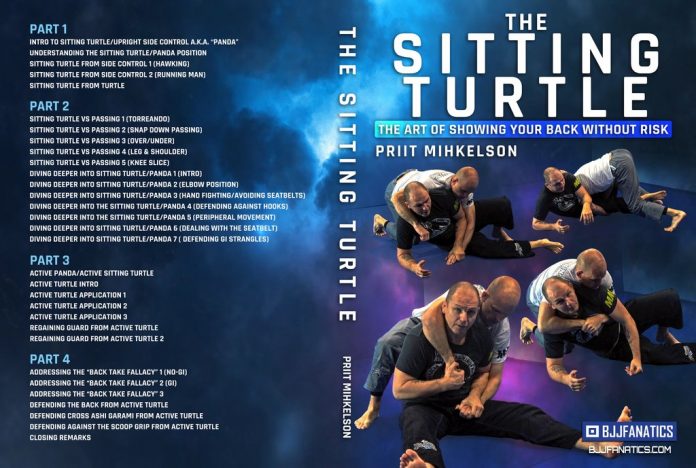 I have to admit, I’m really excited every time I see a new Priit Mihkelson DVD emerge. Until a few months ago, I truly had no idea who the guy was. After his first BJJ instructional though, I doubt there’s anyone that doesn’t recognize him. His second was also pure gold and left us all wanting for more. Luckily we did not have to wait long. The latest Mihkelson DVD, and third in total is now out. Once again, it focuses on the defensive side of things, in a very unique and entertaining manner. This time though, it is “The Sitting Turtle” that Priit explains, a concept not many grapplers use on a regular basis.

Attacking in Jiu-Jitsu, or any martial art for that matter is always fun. Whenever we’re engaged in something productive, and not having to care about losing, we’re enjoying ourselves. However, Brazilian Jiu-Jitsu does not allow for two people t attack at the same time. At least not efficiently. What you get as a result is the need to know what to do when, inevitably, the tide of a match turns against you. So far, we’ve been looking at the basic concept of getting out of bad spots as soon as possible, and maybe getting a counter along the way. However, Priit Mihkelson has a different take on things – he thrives actually attacking from some of the worst positions in BJJ. One such example is “The Sitting Turtle” DVD.

An Unusual Approach To Defense In BJJ

What is so unusual about “The Sitting Guard” DVD? Well, the first thing that really comes to mind is Priit Mihkelson. Yeah, he is an unusual guy, to say the least. That doesn’t make him anything less than an admirable grappler, though. In fact, Priit is one of the most underestimated BJJ black belts worldwide. He was born in Estonia and is a black belt under Matt Thornton. His SBG association alone is more than proof enough of his great BJJ pedigree. However, that’s far from the end of it. Mihkelson is also one of the main coaches in the BJJ Globetrotters community, constantly holding seminars across the world. 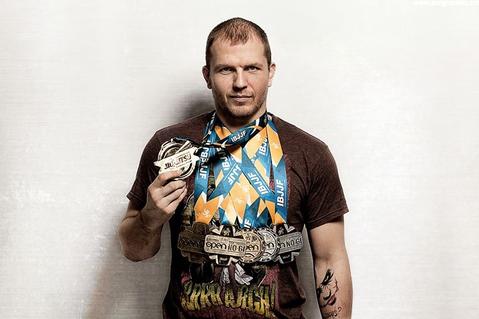 Style-wise, Priit is definitely an unorthodox guy. So far, both his previous DVDs were unusual in both naming and technical lessons. His first one was the “Grilled Chicken Guard Renetetion System” which is just as wacky as the name suggests. In terms of efficiency, though, you won’t find a better No-Gi guard retention system

the “classic” turtle position we all know. The idea behind all of Priit’s instructionals is to bring the spotlight back to the importance of defense. Nowadays we see instructional upon instructional on different types of guards or crazy new submission holds. Priit likes to work the basics.

This is the main concept behind Priit’s game – safety. He does not like to defend himself from bad spots, he likes to be safe in them. As unusual as that sounds, it is perfectly possible and even highly effective. When you find yourself safe in a position like the Sitting Turtle, you can actually think about counter-attacking rather than having to get out of it and reset. This will make your game infinitely more effective and spare you the trouble of having to rely on strength and cardio.

While Priit might not be the first man to look at the turtle position from an offensive aspect, he certainly doe sit in a unique fashion. What you’ll learn in “The Sitting Turtle” DVD is like Eduardo Telles’ octopus guard on steroids. Moreover, it is a highly detailed system that is far from simple. In fact, despite the DVD is perfect for practitioners of all ranks, it contains some highly advanced concepts and ideas. Moreover, there’s more than enough content to really cover everything in detail, given that here are four-hour-long volumes in this instructional.

Priit is a methodical coach even though he seems to be completely crazy. The explanation behind the Sitting Turtle system is “the art of showing your back without risk”. This is exactly what Priit has managed to deliver. The first volume covers the intro and main sitting turtle concepts. Part two is all about using the sitting turtle in real-life scenarios, like guard pass prevention. Volume three takes care of the Active turtle concept, with some really nutty but amazing stuff inside. Wrapping it up is a portion of back take defense and how you can approach it in a whole different manner. A typical Priit MIhkelson instructional translates to a completely atypical BJJ DVD. Ooh and there’s another thing. Priit demonstrates both Gi and No-Gi variations ins this one, making it a complete instructional!

Part One: What Is The Sitting Turtle

This is where we get to meet the sitting turtle, AKA the panda position. All you chubbier guys out there are certainly going to look the part whenever you’re practicing Priit’s stuff. Don’t’ worry about it, though, as you can be as deadly from there as from the mount or back. The idea si that you use the situation of a seated back take to develop and work from a safe position. Yes, it sounds unlikely but for some crazy reason, it works like a charm!

Sections in this part include crucial info on understanding the position. Only after covering the mechanics, concepts and basic idea behind the system does Priit Mihkelson goe into more technical instructions. The final few chapters of this portion address using the Sitting Turtle System when getting out of side control. AS you can expect, innovative ways like hawking and running make up for the largest portion of techniques here.

Part two doesn’t waste time skipping over to different aspects of the system. On the contrary, it picks up right where the first volume ended. However, instead of side control sitting turtle, now you get to

learn how to use t against guard passes the first half of volume tow is actaullѕ all about it, covering everything the Torreando Pass, Knee slice pass and everything in between.

The second portion of part two looks deeper into the Panda system. The idea is now that you have the essentials of the system as well as a certain practical application example you can truly understand what you’re trying to accomplish. Priit is definitely an awesome coach for coming up with the perfect progression for his instructional. Her, he goes step by step detecting everything, from elbow position to peripheral movement and defending common attacks like strangles from the seatbelt and back hooks. 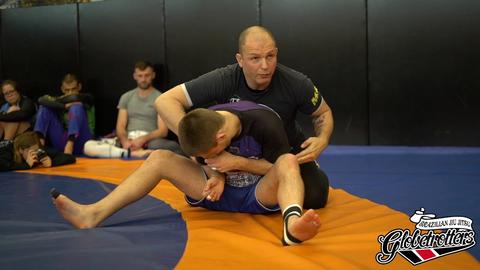 This is the volume where Priit MIhkelson actually turns his offense on. After knowing the inner working os of the Sitting Turtle system, practical application, and deep understanding of the mechanical aspect, you have guaranteed safety. That means that you can focus on attacking since there are no more threats coming your way.

This part of the instructional focuses on the active Panda system, once against rating with an overview. Right after, Priit explains several ways in which you can apply the active panda position to turn the tables. Remember, you’re never truly in a bad spot as long as you understand the panda position in the first place. Activating it enables you to do more offensive things, like get to guard with ease and set up attacks right away.

The cherry on the op comes in volume four of this Priit Mihkelson DVD. This is also the most advanced portion of the DVD as well as the most important one. There are some groundbreaking principles in there, as Mihkelson addresses the back taka fallacy. He completely demystifies the back take, removing all of it’s perceived dominance. Moreover, he offers explanations and instructions for both Gi and No-Gi Jiu-Jitsu.

Befoe wrapping everything in a neat little bow. Priit shares a few more pointers on defending the back. Even more importantly, he shares how his active turtle system works to defend cross Ashi Garami as well. Going even further he addresses the dreaded scoop grip too before ending with a conclusion.

All in all, Priit Mihkelson is exactly the type of coach that can take you a whole level higher in a very short period of time. His instructionals are definitely unusual, but they do work in both competition and training. With an upcoming BJJ globetrotters camp In my vicinity, I’m looking forward to training with Priit very soon! Until then, I’ll keep on practicing the Sitting Turtle System so that I know exactly what to ask him!