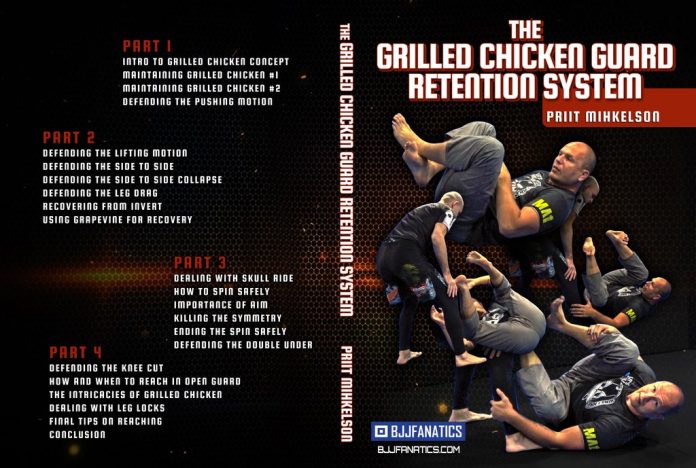 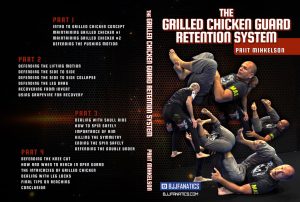 Priit Mihkelson is one of the most entertaining and knowledgeable people in BJJ! He is a part of the BJJ Globetrotters community, which is how I got to know him. He is also one of the best coaches in the world without a doubt! The reason you might not have heard of him is that he lives and works in Europe, as he is originally from Estonia. Priit is now into his forties and is notorious for his efficiency in grappling. Rolling with him is a real ego check, as you’ll be able to do nothing to a man that’s apparently just sitting/lying there relaxed. Oh, and when he decides to do something, you’ll be powerless to escape him, Now, the unique “Grilled Chicken Guard Retention System Priit Mihkelson DVD allows us a glimpse into his diverse and crazy effective grappling system!

Priit Mihkelson is an Estonian Brazilian Jiu-Jitsu black belt under the legendary Matt Thronton from SBG. The last 18 years of Priit’s life have been all about martial arts. During the last decade, his main focus is Jiu-Jitsu, grappling, and MMA in particular. Currently, Priit is the head coach at 3D Training, the biggest Estonian martial arts school.

At 41, Priit uses all of his vast experience in martial arts, particularly grappling, to make sure he is just as effective as the young guns. He likes to describe his grappling style as “functionalistic minimalism” which is a great way of explaining it. Priit’s grappling style is very unique and can be described as the most offensive defense-based grappling style in existence. With Priit it is all about bare-bones fundamentals like posture and movement and a whole host of crazy names to go with his concepts. This makes it as easy for him to teach as it is to dismantle world-class black belts with ease.

A huge platform that allows Mihkelson to share his unique system is the BJJ Globetrotters community, which organizes huge training camps across the globe. Now, however, the Grilled Chicken Guard Retention System is actually a Priit Mihkelson DVD means that we have unrestricted access to Priit’s systems, at least in terms of the bottom game. Just a few days ago, Priit got a second stripe on his black belt by none other than Chris Haueter, one of the BJJ Dirty Dozen.

This DVD is good for everyone, literally. But it is particularly good for people that are in the Masters’ categories, especially those over 40. That said this is not just another “over 40” DVD. It is an instructional offering a solution for one area of Jiu-jitsu which gets progressively more difficult with age. That is guard retention. When you do not have athleticism, flexibility, explosiveness, and strength to lean back on, you’re not left with much. If you’re aiming to be effective from your guard you can’t let people pass it. And if you lack any of the above qualities, this Priit Mihkelson DVD is your one best hope.

If you want to be smart about grappling, you’ll pick this the Grilled Chicken Guard Retention System DVD set even as a young and “all-powerful” grappler. In fact, it is much better if you learn all about Priit’s way of doing guard early, so that you’re ready when things start to give way. Priit is one of the most difficult guys to hold down and/or submit. He has such good defensive positioning and so many different slick escapes that he seems to just slide out of things.

The Grilled Chicken Guard Retention System is based on this type of strategy. Surprisingly enough, the main goal is not to retain guard. The main goal is to actually position safely so that you do not need to even worry about guard passing attempts. And, when you throw in an attack or two in the system you get one of the best guard systems in existence!

DVD 1 is where you get to learn what the Grilled Chicken Guard is. Priit explains the system, the idea behind it, and the “specific” name. You’ll also understand why Priit likes to name his moves the way that he does.

Much of the first volume is dedicated to maintaining the position. make a note that guard maintenance and guard recovery are not the same things. Priit explains how the grilled Chicken guard works, and how to stay there for extended periods of time. It is a complete philosophy that incorporates a few easy-to-understand concepts. Actually, much of the first volume of the Priit Mihkelson DVD, after the introduction, is all about staying inside the guard.

The final chapter goes over an immensely important concept – how to deal with opponents that are pushing forward.

Part two is where things start to get more dynamic. However, the dynamic in Priit’s system is a change of angle, and perhaps maybe a hip escape motion. Do not expect crazy lapel traps or complex movements. Functionalistic minimalism, remember? The concepts Priit goes over in this volume include lifting the opponent and depending on common directions of attack. The methodology includes what, how, why, and when. Brutally simple.

In terms of the direction of movement, Priit likes to focus on dealing with side-to-side movement, and pressure passing. he also offers the best way of killing the leg drag pass even before it takes place. That one has been a lifesaver for me, literally. If you like to play outside Ashi Garami, this one is going to help you forget all about smash passing.

Wrapping up are some inverted concepts and the grapevine guard recovery principle.

#3. The Concept Of Symmetry

In the third volume of the Grilled Chicken Guard Retention System Priit Mihkelson DVD, you get to learn some advanced tips and tricks. Now that the guard and main avenues of movement are clear, you can focus on some Priit “specials”.

Here’ Priit covers some of the core concepts of his Grilled Chicken Guard – aiming and symmetry. It has to do with spinning as effectively as possible, without having to bear the weight of the opponent. Priit teaches you how to spin, what to aim for and how to kill the symmetry, which is going to take any guard pass offline immediately. The volume ends with an awesome double-under guard pass defense.

Some highly specific stuff here. Priit takes the foot off the brake and goes deep into the guard’s essentials. Make sure you go over the previous three volumes though, as you need the underlying principles before you start using this volume. All the intricacies of the Grilled Chicken Guard Retention System are explained here. From the broad concepts to the finest details.

Examples of concepts covered in the final volume of this Priit Mihkelson DVD are knee cut defenses, leg lock escapes, and the concept of reaching. This last one is one of the main takeaways from the instructional. You’ll learn when it is safe to reach when in open guard and not give away a submission or pass.

This PrPriit Mihkelson DVD is the one guard DVD that the BJJ world has sorely missed. Now that it’s here, I’m not sure if there are enough copies to satisfy the demand that’s certain to follow. Luckily, I knew all about Priit and got mine as soon as it came out. Get the Grilled Chicken Guard Retention System and build an open guard game for decades to come!