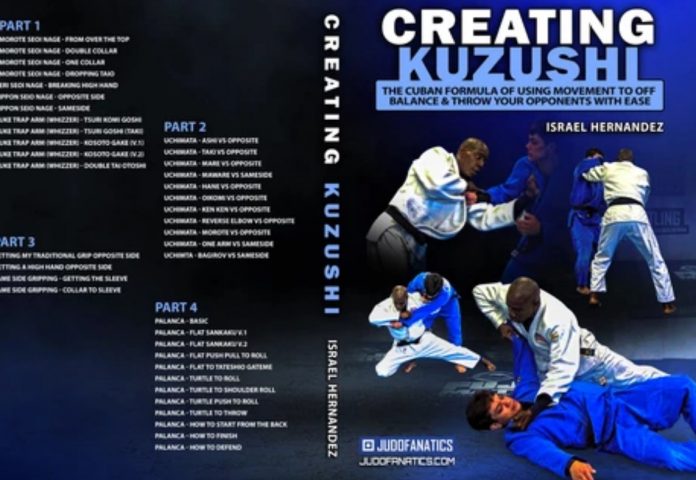 If you area a Judoka, Kuzshi is nothing new to you. However, even f you are a Judo black belt, you’ll benefit from a Kushi specific DVD instructional. The concept is not a difficult one to understand. However, when it comes to actually putting it to practice, things can get frustratingly hard. Moreover, as of late the Kuzushi principle has also made a breakthrough in BJJ. Not that it wasn’t there before, it is just hat we had no name for it or awareness of it. SO far, the best instructional on the subject I have found is the Creating Kuzushi DVD, a four-part instructional by Israel Hernandez.

Creating Kuzshi, in simple terms, means creating a misbalance in your opponent. whenever you manage to off-balance someone, you can do pretty much whatever you want. In Judo, where the idea is to throw people around, this is one of the foundational principles. However, in other grappling arts, even though we use it, we do not pay it even close to the attention it deserves. Speaking of attention to Kuzishi, this Israel Hernandez Creating Kuzushi DVD is a Judo instructional first and foremost. However, Any grapplers out there, whether they train BJJ, wrestling or Sambo, will benefit from this crucial instructional.

The Ancient Concept Of Kuzushi

The reason why Judokas tend to focus on Kuzushi so much is easy – it makes throws easier. When you off balance an opponent, there’s nothing they can do until such a time as they regain their balance. Although this might seem like an extremely short period of time, in Judo it is more than enough. While an opponent is off-balance, you can swoop in to set up any throw during the time they’re looking to regain balance. During such a time, they can’t defend, or even less, counter your attacks. Moreover, Judo uses the regaining of balance to an advantage, turning inertia into a powerful ally for throwing someone to the ground.

In Brazilian Jiu-Jitsu, particularly when it comes to the bottom game, Kuzushi might even be of even more importance than Judo. Here, it is not only about sweeping an opponent, but submitting them if possible. The only trouble is that it may prove to be hard if your back is pressed to the floor. You see, when it comes to Creating Kuzushi from the guard, you really need to know what you’re doing. When you manage to do it, though, you get a double treat – you both break your opponents base and posture with just one attack. The best part about it is that Kuzushi is mostly a part of the invisible Jiu-JItsu. It s all about positioning grip fighting and weight shifting rather than obvious overly emphasized broad movements. All of this is covered int eh Crating Kuzushi DVD in great detail.

Hernandez is a Cuban Judoka that has several high profile titles to his name. AS we all know, Cubans are notorious for their grappling, particularly when it comes to Judo. Israel Hernandez is the perfect representation of the power of Cuban Judo. He is a two-time Olympic bronze medalist, 5 times continental champion and has two silver and four bronze medals in the world championship. This is without mentioning his numerous titles and medals in international competition.

In addition to being an Olympic level Judo practitioner, Hernandez is also an exquisite coach. As a Judo instructor, he is one of the most sought after Judo coaches in the world today. Now 49 years old, Israel is one of Cuba’s best Judoaks of all times, and the number one at 65 kg.  For a small grappler, he is also very famous for battling and beating people well above his age. |He is also a published author and the man behind several high-end Judo instructionals. However, his Creating Kuzushi DVD is an instructional that raises the bar extremely high, even by Israel Hernandez’s standards.

This incredible Judo DVD comes as a four-part instructional that doesn’t leave any rock unturned. Given that the subject si creating Kuzushi, this is the only way to ensure it is a successful DVD. There’s no way to cut corners or slack when it comes to getting your opponents off balance. This DVD is all about the finer aspects of grappling. Actually it is about the finest subtle details that make or break any grappling move. 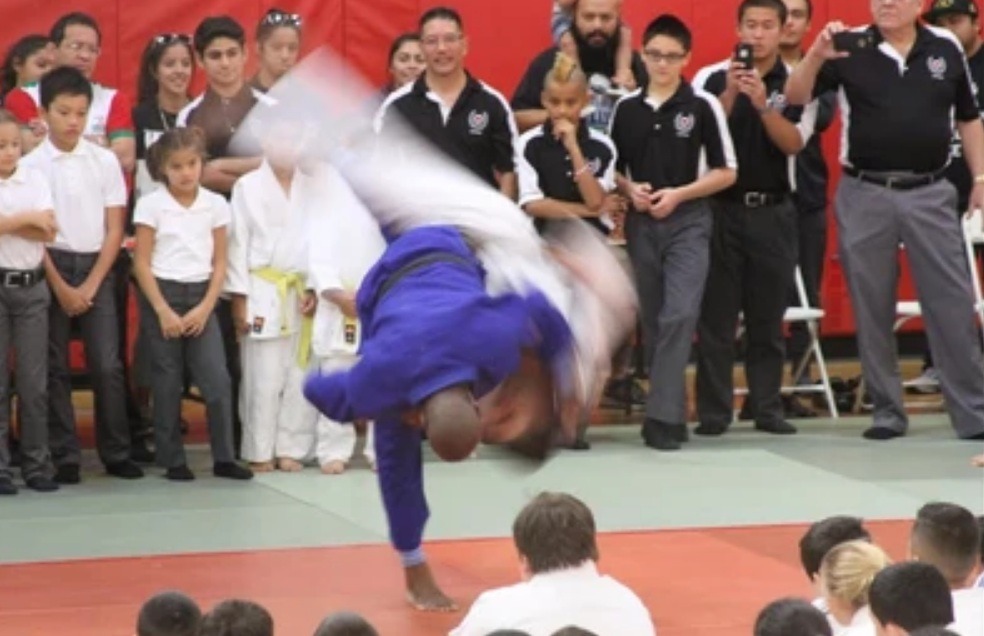 The Creating Kuzushi DVD instructional by Israel Hernandez begins by exploring a key Judo throw – the Morote Seoi Nage. Israel uses it to paint the Kuzushi principle in detail. Moreover, the first disc also covers the Uke Trap Arm, otherwise known as the Whizzer in wrestling. Disc two goes into the Uchi Mata, Hernandez’s favorite move. OF course, this time the focus is on creating Kuzushi rather than only dissecting the Uchi Mata. Part 3 covers grip fighting on both sides before the final one goes into the Palanca concept that makes everyone feel powerless.

In the opening sequence of the Creating Kuzushi DVD Israel Hernandez uses the Morote Seio Nage to explain the Kuzushi concept. As a matter of fact, he uses different collar grip combinations to explain just ho KLuzishi works in order to enable you to execute a throw. In our case, that throw is the Morote Seio Nage. At least in the first portion of volume one of this awesome DVD.

The second portion of volume one moves on to use a more “conventional” technique – the Uke Arm Trap or Whizzer. You are free to forget all that you think you know about the Whizzer so far. What Israel teaches in this portion is not only the Whizzer, but how it can crate Kuzushi. After you achieve it, you are at liberty to throw people any way you want. Hernandez’s picks are the Tsuri Komi Gosh, KOsoto Gake and my personal favorite, the double Tai Otoshi.

If there’s one move that Israel Hernandez is world-famous for in Judo circles, it has to be the Uchi Mata. As a lightweight grappler, he has arguably the best technique when it comes to this real Judo classic. All of volume two covers the Uchi Mata. It begins with Аshi and Тaki мовемент on the opposite side, before exploring the same side Мaware. From there, it is more opposite side movement, which is all about finding the Kuzushi. In fact, al lof the techniques demonstrated here are really good drills you can easily to in class.

Some interesting details born of Israel’s massive experience conclude this portion of the instructional. Those include a reverse elbow grip and the Bagirov Uchimatata versus the same side which is really cool!

As far as BJJ people go, this is probably the most important part of the Crating Kuzushi DVD. This is where Israel Hernandez uncovers the secrets of grip fighting. To be honest, there’s no grappling martial art better at grip fighting in the Gi than Judo. Part three of the instructional does not contain as many chapters as previous or subsequent volumes. Things her area organize neatly in only three chapters. However, each of them lasts a considerable amount of time, as there’s a lot of details that Henandez covers. 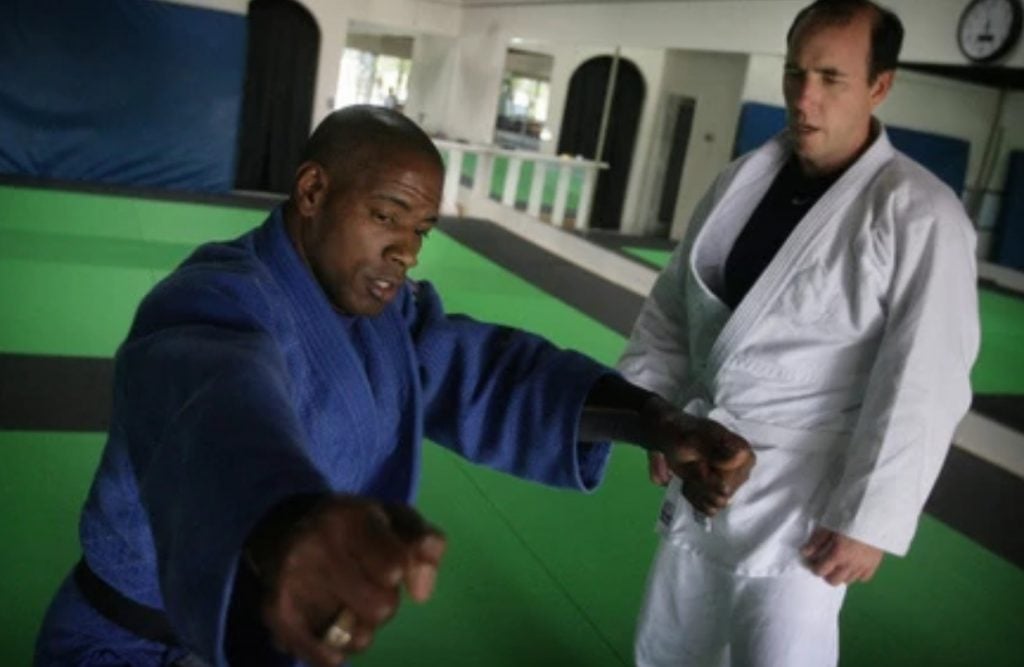 The first chapter is all about traditional grips but on the opposite side. Israel doesn’t just offer grip dynamics, but also entries and ways to establish the dominant ones. The second portion goes into the same side gripping, with the focus on sleeve grips above anything else. The final chapter also addresses the same side gripping, but this time, it is botх the collar and sleeve. Moreover, you get to learn how to transfer grips between the two without ever losing the option of creating Kuzushi.

Finally a bit of Judo training the likes of which you might not be used to. This is where Israel goes deep into the Judo world, uncovering the secrets of leverage, or Palanca, as the Cubans call it. However, this is not leverage in a sense of the throwing portion of Judo. Here, the focus is on escaping by using levers to create Kuzushi, and subsequently, space for counter-attacks. In fact, it is the turtle position that gets all the attention here. However, instead of just bailing out, you get to learn how to turn the turtle into a position of attack. The Palanca series reveals ways in which you can transition into throws and shoulder rolls, and even back mount finishes of the highest quality!

All in all, you can’t really go wrong with this DVD. While it is going to benefit Judokas extremely, there’s no telling what it can do to your BJJ game. In all probability, the Creating Kuzushi DVD is exactly what you need to rally become a next level grappler. After all, all the concepts are highly transferrable to both the bottom and top positions. Plus, Israel Hernandez is as good a coach as they come, not to mention a vastly experienced competitor.