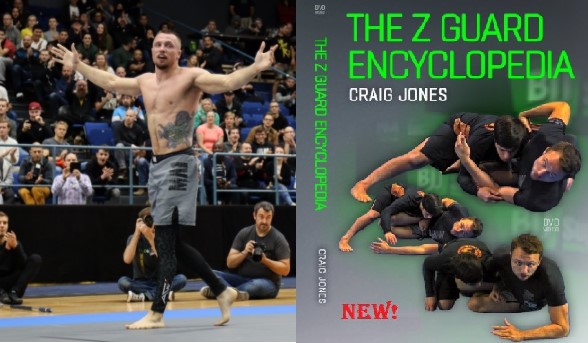 Craig Jones is fast becoming the latest huge star in the world of Grappling. The BJJ black belt emerged from relative obscurity to take the Jiu-Jitsu scene by storm. He trains at Absolute MMA in Melbourne under Lachlan Giles. Following impressive showings at the biggest stages of No-Gi Jiu-Jitsu, EBI and ADCC, the Aussie became a household name in terms of submission effectiveness. He is probably the only one to get near the efficiency of the Danaher Deat Squad leg lock system. As is the case with people who rise to glory via certain moves, he’s got way more tricks in his bag than just hell hooks. In that sense, Jones has just released another DVD instructional. We bring you a new Craig Jones DVD Review: The Z Guard Encyclopedia!

During our DVD Review: Craig Jones The Z Guard Encyclopedia, we just confirmed the fact that Craig is anything but a one-trick pony. While the level of his heel hooking game is beyond any doubt, his game is also a very well-rounded one, befitting of a high-level black belt. As a grappler who seems to favor the bottom position, it is no wonder he set off to demonstrate his knowledge of the Z guard. The best thing about it is that he decided to share his “secrets” with the grappling martial arts world.

The Z guard is an often underrated position in BJJ despite it’s proven effectiveness. Also known as the knee shield, this position offers both a high degree of control and lots of offensive options. In all honesty, the position is a fairly complicated one, requiring a high level of technical understanding of its fundamentals. One of the huge advantages of the Z guard is that it stops the opponent from advancing through a variety of guard passes.

Craig Jones demonstrates his most effective sweeps and sneaky effective attacks from the bottom. He shows how to turn this often defensive position into a true nightmare for your training partners and opponents. The DVD is an exclusive opportunity to also learn some of Craig’s devastating heel hook setups to have your opponents shiver with fear. Make no mistake, this system took a long time to develop. It’s been tested and tried across all kind of competition formats, always coming on top.

In case you need a testament to the effectiveness of Craig’s Z guard system you need to only look as far as the ADCC.  He uses a lot of the techniques he demonstrates to defeat both Leandro Lo and Murilo Santana at the latest edition of the ADCC. So, without further ado, let’s get into the meat and potatoes of our DVD Review: Craig Jones The Z Guard Encyclopedia.

Starting off this series, Craig Jones starts off impressive. First and foremost, he teaches a unique way to enter the Z guard position. Instead of looking to enter Craig forces the opponent right into his Z guard via a very cool bait. He then proceeds to explain all the little tricks that allow you to control the position without much effort. He goes even further by offering a very viable defense against the weave pass, the most utilized pass against the Z guard. It is one of my favorite ways of passing the Z guard, but I’m now reconsidering my approach after witnessing how easy it is to stop it.

In an attacking sense, Craig starts things off with his favorite submission, and it is not the heel hook. Before adopting the dark side of BJJ, Craig was known for his devastating triangle chokes, mostly from the closed guard. His Z guard setup fo the triangle is a true masterpiece, hitting it from a very unexpected angle. Furthermore, he offers a cool armbar as well as a one-arm guillotine that has become a favorite of mine after the very first try! There’s also an Omoplata finish, which is not set up in any revolutionary fashion, but ends in a very unorthodox fashion!

As you progress through the digital content, volume two kicks things off with the basics of the reverse De La Riva guard. Craig offers ways to integrate a very good reverse De La Riva game with the Z guard. After a long while on every aspect of the guard’s basics, Jones offers a couple of great sweeping options against a standing opponent. Both work really well against all levels of training partners, at least for me.

Since I was always a big fan of the Tornado guard, which is as inverted a guard as it gets, the next chapter really hit the spot for me. Craig offers a masterclass on how to invert, how to stay safe and how to attack from the position. All in all a really effective mini-course on one of BJJ’s most impressive and effective guard positions.

A Craig Jones DVD wouldn’t be complete without some heel hook setups and finishes. From the reverse De La Riva, Craig offers a very fast finishing standing heel hook. In an original fashion, he follows up with a scissor heel hook finish and transition to the 50/50 guard.

The final volume of the series is all about the De La Riva Guard. Controlling the guard with an underhook is certainly a novel approach that seems to really work. Craig explains how to utilize the De La Riva underhook to effortlessly sweep your opponent.  He also uses the underhook to gain entry to the Single Leg X guard. This, in turn, is a doorway towards X guard variations, most notably the reverse X. Reverse X guard is a favorite of Craig Jones, with multiple options for heel hooks or sweeps. His use of the Reverse X guard is what got him to the firework final against Gordon Ryan at EBI. To cap things off, he throws a Berimbolo entry into the system, again proving his grappling versatility.

What our DVD Review: Craig Jones’ The Z Guard Encyclopedia demonstrated is that Craig Jones managed to do exactly what – an encyclopedia. It offers options to control, sweep, or move into more elaborate positions to finish quick. Getting this instructional will accomplish two things. It’ll make you very dangerous off your back and it will raise your submission game to new heights. It did it for me and it was totally worth every penny!