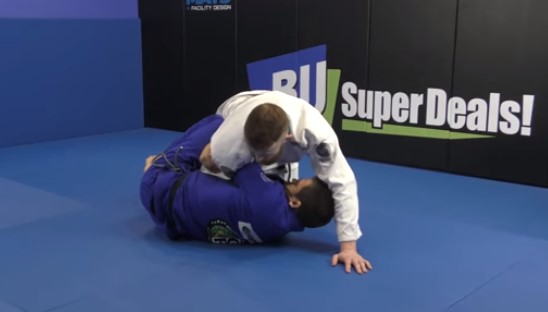 Fighting off the back is Brazilian Jiu-Jitsu’s one characteristic trait that has prolled the art to stardom. Okay, it is not the only one but it is a major aspect of BJJ that amazes people to this day. Understandably, everyone wants to be on top, as it makes the opponent work against gravity as well as yourself. However, when you’re on the bottom, having great attacking options is a must. While the closed guard is the safest position there is, there’s one position that comes to people instinctively, even if they’ve never done grappling martial arts before. It is the half guard position and hardly anybody does it better than Jake Mackenzie. If you want to be as proficient as him in it, picking up a copy of the High Precision Half Guard 2.0 Jake Mackenzie DVD is a no-brainer.

Whenever you’re up against a skilled passer, most open and closed guard variations tend to fail at a certain point. When that happens a new version of a closed guard comes into play, one arguably even more effective than the original. The half guard’s efficiency has been proven over and over again by the top grapplers of all time. However, due to its popularity, the half guard is not one of those mysterious BJJ positions. People have solved the best ways to neutralize the position until they can pass. This means that you’ll need to be really experienced and proficient with it in order to use it to its maximal potential. This, however, requires time. What the High Precision Half Guard 2.0 Jake Mackenzie DVD delivers is a shortcut to learning the best version of the half guard in a sliver of the time it takes to master it.

The Half Guard Position In BJJ

The half guard is by far one of the most versatile positions in Jiu-Jitsu. It is the go-to position for many distinct world champions, the likes of Caio Terra, Craig Jones, Tom DeBlass, Bernardo Faria and of course, Jake Mackenzie.

The versatility of the half guard comes from the many positional variations that are available. The basic half guard is when you have one of your opponent’s legs trapped with both of yours. Basically, the goal is being on your side while having your top leg on the outside of the opponent’s body. From there, the first thing you learn is going for an underhook, which consequently opens up plenty of attacking opportunities.

This half guard classic is known as the underhook half guard. Among other variations of the position, there are the deep half, Z guard, half-butterfly, seated half, lockdown and many more. All of these are very valuable weapons for every grappler. However, understanding of the classic half guard is the foundation for exploring other variations.

As far as half guard basic go there are a few things you need to remember when playing it. First, keep your back off the mat. This means that both your shoulder blades should never touch the mat, no matter which variation you’re playing. Secondly, never (or hardly ever) allow your opponent to control your head. Furthermore, the best way to stay safe in half guard while opening up attacks is framing. Using frames to keep your opponent at bay means you’re not wasting energy while you’re creating much-needed space. Finally, remember that you need to stay active. The half guard is a dynamic position the requires you to constantly be on the move. It is all covered in the High Precision Half Guard 2.0 Jake Mackenzie DVD.

Why Is Jake Mackenzie So Good At The Half Guard?

Jake Mackenzie is considered to be one of the most prominent grappling figures that come out of Canada. He is a Roberto “Cyborg” Abreu black belt, which is a huge accomplishment in itself. He has medaled in all big IBJJF tournaments in Brazil and has an outstanding offensive game from the bottom. For the better part of a decade, he lived in Brazil, perfecting his Jiu-Jitsu right at the source.

Brazil is where Mackenzie discovered the half guard and decide to make it his favorite. Of course, working with Cyborg helped his cause immensely. After all, Cyborg is a half guard magician himself, famous for the creation of the Tornado guard. The Tornado guard is essentially an inverted half guard. No wonder Jake Mackenzie turned out to be even better than his professor at the half guard. All that competing across Brazil also helped.

Nowadays, Mackenzie is a regular teacher at Cyborg’s Florida based gym. He still competes to this day and is relentless at going to the deepest ends of the half guard. As such, his High Precision Half Guard Jake Mackenzie DVD was a real hit. Now, the 2.0 version offers even better insight into this essential BJJ position.

The best thing about this High Precision Half Guard 2.0 Jake Mackenzie DVD is that it is the second edition. This outlines how dedicated Jake is to the position. He could’ve come up with an entirely different subject, given how successful his last DVD was. However, Jake chooses to continue disclosing his amazing half guard tips and has once again excelled at it.

The information presented in this Jake Mackenzie DVD is very similarly structured as in his previous release. Jake primarily deals with all the details of his half guard position before moving on to attacks. Two whole volumes are dedicated to the offensive half guard game. Keep in mind that all his techniques are very appropriately dubbed “advanced half guard” While he takes it to step by step, there is some pretty high-level technique in this release.

The second part of the instructional is all about countering one of the most common passing systems in Brazilian Jiu-Jitsu. During the past 6 or 7 years, the knee cut pass has become the norm, especially against the half guard. Jake shows his take on dealing with it and eventually countering. All in all, you get very specific instructions from a person who simply excels at this versatile BJJ position.

The High Precision Half Guard 2.0 Jake Mackenzie DVD begins like any instructional should – with the very basics. He begins with tips about basic positioning and staying off your back. The underhook battle is the focus here, and with Jake’s tips, you’ll be able to win it 99% of the time. What I think really hits the spot is the grip fighting strategy. This pertains to both sleeve and pants grips that offer unbelievable control love the opponent.

In terms of submissions, I am a guillotine and front headlock guy, so for me, there’s one clear winner in these departments. Jake shows a very cool variation of the guillotine, one that he calls the Pretzeltine. And that name is thoroughly deserved. The Palmieri lock is another move that demonstrates the creativity of Jake Mackenzie. There’s also a very nice Oomoplata finish available. Although the setup is nothing new, there are essential details included.

From a point-based offense, there are two main avenues of attacks. First up are back takes, which hare truly covered in depth. From the very basic underhook entries all the way to butt-drags, Jake opens up clear and decisive paths to the back. Continuing forward, Jake’s other method of attacking are sweeps. When submissions and/or taking the back is not an option, there’\s always the opportunity to sweep. From Lucas Leite’s sweep all the way to some Ryan Hall specials, Jake covers it all.

The second part of the High Precision Half Guard 2.0 Jake Mackenzie DVD is all about dealing with the knee cut pass. As this is the most utilized pass gainst half guards, the need to address it so profoundly is clear. Mackenzie offers an understanding of the pass itself, before moving on to defensive options, to begin with.

Defensively speaking, Mackenzie’s concept is to redirect the pressure of the knee. As simple as it sounds, it is quite complicated and no one can clear it up better than Jake. Again, the focus is on the back takes and sweeps, with the Jedi Mind trick standing out of the bunch. Jake spends a lot of time explaining every concept here, so there are fewer moves per chapter, but they’re longer.

Finally, he ends with a few transitional options when battling the knee cut. Instead of only sweeping Jake offers paths to common attacking open guards like the X guard and the De La Riva. It wouldn’t e complete without a submission though, so there’s another Omoplata setup which completely nullifies the threat of the knee cut pass.