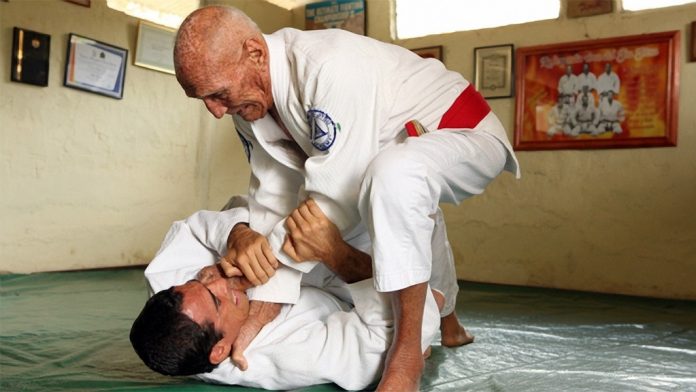 Brazilian Jiu-Jitsu has no age limits. it is meant for people from 4 to 94 years old. or at least that’s the romantic way of thinking about it. A simple look at some of the most prominent coral belts out there is going to show you that years of doing BJJ does not make old age as fun as it seemed to be for Helio and Carlos. Rickson Gracie even got a ban for walking at one point in time. If you think that taking up BJJ at an older age is easier than spending a lifetime in it you’re sorely mistaken. That said there is a way for older grapplers to be safe in training and still be highly effective. The two main factors are understanding when you’re “old for Jiu-jitsu” and developing a correct old man BJJ game.

So, when should you be considered an old man in BJJ? Well, the answer differs from person to person. There’s a host of factors to take into consideration. how long have you been training for? Which serious injuries are you struggling with? How are your body weight, type, and your overall Jiu=Jitsu game? To put into perspective, people that are not professional grapplers should look towards an old man BJJ game after the age of 30-32. After the age of 35, you’re certainly an OG grappler, and not taking care means you won’t be grappling at 40.

Luckily, we can learn from other people’s mistakes and find an old man BJJ approach that fits us. All it takes is some common sense and a modification or two. Those that will have the hardest time with these are people who have an aggressive game. Especially if they’re just getting on the wrong side of 30. While you still might feel like e young gun, you’re not. And training like one is only going to make you older, faster. If you want to grapple till you’re 90 like Helio, then you need to train in a way that’s going to guarantee it. here is the old man BJJ game blueprint that’ll help you achieve it.

As far as old timers go, Kurt Osiander is one that deserves special recognition. The old renegade has seen and done it all in grappling. Now, he has a way of sharing all his fundamental BJJ tips with you. perfect your old man BJJ game with the help of Kurt’s “Fundamentals of A Jiu-Jitsu Renegade” DVD set. It is available now, and you can read an in-depth review of it right HERE!

The start of any old man BJJ game starts with a basic understanding of the human body. As we age, our bodies tend to become more brittle and difficult to repair. Add to that the constant wear and tear of grappling, and you have all the reasons you need to switch things up. The moment you start noticing that you can’t keep up with the pace you used to go at, it’s time for a change.

Playing an old man BJJ game doesn’t mean lying there being defensive as hell and pissing everyone off. That’s the lazy man BJJ game. Instead, it means playing to your strengths, whatever they are. Even more importantly it means removing your weaknesses form the equation so that they can’t be used against you. It means learning to be a predator that hunts from ambushes instead of all-out races. It means finding a rhythm that you can keep using for decades to come, without having to re-assess it again. And, most importantly it means staying healthy for BJJ training and competition until you reach Master’s 5.

In order to cover everything, we’re going to split the old man BJJ game blueprint into three categories. Each category is specific to a certain aspect of Jiu-Jitsu which plays into your overall BJJ game.

Although it is not necessarily a part of the old man BJJ game per say, warming up is essential. There’s no game at all without it, so never ever slack during warm up. In fact, look to add a few things that are specific to your needs as a grappler. Whether it’s due to an injury or simply stiff and tight body parts, make sure you loosen up completely.

Next, when you train the technique of the day, try to avoid unnecessary risks. If the move of the day is berimbolo, either go really slow or try to ask your coach to give you an alternative. While you can’t choose the techniques you can certainly look for a variation. moreover, activate your brain. it’s not just about doing the move of the day. As you’re doing it, think about where it can fit into your game. If the whole move can’t fit, can you use certain parts of it to make your game more efficient? 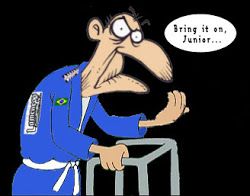 Also, try to keep a steady pace. Even if the technique is an explosive one, there’s no need to get all bent out of shape doing it. Slow is smooth and smooth is fast. Instead of rushing moves, learn to do them so precisely that slow is going to be lightning fast. Also, try and find a training partner that understands this. People that spaz during techniques are ones to avoid in every moment of class.

Certainly being older does not mean you need to skip over rolling. After all, it’s the best part, right? This is where your old man BJJ game really matters. In order to make sure you develop one, start by completely avoiding all the young guns in the academy. That includes all white belts, regardless of size, age or sex.

Next, the most important piece of the puzzle is speed. You need to find your own pace and you need to make sure you keep the roll at that precise pace. Trying to follow someone else’s pace is never a good idea. If they’re younger and/or more experienced than you than it’s’ certainly the wrong strategy. Instead, dictate a tempo that suits you and your style of grappling.

Technique-wise the unwritten rule is keeping things simple. Simple means easy to control and hard to escape. It also means effective, getting a sweep/pass/submission without effort or muscular strength. Instead of playing inverted guard or passing with cartwheels, go for closed guard and leg drags. Also, consider becoming a half guard expert. It is by far the best position for OG grapplers. 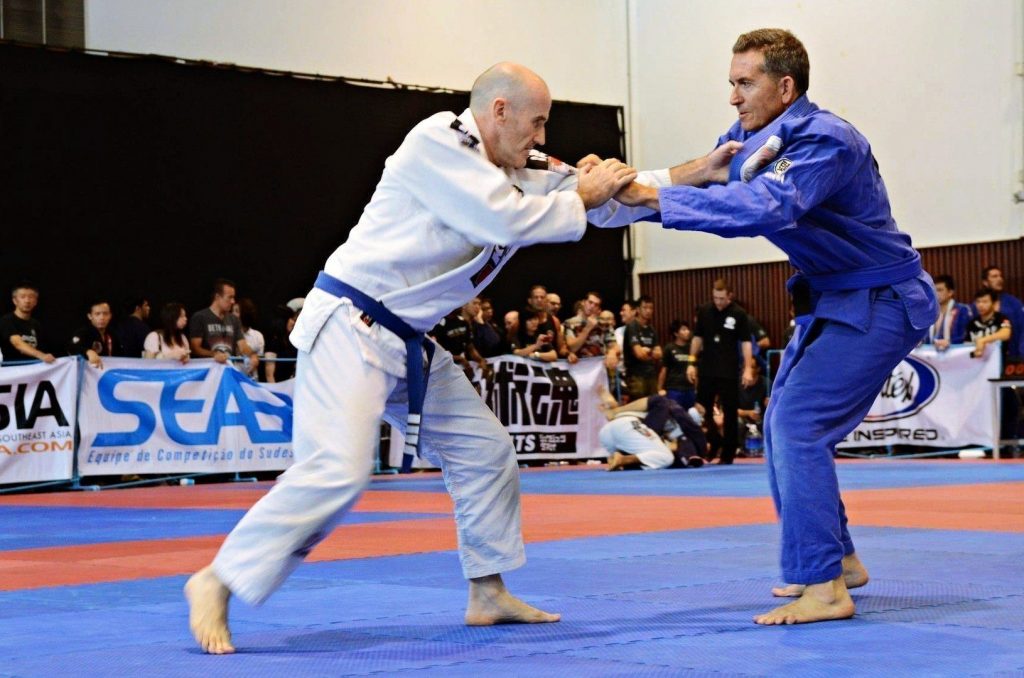 For those OGs that actively compete there’s also the old man BJJ tournament gameplan. Rolling is way easier than competing, meaning you need an even better strategy. First and foremost, you’re going to start your match standing. The rule here is simple – pull guard. It is the safest way to stay safe and get into a superior position. If you really insist, make sure you go for simple stuff like arm drags and or trips instead of full-blown takedown attempts.

Once in your preferred position, make sure you’re safe. If that means wasting a minute or two, then be it. Staying safe means you’ll avoid scrambles and panicked reactions, which are sure to spend a lot of your energy. Instead, stay active but conserve your strength.use smart positioning and dominant positions to obtain as much control as possible.

In terms of an attacking strategy, it is always better to be on the offensive. However, in the spirit of the old man BJJ game, you’re going to do this with a twist instead of being the aggressor, be a counter-attacker. Let your opponent move or bait them into attacking something that’s not really there. Then, use their positioning to capitalize on moves that are there for the taking. Speaking of which, make sure you research sneaky BJ Jsubmissions and attacks. They’re bound to become your best friend for the long run!