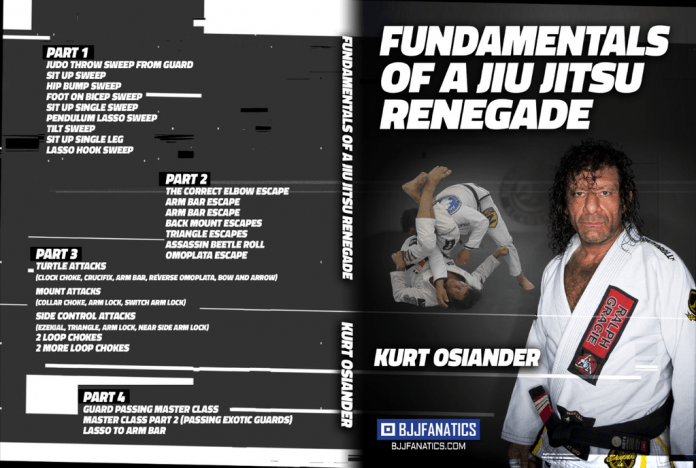 The most entertaining personality in Brazilian Jiu-Jitsu is now on DVD! It is time for the grappling world to rejoice at the latest digital release – A Kurt Osiander DVD! What do you get? Both very high-level technical advice as well as entertainment like no other! Is there anything else you need to convince you to pick up this Kurt Osiander DVD other than the fact it is a Kurt Osiander DVD? If so, read on!

The first time I ever watched Kur Osiander it was in a YouTube video. I howled laughing and didn’t really learn much. This was not because there wasn’t valuable information in the video. It just took me a while to get used to Kurt’s n0-nonsense style of conveying information. He is an entertaining individual, to say the least. So, the moment I saw a Kurt Osiander DVD I went straight to the shopping cart. Seriously, I didn’t even take a look at the subject. Whatever it is, I thought, it must be gold. To be honest, it turned out I wasn’t wrong at all.

The Kurt Osiander DVD instructional in question is on the subject of Jiu-Jitsu Fundamentals. Actually, it is perfectly dubbed “Fundamentals Of A Jiu-Jitsu Renegade”. The perfect title for a Kurt Osiander DVD, don’t you think? In truth, I personally prefer one of two types of BJJ DVDs. One is highly specialized ones, that deal in-depth with very specific subjects. The other is anything that deals with the fundamentals of BJJ. Somehow, Kurt managed to provide a DVD that specializes in fundamentals. it is the best Jiu-Jitsu DVD instructional you can pick up this year, without a doubt!

While you might have many impressions of Kurt, one of him as a “Rhino” doesn’t necessarily come to mind at first. The reason behind the nickname is his relentless pressure game that hardly anyone can deal with. Kurt is a Ralph Gracie BJJ black belt for over 15 years now. At the moment he is 52 years old and still going at it strong.

Kurt started to experiment with grappling back in the 90’s thanks to his friendship with Caesar Gracie. IN typical Kurt Osiander fashion, he asked Caesar to show him a BJJ move. The Gracie family member put Kurt in a rear-naked choke and that was it for him. From that moment on Kurt dedicated himself completely to Jiu-Jitsu. When Ralph Gracie moved to the USA to link up with Caesar, Kurt found his lifetime coach and mentor.

Kurt was well in his 30’s when he started training. He started competing as a white belt and never looked back. training every day soon proved fruitful, as Osiander got his black belt in 2003. Not long after, he got a teaching position at Ralph Gracie’s Academy where he has been ever since.

Osiander is a no-nonsense kind of guy who always speaks his mind. That said, he often likes to use profanities to better express his feelings. this has made him an icon in the world of Brazilian Jiu-Jitsu. His technical knowledge is beyond question and his charismatic character only adds to the attraction.

So, what can you expect from a Kurt Osiander DVD? well, pretty much the same as with his famous “Move Of The Week” youtube series, times a hundred. His style of teaching and interacting has won him thousands of fans throughout the years. So, you get the very best of Kurt Osiander, both technically and verbally. What’s more important is that you’re getting tips on BJJ fundamentals from a legitimate 15 plus year black belt. It can hardly get any better than that, can it?

Kurt’s decades of BJJ experience are now right there for you to learn from. He covers true fundamentals of every aspect of BJJ. All of the techniques he demonstrates are straightforward, technical and with a high degree of success. He covers sweeps, escapes, attacks and guard passes in his four-volume digital release of the year. Expect a very high level of detail along with Kurt’s no BS style of explaining things.

This Kurt Osiander DVD is meant for grapplers of all skill levels. The advanced student is going to find hidden structural and/or tactical points to some of the most common BJJ positions. Novice students are going to learn the very basics right, allowing them to start developing a very high-level game from the get-go. Kurt doesn’t demonstrate nor particularly like fancy moves or complex sequences. He is a rather small grappler who is, after all, in his fifties. This means nothing but efficiency is going to do the trick, and now he shares his tips and tricks with you. Who else to better guide you through the fundamentals than the small guy who has made it in the game for decades?

Technically speaking, the Kurt Osiander DVD is a very well produced digital release. There are great camera angles and the sound is flawless. Moreover, there’s a lot of time for Kurt to talk about every single position. He makes the most of it, as the level of detail he goes into s beyond believable. Get ready to fall in love with the basics again after you get through this Kurt Osiander DVD!

Structurally speaking, each of the four volumes deals with a specific area of the game. There’s a disc for sweeps, escapes, attacks and guard passing, respectively. Each is structured like a system and everything fits together perfectly for a complete game plan. Here’s what you can find in each of the DVDs.

The first disc of the set deals with every effective sweep you can pull off from the bottom. The opening judo sweep from guard is a surprising one to start with, but extremely effective nonetheless. Furthermore, get ready to uncover amazing new data on some of the most common sweeps in the game.

Kurt goes over true basics like the hip bump and sit upsweeps, but offering slightly different ways of performing them both. He also dedicates time to some more complex sweeping techniques, like lasso sweeps. From the lasso position, he offers a few options in the form of a lasso hook and a pendulum sweep. For me, the details on the very simple foot on biceps sweeps very incredibly.

This volume sheds light on sweeps for every type of grappler out there. If you love to go for sweeps than you can use it to really go deep into the world of sweeping. If you prefer a top game, you can choose a sweep to specialize in. The beauty is that with this DVD you get the option to truly understand the sweeps so that you won’t need other instructionals to get the hang of them.

Do you know what Kur is also famous for, despite his crushing pressure game? He is notoriously hard to control, let alone submit. Now you can learn how he manages to escape every submission attempt and position thrown at him.

Kurt kicks things off with the very basics again, starting with the elbow escape. You’re going to learn crucial details on why this move usually doesn’t work. It did wonders for me, to be frank. Going along, there are a couple of really cool armbar escapes that require no crazy athletic abilities. Al lit take is an understanding of angles and Kurt delivers it exceptionally clearly. Omoplata and triangle escape complete the submission escapes.

From a positional standpoint, Kurt offers evasive tactics for getting out of the back mount as well. It is as simple as Kurt is unique, and it works like a charm. Tried, tested and proven!

The third part of this Kurt Osiander DVD is all about going for the kill. Kurt is a recognized hard-ass and he likes to inflict as much pain as possible when grappling. Not injury pain, but the pain from the pressure that builds up towards a submission. This volume has a very clear structure as well and is in turn, divided into 3 different sequences.

First, Kurt focuses his attention on attacking the Turtle. The turtle is a very hard position to attack since it provides the opponent with great defensive opportunities. What Kurt offers is a myriad of attacks that work perfectly against this position. WHat’s more interesting, is that they work together as a chain of attacks too. SO if you desire, you can switch it up between the clock choke, crucifix, reverse Oomoplata and bow and arrow choke.

Next up are mount attacks. Apart from Roger Gracie, Kurt is probably the best collar choke guy out there. Once again he goes deep into the move, explaining every nuance that makes this technique a formidable one. There are also two great, mutually interchanging, armlock options. The switch armlock is something everyone should have in their arsenal.

Finally, it’s loop choking time from side control. Not only loop chokes, but there are triangle choke, Ezekiel, and armlocks as well. However, the main focus is on the loop choke. Not only one though, but four of them, organized perfectly into a system of side control attacks that’s going to catch everyone by surprise.

For the ultimate chapter in this series, Kurt goes over his bread and butter – putting pressure on your opponents! Even better, he goes into the basics of pressure passing. The way this DVD is organized, though is quite different from the previous three volumes.

The DVD has just three distinct chapters, only one of which is a technique one. The other two are simply masterclasses on how to pressure the hell out of your opponent when passing. Kurt obviously deemed it necessary to do two masterclasses on the subject instead of one. Furthermore, the second one is all about passing more exotic guards with ease, Osiander style!

Rounding everything off is a very simple and innovative way to get an armbar against an opponent playing lasso guard.  It is all fun and submissions with the legendary Kurt Osiander!