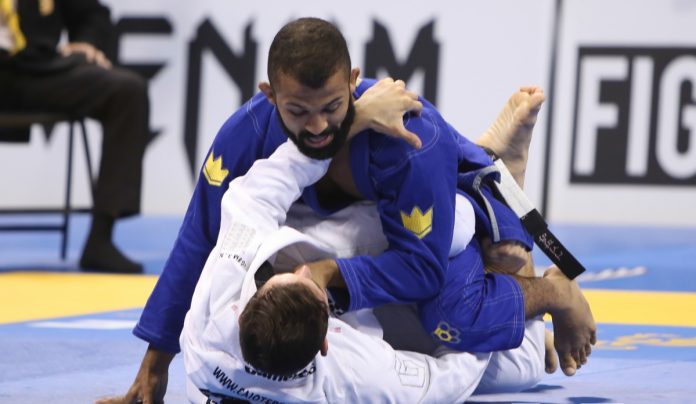 Contents hide
Passing the guard in Jiu-Jitsu is a special thing that not many people truly get to appreciate. The guard game in BJJ is wide and diverse. it is also the first choice form plenty of grapplers involved in the Gentle Art. This is exactly why guard passing is a source of such satisfaction. Getting to completely nullify and then demolish most people’s favorite position is a very rewarding feeling. It takes a special kind of a person to be attracted to guard passing from the get-go. But once you get into that Rodolfo Vieira type of game, there’s no turning back. Smashing guards is going to become the pinnacle of your Jiu-Jitsu game. Just like with guard players, passers have their favorite tools to finish the job. And one of these tools that needs to be in everyone’s toolbox is the leg drag pass.
Directions Of Passing
The Leg Drag Pass
Options Form The Leg Drag

Passing the guard in Jiu-Jitsu is a special thing that not many people truly get to appreciate. The guard game in BJJ is wide and diverse. it is also the first choice form plenty of grapplers involved in the Gentle Art. This is exactly why guard passing is a source of such satisfaction. Getting to completely nullify and then demolish most people’s favorite position is a very rewarding feeling. It takes a special kind of a person to be attracted to guard passing from the get-go. But once you get into that Rodolfo Vieira type of game, there’s no turning back. Smashing guards is going to become the pinnacle of your Jiu-Jitsu game. Just like with guard players, passers have their favorite tools to finish the job. And one of these tools that needs to be in everyone’s toolbox is the leg drag pass.

Passing the guard usually has three main directions. The goal of each is to get past the opponent’s legs, so that you can score positional points and set up attacks. Each direction of passing has specific techniques or concepts that work together towards a common goal. One of the most prolific passing positions is the leg drag pass. yes, the leg drag is much more than just a pass. It is a position that you can use to control an opponent and attack with very versatile and numerous attacks.

The leg drag is part of a pressure passing game that is slow and methodical. Unlike some passing sequences, the leg drag pass requires patience and a slightly sadistic string. It is all about making an opponent quit due to both pressure and the feeling of being powerless to stop it. Now, there are some defensive options for them, but they’re all dependant on you making mistakes or not truly understanding the mechanics of the leg drag. Today, we’re going to cover everything in regards to the leg drag pass position. We’ll go over mechanics, uses and the most popular follow-ups from the position. All in all, everything you need to become a real threat to anyone with this BJJ classic.

Leandro Lo is a household name in the world of Brazilian Jiu-Jitsu. He is one of the most decorated grapplers of all times and a truly fearsome guard passer. He shares plenty of his groundbreaking details on passing in his “Guard And Matrix Passing” DVD Instructional. Get it for tips on the leg drag pass and plenty of other concepts.

Passing the guard is generally done in three main directions. On another occasion, I’m going to dedicate a whole series of articles to cover them in depth. For now, we’ll just glance over them in order to gain an understanding of the nature of the leg drag pass.

Since the goal of passing is to nullify the strength and dexterity of the legs and hips, guard passing must move in very specific directions. The first one is the most logical one – going around the legs. This is exactly where the leg drag pass excels. Along with the leg drag, other passes like the Torreando and X-pass also fall into this category.

The second most common direction of guard passing is going through the legs. This means moving in between the opponent’s legs, looking to isolate each one of them. Classic examples for this include the over-under pass and knee slice pass among others.

The final category is one not many people opt to use. it is pretty acrobatic, at least to people that are spectators. it involves going over the legs, which means you need both dexterity and flexibility. The cartwheel pass and some associated jumping passes are the norms here.

In order to be a successful passer, you’ll need to have knowledge of each of these directions. not only that but you’ll need to know exactly when to use a specific move. The leg drag pass is no different is and its a great place to start!

The leg drag pass is quite simple mechanically. It is based on two fundamental BJJ principles of the top game. The first one is hip control via the hip rewind principle. The second is pressure, also based on twisting your opponent up.

First and foremost the leg drag pass is an open guard pass from the feet. You can use it against the closed guard, but you’ll need to stand up and open it first. Let’s start at a position where both your opponent’s feet are on your hips, while you’re up on the feet. From there’ you’ll need to choose a side to go to. Once you do, you need a two-on-one grip in one of their legs. You can either grab the Gi and the heel or go for a heel and ankle grip. The goal is to guide that leg across your opposite side hip.

In order to force the leg across you’ll need to make the knee as immobile as possible. A simple hip pressure forward is going to get you both. Once you feel the opponent pushing back, get your hips back and use the newly created space to guide their leg over. The goal is to place your hip right up on the back of their thigh.

As you get there, you’ll need to drop on your knees in order to make sure there’s no space for them to counter. The knee that’s on the side of the trapped leg needs to fall on or over the thigh of their other leg. This will act both as ap in for that leg, and a platform for the dragged leg. You should aim to keep the opponent’s spine twisted by pinning their free shoulder to the ground with your arms and upper body.

The first thing to remember once you’re in a leg drag position is patience. “Cook” your opponent a little while by keeping them wound up and under pressure. It’ll be much easier to pass then than rush right into a pass. The leg drag requires small movements and keeping constant pressure on the opponent. for that, you need to keep your hips heavy.

Passing the guard is as easy as walking yourself to the side where there are no obstacles. That’s the side of the leg that you have dragged over. IFrom the leg drag position, place your arm behind the opponent’s neck. Keep the elbow of the other arm on top of the trapped leg’s knee, keeping it in place. Then, you can simply move, step by step, to the free side, ending up in side control.

One very usual reaction from your opponent is turning away from you, looking to end up on their knees. This sets them up perfectly for the back. As they turn, simply insert your hook into the space that opens and get a seatbelt grip on. From there on you could go for the back or the Truck.

Alternatively, you can think about getting to the 4/11 position for a heel hook as well. Simply throw your outside leg over the trapped leg to get the triangle and simply sit back. you’ll end up deep into a perfect leg locking spot!