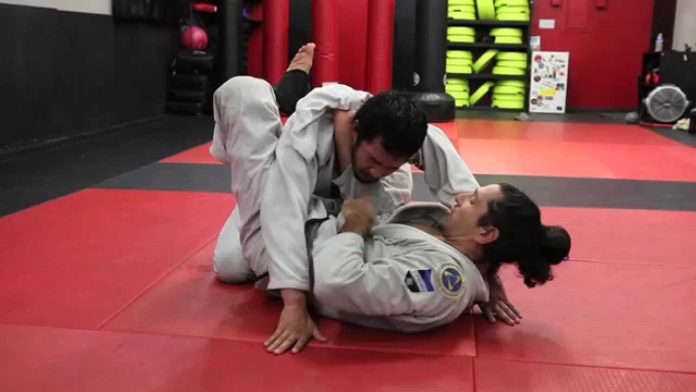 What if I could tell you that you can use the same submission you’re using with the Gi and make it effective in No-Gi? Or that it works in reverse too? Yes, it’s not anything groundbreaking but it is a fact of Brazilian Jiu-Jitsu. If you like to use a Guillotine choke, for example when you’re rolling No-Gi, what do you do with the Gi? Guillotines can be really tough to pull off with all that Gi material in the way. Luckily there’s an option you can switch to directly, without giving up on the submission. For a Guillotine choke, the loop choke is the like-for-like Gi alternative. But there’s something better. If you’re into getting D’arces left and right, consider the Gi Brabo choke. It’s going to drastically change your choking game.

The Brabo choke is a fairly old one, to be honest. It is actually a synonym for the D’arce, albeit a less famous one. Nonetheless, the Brabo is just as effective, especially when you turn to the lapels for help. The Brabo choke takes over from where the D’arce stops working. it is as simple as that. Wrapping someone up in their own Gi and slapping on a Brabo is a real source of pleasure. The plus side? You’re not limited to getting the Gi based Brabo to positions that are usual for the D’arce choke.

You see, whenever you’re in top half guard, or top side control, the D’arce is always a viable finish. Especially when opponents look to establish and underhook thinking it will do them good. In just such situations, when the Gi is in play, you can reach for a lapel and do Brabo instead. What you can also do with the Brabo is get it from the bottom. Yes, the D’arce works from bottom side control in certain instances. But the Gi Brabo works form full guard at a 100 % finishing rate. Sounds too good to be true? Read on!

In order to simplify things let’s put it this way – everything is the same up until the grip. You see, the Brabo choke is still an arm triangle choke in essence. this means that in order to get it, you need one of the opponent’s arms and both of yours. The configuration of the arms is just like wit the D’arce. One arm goes over an opponent’s arm and then under their chin, all the way through to the other side of their neck. Up to this point, everything is the same with both hokes.

Once the arm punches through, though, you need to decide what you’re going to go after. If its a D’arce you’re after you need to establish a gable grip and look to beak posture. The ultimate goal is to get the figure four configuration behind the opponent’s back and finish. For a Brabo though, you need to work on getting some Gi material loose first. We’re going to get into how to do this later on, but for now, just be clear that you need the top side lapel-free.

The way the Brabo choke works is by replacing one of your arms (the second one) with a lapel. namely, you need to have the lapel of an opponent threaded all the way behind their neck. The arm that’s in a D’arce position needs to grip the end of the lapel instead of your other arm. Now you’re in a position of a much better control than any gable grip (or other grips) can offer. To  finish, all you need is to get the trapped arm across your body and squeeze. You can finish with one arm in most occasions. If the need arises, your free arm can also grab the lapel for more pressure.

The Brabo Choke From Hell

The Brabo choke game is a really versatile one, as we already stated. Just to get the mechanics down, we’re going to go over the top half guard Gi Brabo. After that, we’re going to look at how the Brabo offers something very different from the closed guard if you know how and when to get it.

As far as the half guard goes, The Brabo choke from hell only requires you to get the lapel. Since most people go for the underhook anyway, all that you need to do is release the lapel on the same side. Once they have an underhook, you’ll need to be fast or you’ll find yourself fighting off all kinds of sweeps. You could go straight for a Whizzer and get the lapel freeform there. Once you have it, you’ll need to thread it through all the way up and behind their neck. At this point, your other arm will have to secure it until you can thread the underhooked arm in for the choke. Once you have the grip on the lapel you can rest. You have total control and all you need to do is just apply pressure.

For the closed guard version you’ll need a bit more deception. The goal here is to find a way to release the Gi without making your opponent any wiser as to why. In order to achieve this, simply grab, pull and release their Gi on several occasions. Once the Gi is undone you have a clear path to setting up the Brabo. All you need to do is thread it behind their back and around their neck.

What you get form this position is immediate posture control. Even if you decide to chill right there, you’re safe from any kind of pass or counter. Until the opponent breaks that grip they’re going nowhere. And, you’ll find that grip is really difficult to break. The broken posture also allows you to get your arm over theirs and through to re-grip for the Brabo. This is where all hell breaks loose for your opponent.

In order to finish, all you need to do is transfer their trapped arm across your body. In case of any defense attempts, you can use the position to weep to either side and finish the Brabo choke from the top, just like before. Whatever the situation, you have a fool-proof closed guard strategy that works. And, if you’re a D’arce fan, it involves your favorite move as well.

The Paper Cutter BJJ Choke For Gi And No-Gi