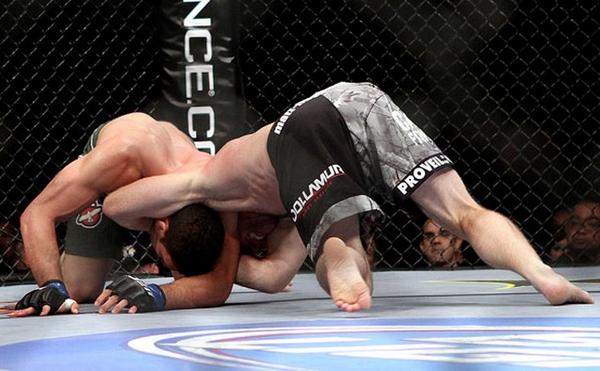 The front headlock is an extremely powerful position that is universally applicable across all grappling martial arts. It is effective when standing, on the ground or during transitions. It can be used as a takedown, position to control, transition or submit an opponent. The origins of this move are rooted somewhere deep in the art of wrestling, However, there is a variation of the standard front headlock that is arguably it’s the most effective version out there. It was popularized by the infamous Schultz brothers and today we’re going to dissect how this choke/headlock works.

Wrestling has a massive contribution to the development of BJJ and submission grappling. So far, takedowns and weight distribution are the two largest parts of wrestling that Jiu-Jitsu players mostly focus on. Since the front headlock as both a takedown and pin, it is one that is frequently sought after in BJJ. In fact, every time an opponent turtles up, the front headlock is an easy way to improve your positioning. In No-Gi matches, people tend to use it as a takedown on its own, or to set up choking attacks. Whatever the approach, the front headlock features heavily in both BJJ matches and during training. However, there’s a version of it that flies somewhat under the radar. it is an aspect of the front headlock that grapplers would be wise to look further into.

The Schultz brothers, Dave and Mark are mainstay names in the world of wrestling. The Schultz Brothers are multiple times world champions as well as Olympic gold medalists in freestyle wrestling. Their contribution to wrestling is immense, even though some of their moves are considered illegal. That doesn’t make them illegal in BJJ though. Actually, teh submission aspect of their front headlock philosophy is what makes it a perfect fit for BJJ.

The Schultz brothers were born in California in the early ’60s. The older of the two was Dave, closely followed by two years younger brother Mark. They took up wrestling at a relatively early age, showing unbelievable talent and work rate from the get-go. Both brothers we relentless in their pursuit of grappling greatness, and managed to achieve it in a most spectacular fashion.

The Shultz brothers are the winners of numerous wrestling accolades. They’re freestyle wrestlers that managed to win anything and everything at every level of wrestling. That includes winning the Olympics as well. What’s unique about them is that the brothers managed to win at the same Olympics, in different weight classes. To this day, they’re the only American brothers to both win Olympic gold medals and World titles in wrestling.

Dave tragically lost his life to murder, at the age of 36, while preparing for another Olympic run. He was murdered by the owner of the Foxcatcher wrestling center, later dubbed as not guilty by reason of insanity. His brother Mark went on to win an MMA match at UFC 9 after retiring from competitive wrestling. He also gave Rickson Gracie a very tough grappling match. Mark is also a BJJ black belt under Pedro Sauer.

So speaking of the front headlock, what makes the Schultz brothers’ variation so different? Well, their front headlock is basically the most brutal way of controlling someone from the position by maximizing your leverage via grip modification and body positioning. Let’s get a bit more detailed.

The front headlock position is when you control an opponent while standing in front of them. If we take the turtle position as an example, the front headlock involves you placing an over/under grip from the front side of your opponent. The regular front headlock usually calls for a gable or S-grip and has the task of pinning an opponent. In wrestling terms, you could also transition or spin to get an opponent falt on the mats. In BJJ terms, submitting with a guillotine choke is usually the next step. There are also multiple transition options available, like getting the back or a leg lock.

What the Schultz brothers did was put a lot of emphasis on grips and body positioning. First, they call for a chin strap, that connects with an s-grip to your other arm. Next, you need to pull the opponent to the front, trapping one of their arms. Interestingly, the Schultz brothers preach staying slightly to the side instead of directly in front of your opponent. The side you go to is the one where you control their arm.

Once you have total control it’s time to take away any space left. For that purpose, you need to maneuver your grips into a Gable grip. At this point, you need to place yourself perpendicular to your opponent and place the back of your head under their armpit. From there the goal is to bring your elbows together and twist.

What happens when you catch someone in a Schultz front headlock is discomfort. Compared to the relative looseness of the traditional front headlock, the Schultz headlock makes opponents feel claustrophobic. Furthermore, it compresses their own shoulder into their neck, allowing you to control or tip them over with ease. No opponent in the world is going to be able to stay in turtle once you get them ina Schultz front headlock.

One useful byproduct of this position is exactly the thing that made it illegal in wrestling. The shift in body position to the side accentuates the strength of the grips to such an extent, you get a choke right then and there. The choke works and can catch even black belts by surprise. If you need a testament of its effectiveness, know that Matt Hughes pulled it off in the UFC against Ricardo Almeida. And Mark learned the move directly from the Schultz brothers. The choke works because of the body positioning, grip configuration, and the squeeze of the elbows.

Next time you attack from a front headlock, go for the Schultz headlock. Even better, go for the Schultz choke, The worst thing that can happen, is that you’ll end up in a perfect position to hunt other chokes. If you need a resource for all available chokes from the position, look no further than Lachlan Giles’ “High Percentage Chokes: No Gi” DVD. He is going to teach you everything you need to know about guillotines, D’arces, neckties and the like. Just like he taught Craig Jones.