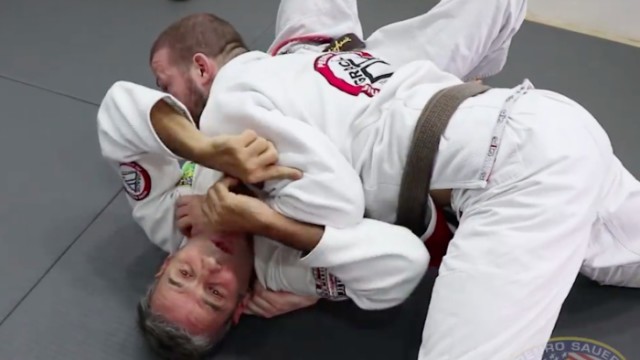 As far as chokeholds in Jiu-Jitsu go, the basic rule is that the sneakier the choke, the better it will work. The element of surprise is a huge factor in the success of BJJ choke. From the back, everyone knows that a Rear Naked Choke or lapel choke is coming. However, from certain positions in Brazilian Jiu=Jitsu, people simply do perceive chokes as threats. These positions are exactly where you want to be good at choking from. One great example is the paper cutter choke, which is what we’re going to discuss today.

When you’re looking for a BJJ choke during rolling, there are a few basic principles you need to apply. For one, you need to be able to get the neck clearly, otherwise, it’ll just be a crank. And people do not really tap to unintentional cranks. Secondly, you need to ahve a strong grip so that there’s no countering. And thirdly, you need to be as sneaky as possible with the setup. This means not allowing your opponents to even realize a BJJ choke is coming. With the paper cutter choke, all of these points are covered.

The paper cutter choke is a really nasty BJJ choke of the sneaky chokes variety. The most common position for getting it is topside control and people very rarely see it coming. Even when they know it is a threat. To that extent, the choke itself is fairly simple, meaning it is appropriate for students of all levels. That said, with a very simple and brutal modification, the paper cutter also works perfectly in No-Gi. All in all, this is one BJJ choke you should have in your toolbox. Even if you keep it in the “just in case” department.

The Essentials OF The Paper Cutter BJJ Choke

The paper cutter choke is a simple side control lapel choke. It involves a very precise shift in body weight in order to finish. For the paper cutter choke, you need to start from a side control position. The most essential step is trapping the opponent’s arm that’s near you and keep it there to the end. Form a basic side control position, trapping this arm involves using your elbow and your hip/thigh area. Once you have it trapped, make sure your arm is under the head of the opponent and reaching all the way on the other side.

Setting up the choke requires you to place a grip on the back of the opponent’s lapel, right down the middle of it. The gripping point is exactly in the middle of their neck. As with every lapel based BJJ choke, the deeper you grip, the better. In order to place this grip, you’ll have to raise your butt slightly off the ground so that you can thread you free arm through. Never let go of the trapped arm while doing this, or you’ll have to reset everything. The path of the arm is under the opponent’s trapped arm armpit and all the way on the back of the lapel. The grip is four fingers in, thumb out. Once you have it, get your butt back into side control.

Finishing the paper cutter choke involves grabbing the collar on the far side shoulder of the opponent. Your first arm (the one under their head) should already be in place. This grip is a thumb in, four fingers on the outside. Once you have it, all you need to do is clear the head, bringing your forearm across their neck.

Now, finishing the paper cutter BJJ requires a bit of finesse. Yes, strong-arming it might get you a choke, but it’s not as cool as getting a tap without any exertion. To that extent how you manipulate your body weight is going to determine how successful you are with the choke.

First and foremost you need to understand that you’re going for an air choke with this one. It involves placing unbearable pressure on the windpipe of the opponent, cutting off the air supply.  Once you have the choke in place, your first finishing point is to place the elbow of the choking arm on the mat. Once you have it, this is where you’ll get most of your taps. However, in order to make it effective, your weight has to be behind the elbow as well. In that sense, you mustn’t allow yourself to slide away from the opponent when doing so.

This is where your second finishing point comes into play. In order to place maximal pressure on the opponent’s throat, you’ll need to project your weight To do this, first you must sprawl. However, do not sprawl backward, as you’ll allow space for your opponent to turn into. Instead, look to push towards them with your feet, while lifting your hips and knees off the mat.

The final finishing point of this BJJ choke is the twist. Once your elbow is on the mat and you have your weight forward, you need to twist your torso so that you’re looking towards the opponent’s legs. This is going to dig your elbow in the mat, providing that throat rushing pressure you’re after. Only at this point, if the choke is lagging, can you think about squeezing.

In terms of hitting the paper cutter in No-Gi, you have two options. One is not that far off from the Gi version, with just the grips being different. The second one though, is my personal favorite, although it is somewhat unlike the basic Gi paper cutter.

For the First variation, everything is the same up to the point of establishing grips. Since there’s no Gi, you’ll be looking to establish a palm to palm grip on the far side of the opponent’s head. Once there, finishing is exactly the same, and even faster due to the tightness of the forearms.

When you’re looking to get even more brutal, there’s a very cool variation I particularly enjoy using. This one is going to take some time to master since you’ll have to find your balance point. Once you get that right, you’ll be unstoppable. With this variation, you use an S-grip to connect your arms behind the opponent’s neck. The best placement is at the same spot as a lapel grip would be with the Gi. The S-grip allows for enough mobility to lift your butt completely in the ear. This, in turn, opens up space to place your near side knee straight on the opponent’ neck. For balance have the top of your head on their sternum.

Become a choking machine with the help of one of today’s most eminent coaches. Lachlan Giles is the man responsible for the beast that is Craig Jones. His specialized DVD set “High Percentage Chokes: No-Gi“ is one you can use at every level and in any given situation. Give it a try and never worry about your opponent escaping a BJJ choke again!

Guillotine Choke – Basics, Secrets, and Variations to Make it Perfect
The Rear Naked Choke From Hell
Unorthodox Gi Chokes From Every BJJ Position
Is The Japanese Necktie The Tightest BJJ Choke Ever?