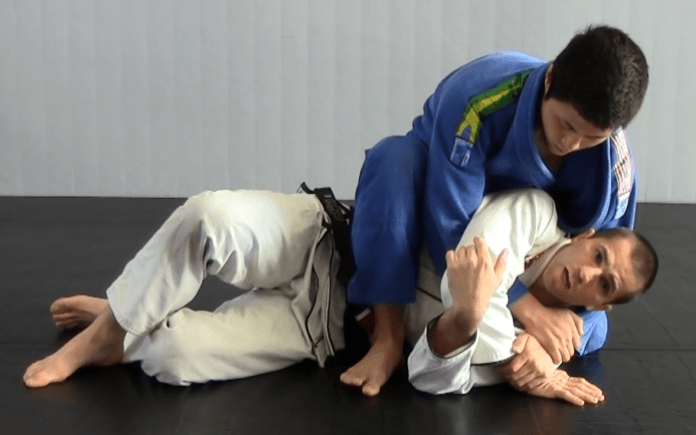 Contents hide
If you look at the most dominant positions available in Brazilian Jiu-Jitsu, two are most likely to catch your eye immediately. The mount and back positions are considered the check-mate positions of grappling. In point baed competition they offer the most points and open up great attacking opportunities. Even better, you’re relatively safe when you’re attacking from them. Even switching between the two is possible and, in fact, used by many. However, there’s also a position right between them, offering many of the benefits of both. It is the perfect amount and back hybrid, also known as the BJJ gift wrap.
The BJJ Gift Wrap Position Clarified
Getting To The Gift Wrap
Gift Wrapped Submissions
Related Articles:

If you look at the most dominant positions available in Brazilian Jiu-Jitsu, two are most likely to catch your eye immediately. The mount and back positions are considered the check-mate positions of grappling. In point baed competition they offer the most points and open up great attacking opportunities. Even better, you’re relatively safe when you’re attacking from them. Even switching between the two is possible and, in fact, used by many. However, there’s also a position right between them, offering many of the benefits of both. It is the perfect amount and back hybrid, also known as the BJJ gift wrap.

So, what exactly is this BJJ gift wrap position? We’ll get into the nitty-gritty of it, but for now, let’s paint a simple picture. You know how a person’s arms wrap when put in a straitjacket? Well, getting someone in the BJJ gift wrap is similar to that, only you use your arms to trap theirs instead of a shirt. Positionally speaking, you’re on top of your opponent, similar to mount, but also halfway behind them, like when you’re attacking the back. IT’ll get clearer as you go through this article, I promise.

The BJJ gift wrap opens up a whole new world of opportunities. Why should you use it? Well, mount and back attacks are extremely well known and there are many great counters and defenses to them. Now, if points are what you’re after, you can go into mount or back and stay there until you win. IF you want to go on the attack though, and submit a very defensive and experienced opponent, consider the gift wrap. It’s the ultimate submission hunting position with the only escapes leading to mounting or back control.

Nasty controlling positions and even nastier submissions are available to learn from a grappling expert! Matheus Diniz has a DVD set out named “Position To Submission” and it is nothing short of astonishing. Read our review and be sure to order your copy fast!

Th BJJ Gift wrap is not a position you’ll encounter often. Many people see it as a transition between the mount and back. This is because many people do not utilize the correct grips that actually make the position. The gift wrap is really easy to get, and perhaps even easier to retain. LKet’s see how it works.

For the gift wrap, you need to have the opponent on his side, at least initially. The position of your legs is fairly simple – they should be in combat base more or less.  Since the opponent is on the side, you want them to stay there, so that you can torture them as long as possible. This means preventing them from rolling on their back, which is where the knee comes in. Your knee needs to be on the back of their bottom shoulder, shin parallel to their spine. The other leg is over the opponent, foot on the mat and heel dug into their abdomen/sternum.

Now, for the grips. This is what really makes the gift wrap a potent controlling position. You want to have one arm around the opponent’s neck, ending up in front of them. This is the arm that’s nearer to the opponent’s head, of course. You simply put your elbow behind their head and your palm in front of their bottom shoulder. The goal is to use your other arm to guide their top arm’s wrist to the arm wrapped behind the head. Once you control their wrist with your hand, pull back your elbow. You’ll wrap their own arm around the front of their neck/face while placing a wedge behind their head (your forearm) at the same time. Perfect control that leaves you with a free hand as a bonus!

Getting To The Gift Wrap

Getting to the gift wrap position is easy from a multitude of positions. Today, we’re just going to focus on getting there from the back and the mount. Remember that the grip is essential for this position. You need to have their own arm wrapped around their head, or there’s no control. Once the arm is wrapped, they won’t be able to move forward or back and you can look to attack.

To get into the BJJ gift wrap from the mount, you need to force your opponent to one side. The easiest way is to simply transition into combat base when an opponent tries to bump you off. Just make sure to have both arms available. A more offensive option is going for an Americana, or simply pulling on an opponent’s T-rexed arm.  Basically, anytime you can get an opponent’s wrist to the mat on the opposite side, you can gift wrap them. Use your same side arm to control their wrist until you successfully use it to your other hand for control.

Form the back, things are even easier. From hooks and seatbelt control, use your top arm to catch the wrist of the opponent’s opposite arm. You might even start off a Kimura grip and work from there. Once you have control of the arm, simply swing your opponent to the desired side. remember to pull the bottom leg out so you can place the shoulder wedge with your knee. You’re now ready to torture your opponent.

Form the BJJ gift wrap you have plenty of attacking options. In fact, you can choose whether you like to finish or place crushing pressure n your opponent first. For pressure placement, simply turn your top leg with the foot towards their head. Actually, it is very similar to the S-mount position. The point is to place your weight on the side of their floating ribs. It is unimaginable pain that’ll sometimes get you a tap on its own.

Next, submissions. Since you’re already in the pressure (S-mount-like) gift wrap, why not get an armbar? It is as easy as threading in your free arm and throwing the bottom leg over their head. When you’re going for the armbar from here, remember to stay really heavy until you swing the leg over the head. The goal is to completely restrict movement before you submit.

The triangle choke is also readily available. When you’re in the basic gift wrap, you have the perfect leverage to open up the opponent’s neck. Make sure you control their wrist with your free arm so that they don’t bother you when entering. A triangle is as easy as pulling the trapped arm towards you and guiding your top leg in place. You can finish mounted or from the back, but I prefer staying on top.

Finally (although not ultimately), there’s an easy and fast choke you can sink in immediately from the gift wrap All it takes is to adjust your grip ever so slightly. The goal is to thread your free arm under the trapped arm and over the opponent’s neck. Your arm should end up sticking above their ear. To finish, pull on the trapped arm while forcing your opposite side forearm into their neck.