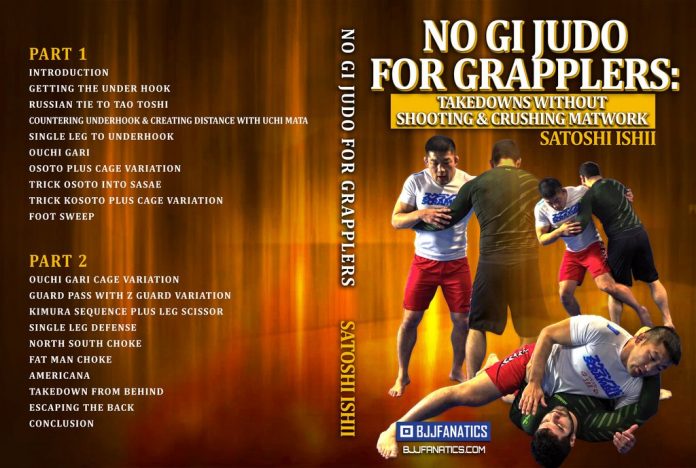 Judo for Gi BJJ takedowns and wrestling for No-Gi, right? That is the commonly accepted theme in BJJ when it comes to the standing game. It is very logical, as Judo is all about manipulating people with the help of the Gi. On the other hand, wrestling is all about shooting for takedowns, collar ties and 2 on 1 grip. Well, what if I told you that this doesn’t have to be the case? A certain Ronda Rouse sure proved how effective Judo can be without the Gi. Moreover, lots of academies worldwide often teach single and double leg takedowns in Gi classes. Now, one of the greatest Judokas of our time gives hi two cents on “No Gi Judo For Grapplers” in the brand new Satoshi Ishii DVD Instructional.

ON SALE HERE:
Satoshi Ishii – No Gi Judo For Grapplers 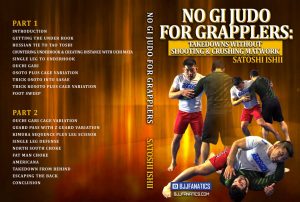 Judo is one of the best grappling martial art in the world. Well, apart fromBJJj, of course. Joking aside, Judo’s prowess is undisputed, at least when it comes to throwing someone down to the ground in a highly effective manner. However, in MMA or No-gi Jiu-Jitsu getting the Judo grips people are used to is a real hassle. unless you’re just as good at BJJ as you are in Judo. Satoshi Ishii certainly is, and he has lots to share on the subject. The “No Gi Judo For Grapplers” Satoshi Ishii DVD instructional is the one resource that is going to teach you how to use Judo in stations when there’s no Gi to cling on to.

For most of us, the term No-Gi Judo might seem odd.that’s because it is. Judo is a highly traditional grappling martial art. in fact, we have judo to thank for the formation of BJJ and the precursor for today’s modern BJJ Gi design. The two arts share a lot, so it is common to seep people in each art using a move from the other. However, when the Gi comes off, Judo tends to become a lot more difficult.

However, if you have an Olympic level Judoka, who is the pride of Japanese Judo, Gi or No-Gipeople are going to go flying. Satoshi is one of the best Judo practitioners of today, he keeps proving both in MMA and grappling. His Judo is most definitely on a different level than most. As such, he is in a pWhy listen to Satoshi? Well, apart from being such a Judo badass (Olympic and All Japan Judo Champion) he is also a Yuki Nakai BJJ black belt. For those that do not know who Nakai is, he is a Carlos Gracie Jr. black belt.

“No-Gi Judo For Grapplers” is the second Satoshi Ishii DVD instructional to come out in quick succession. The first one was all about ‘Japanese Judo Secrets” and was a Gi instructional. Now, Satoshi makes sure he covers all bases by covering how Judo can work in No-Gi settings as well.

As a Japanese life long martial artist, Satoshi thrives on discipline and organization. Conversely, his “No-Gi Judo for Grapplers” DVD is highly organized and meticulous. in it you get two volumes, each with well over a dozen chapters. In both volumes, Ishii covers No-gi modifications of some of Judo’s most high percentage moves.

The first portion of this Satoshi Ishii DVD instructional covers some basic clinch fighting along with the essential sweeping techniques of Judo. The second one goes into throws, but also covers submissions, escapes and even guard passing. Of course, everything is tried and tested and works with a very high degree of success. On a different note, Satoshi explains things really well, and the sound and video quality are pretty much flawless.

The first volume, as we previously mentioned is all about foot sweeps. As usual, it starts with an introduction that covers Satoshi’s take on No-gi Judo, and how you can get the fight to the ground. In order to make things crystal clear, he then covers some basic tie-ups from standing positions. For example, he demonstrates variations of the underhook and how it can open up Judo attacks without the Gi. He also goes into a wrestling classic – the Russian tie and gives it a new and innovative Judo dimension.

On the subject of foot sweeps or Ashi Waza, there’s hardly anyone better than Satoshi. He starts off easy with the Ouchi Gari and then moves on to things like Osoto Gari and its variations. He also covers some trick setups for the Osoto than end up with different takedowns, like Kosoto and Sasae. There are also a few counterattacks, mostly when an opponent attempts to udnerhook you.

The second portion of this Satoshi Ishii DVD Instructional truly brings Judo and Brazilian Jiu-Jitsu together. Here, Satoshi teaches a BJJ/Judo hybrid that includes guard passes and a ton of submissions. Given how difficult No-Gi guard passing is, I really enjoy his take on passing the guard, particularly the Z-guard.

The submission portion of includes some Judo classics, this time done in No-Gi style. Of course, you get a long and detailed version of the Kimura, along with a complete sequence to wrap things up. There are also some crucial North-South choke details, and the Fat Man Choke is certainly an innovative way to strangle people. And no, there’s no need to e fat to do it. Some defensive moves wrap up the No-Gi Judo For grapplers DVD, mostly by showing back control escapes and single leg takedown counters.

Why You Need To Get It

The reason you need this Satoshi Ishii DVD Instructional is simple – better takedowns. It doesn’t matter if you’re a D1 one wrestler, or a black belt Gi only BJJ competitor. “No-Gi Judo For Grapplers” is a DVD set that’ll open up some new perspectives for you. Understandably, the things outlined here are also very applicable to the Gi. In fact, gripping differently when in a gi match might really throw your opponents off. Conversely, going for Judo moves without the gi is also a huge element of surprise. All in all, you need this BJJ DVD to become a better overall grappler, both standing and on the ground.

ON SALE HERE:
Satoshi Ishii – No Gi Judo For Grapplers