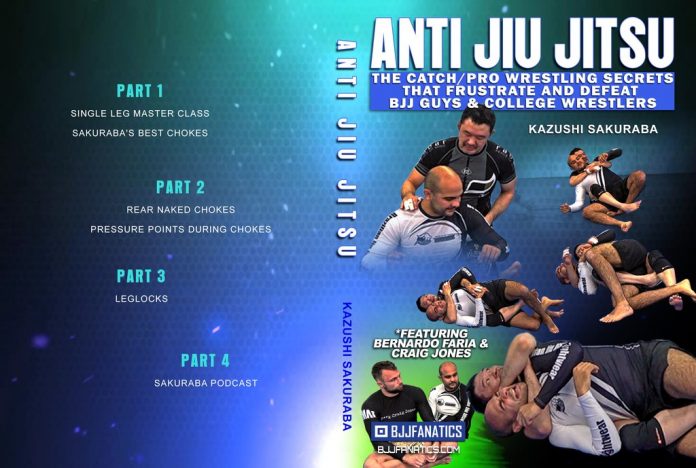 So, not so long after his very first modern BJJ DVD release, Kazushi Sakuraba is back with yet another instructional. We can’t say we’ll mind, as everything Sakuraba related is always entertaining, to say the least. This time, Sakuraba provides us with his original take on Anti Jiu-Jitsu. In short, it is an instructional on how catch wrestling can be used to beat BJJ. If it was anything else but a Sakuraba DVD, this instructional would probably never be considered seriously. However, given Sakuraba’s background, you can bet this instructional is going to have some crazy grappling move that nobody’s thought of. 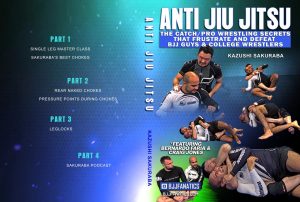 The famous, or infamous, depending on how you look at it, “Gracie Hunter” is going at it strong once again. Sakuraba sure seems relentless, as he will probably never retire from martial arts. We can’t say we mind, though, particularly with stuff like the Anti Jiu-Jitsu Kazushi Sakuraba DVD coming to light. Who better to divulge the secrets of catch-wrestling than one of the most seasoned catch-wrestlers of all time? After all, BJJ is turning to catch wrestling for advice more and more often in modern times. This time, though, there might even be more answers that there are questions.

Of course, you can expect Sakuraba to name his grappling instructional “Anti Jiu-Jitsu”. After all, not many others will, correct? Regardless, his take on the supremacy of catch-wrestling over BJJ is about to get tested by thousands of grapplers worldwide. Will it stand up to the claim that it can “frustrate and defeat” BJJ? We’ll see. Let’s not forget that the “Almighty” Gracie Hunter also claims this instructional will help you stop collegiate wrestlers in their track.

There’s no question that catch-wrestling is one of the oldest submission grappling martial arts. As such, it is also the one that’s more similar to BJJ compared to others. Namely, without the restraints of tradition or Olympic rulesets, which bound sports like Judo and wrestling, catch wrestling was always free to evolve. As such, it morphed through the years, adjusting its techniques along the way. In fact, as forgotten as it is today, catch wrestling is actually still evolving.

The modern evolution of catch, though, only happens along with Brazilian Jiu-Jitsu. The fact both arts feature lots of submissions and do stretch outside any boxes, means they’re perfect for each other. As such, BJJ has a lot to learn from catch wrestling. All it takes is someone that really understands catch wrestling and BJJ to connect them together. Rest assured, the name of this Sakuraba DVD might be “Anti Jiu-Jitsu” but the contents are the staples of the next level of BJJ without a doubt!

Kazushi proved to the world how efficient his brand of catch wrestling can be on multiple occasions. Apart from his crazy career as a catch and professional wrestler, Sakuraba is also an old-school MMA standout. He fought literally everywhere that mattered, from the UFC to Pride and K1. Currently, on the Rizin roster, he is also very active in the ultra-entertaining Quintet Grappling tournament that he founded.

Sakuraba’s previous DVD instructional, “Kimura Hunting” really brought together the catch-wrestling double wrist lock and BJJ Kimura submissions together. The instructional explores Sakuraba’s own Kimura hybrid, one that brought him significant victories. Among those are a couple of notable Kimura wins over and Royler and Renzo Gracie. after the great reception of this instructional, the latest Sakruba DVD goes even deeper into his grappling philosophy. Now, he demonstrates multiple aspects of his catch wrestling-Jiut-Jitsu hybrid that made him one of the most fearsome grapplers of his time.

The “Anti Jiu-Jitsu” Kazushi Sakuraba DVD has 4 volumes, in which his ukes are once again Bernardo Faria and Craig Jones. The key goal of this instructional is to teach you how to get control over an opponent long enough so that you can finish a submission. While in Gi Jiu-Jitsu this might not be a huge thing, it is crucial for success without the Gi. Sakuraba is a real submission machine, able to get a tap from every angle. His innovative take on submission grappling provides answers to common BJJ questions. Solutions include different leverage points and even pressure points to ensure you break through any resistance. Let’s look at some key chapters.

The way this Kazushi Sakuraba DVD is structured is in four volumes, each of them containing only a couple of chapters. In fact, two of them only has a single chapter. Still, one being the third volumes on the subject of leglocks, somehow I think it’ll be everyone’s favorite.

The reason the chapters are so few is that each represents a masterclass. Look at it as a seminar on a given subject by Sakuraba, Faria, and Jones. The first volume addresses single leg takedowns from every possible angle until halfway through. The second portion is a completely different masterclass, this time on chokes. Of course, you get a lot of variations on common chokes, along with some Sakuraba “Anti Jiu-Jitsu” specials.

The second volume also contains two separate masterclasses. This time, it is all about rear naked chokes in one masterclass, and pressure points in the other. the pressure point masterclass is once again about chokes, ensuring you really get a finish even against hardcore grapplers. In that sense, this DVD really is a blueprint for beating the best submission defenses BJJ and wrestling have to offer.

Of course, there’s no need to discuss Sakuraba’s leg locking pedigree. He is, after all, the quintessential leg locker in the world of grappling and MMA. This time, he really goes deep into his leg like philosophy and reveals some truly innovative concepts. The final volume is a podcast where Sakuraba shares his thoughts on submission grappling and how catch wrestling can be used to defeat straight up BJJ and wrestling.

All in all, any Sakuraba DVD is worth having, if it is only for the entertainment factor. However, this one is solid all over. It is entertaining (that’s a given) but it is also highly informative. It has some old catch wrestling staples that come as new to everyone in the modern grappling world.” Anti Jiu-Jitsu” is a great way to take your game not only to a new level but in a completely new direction than modern grappling.