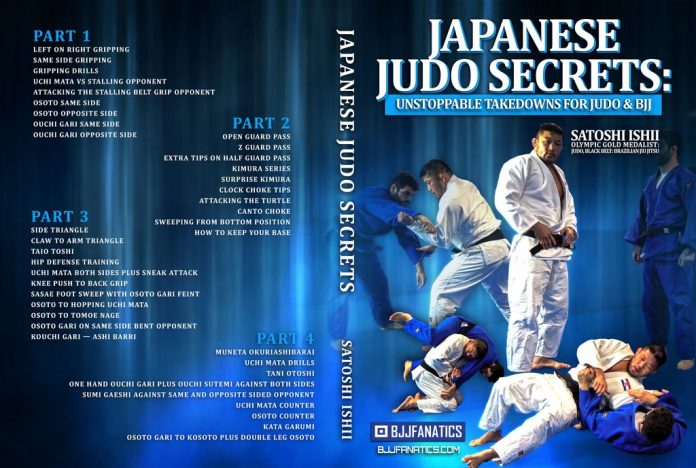 There are people in grappling that are outstanding competitors and champions, and then there are legends. Achieving legendary status in combat martial arts is an achievement not many can claim. In terms of grappling, and particularly Japanese Judo, Satoshi Ishii is as legendary as it is possible! The 32-year-old is still going at it, active in MMA and one of the best grappling competitors alive. At long last, there’s now a Satoshi Ishii DVD that’s here to help us learn how one of the best has used Judo to gain success in multiple combat sports. The “Japanese Judo Secrets” DVD set is out, and it reveals everything Satoshi knows about Judo for BJJ an MMA. 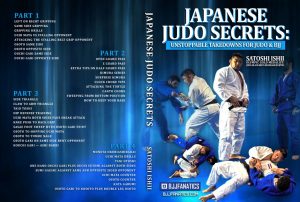 Judo is the martial art that influenced the development of Brazilian Jiu-Jitsu directly. Maeda was a renowned Judo master and that is exactly how he came to the attention of the Gracies. The rest, as we know it, is history, as the Japanese traditional art subsequently gave birth to the ultimate grappling system in existence. to this day, we still use Judo a lot when we’re training Jiu-Jitsu. I come from a Judo background and, despite really liking parts of wrestling, still like it as my go-to supplemental art, particularly for standing. Imagine how stoked the Satoshi Ishii DVD got me, particularly because it is heavy on footsweeps, which are my absolute favorite! Time to reveal some of Judo’s best-kept secrets!

Satoshi Ishii is a true legend of Judo. Why? Well, he won an Olympic gold medal at the 2008 Bejing Olympics. He also has a silver medal from the 2006 Asian games. And he is a two-time champion of the ALL-Japan Judo Championships, which in Japan, is a bigger deal than the Olympics. This is all without even mentioning his 28-8-1 professional MMA record. At 32 years of age, he is still active in MMA and has a lot more successes coming. 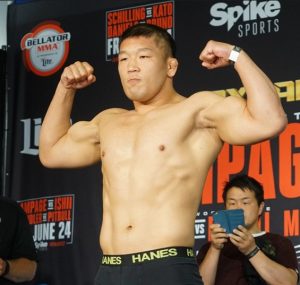 Satoshi is also the depiction of the Japanese Samurai spirit. Even as early as his MMA debut in 2009, Ishii never wanted an easy introductory fight and didn’t get one. his first pro-MMA match was against the much more experienced Hidehiko Yoshida in Dream. From there on Ishii ha fought the who is who of MMA heavyweights over the years. This includes legends like Heath Herring, Quinton Rampage Jackson, Mirko Cro Cop, Pedro Rizzo and a bunch of others. Out of those efforts came a huge friendship with Cro Cop which led to Ishii moving to Croatia to help the national Judo team.

Grappling-wise, we last saw Satoshi in the all of the initial 3 Quintet grappling championships. he also has notable performances at Polaris. Just recently, Satoshi got his Brazilian Jiu-Jitsu black belt from Yuki Nakai who is a black belt under Carlos Gracie Jr. Now, even though he is bang in the middle of his career, the Japanese legend decided to issue the Satoshi Ishii DVD to once and for all clear up Judo for BJJ.

This DVD is truly a masterpiece. Satoshi is a real master of Judo, which is apparent from the very first second. He is also a heavyweight that moves like a featherweight, meaning his moves will work for everyone. Satoshi also speaks perfect English and is one of the best teachers I’ve ever had the pleasure of listening to. A lifetime of two-a-day Judo sessions would do that to you.

The “Japanese Judo Secrets” Satoshi Ishii DVD is a roadmap for everyone looking to improve their Judo for grappling and/or MMA. lacking takedowns? You’ll learn the most effective moves that have been perfected for centuries. Lacking takedown defense? You’ll become almost as unbeatable standing as Satoshi is himself! PLus, do not forget that Ishii is also a black belt. that means you can expect great connections between throws and passes and submissions. After all, Ishii is a huge fan of the Kimura!

IT all starts with the grips. if you’ve ever trained Judo, you know how much time and effort Judokas spend training their grips. it’s not all about strength though, as grip sequences and grip fighting is the precursor of effective throws and sweeps. Satoshi simplifies greatly a very complicated part of Judo and gives it a very practical context.

The first half of this volume focuses on the art of grip fighting. You get a really clear outline of how both same and opposite side grips work, what you want to achieve with them, and how to prevent your opponent from getting them. He even covers belt grips as he goes int strategies to deal with a stalling opponent.

The second portion of this DVD are basics of foto sweeps. Once again, he goes over Judo staples that you get to learn from white belt onwards – the Osoto and Ouchi Gari

The second volume of this Satoshi Ishii DVD is the most BJJ specific one. Here, Satoshi takes a short break from specific Judo techniques and works on connecting Judo and BJJ. Namely, he goes over some guard passing options and some submission options. Normally, they’re all intended to work right after you get someone down by using effective Japanese Judo techniques.

Most of the passes are about dealing with open guards, but there’s also a very sick Z-guard pass in there. Half guard passing closes the section and leaves the stage to submissions. Of course, Satoshi’s signature Kimura features heavily here. he has a complete series that’s based on the Kimura, ending with a really cool sneaky Kimura setup.

Another submission that’s really big in Judo is the clock choke. Ishii also goes over it wit ha fine tooth comb, revealing all its powerful secrets. The canto choke is also covered, along with a bunch of ways you can use both chokes to destroy the turtle. The very last chapter is one that’ll benefit BJJ guys with no Judo or wrestling background the most – how to develop and keep your base.

The Art Of Throwing

DVD 3 gets back to Judo with a bang. You can see that Satoshi is a huge fan of foot sweeps or Ashi Waza. You get a whole bunch of Osoto Gari based setups that all but ensure you get someone down. In fact, Satoshi uses foot sweeps to set up other throws like the Uchi Mata and Taio Otoshi. Here, you also get to learn how more complicated combinations like Kouchi gari to Ashi Barai work.

A very important chapter on this volume is the one about hip defense. it is a concept you absolutely have to master if you aim to stop Judo attacks before they even happen. Satoshi also covers some triangle chokes here, in the form of the side triangle and claw arm triangle.

Yasuyuki Muneta is another huge Japanese Judo legend that was incredible with the Okuri Ashi Barai in particular. Now, this Satoshi Ishii DVD uncovers the secrets behind the Muneta Okuri Ashi Barai in detail! Some much-needed drills also feature in this volume. The Uchi Mata is arguably the most difficult Judo throw to master, and you can’t do it without drills. Ishii offers some killer Uchi Mata specific drills to help you master the move quickly.

Also, this is the volume that’ll apply to smaller grapplers and people who like to pull guard the best. Here, Satoshi goes over the Judo throws that have you going to your back and pulling an opponent up and over yourself. Same and opposite sides Sumi Gaeshi setups are covered in great detail.

A lot of counter-throws to common Judo throws announce the end of this magnificent Satoshi Ishii DVD. However, there is one more sneaky throw setup hidden in the very end. The Kata Guruma or fireman carry is a very effective throw, once you know it like Satoshi. And, with the help of the Japanese Judo Secrets DVD, you will.