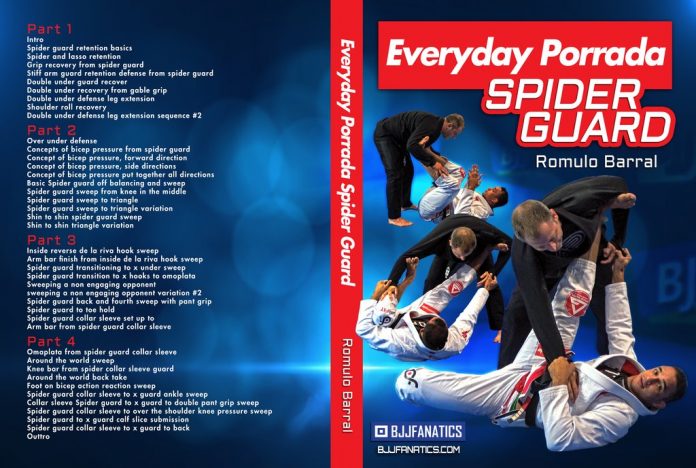 The BJJ spider guard is nothing new. it is a well established Gi guard, that works amazingly. It is considered to be an advanced guard and works better if you’re more experienced in Jiu-Jitsu. Still, the spider guard is so full of nuances that it takes a lot of time and hard work to master it. If there’s someone that knows all about hard work, it’s Romulo Barral. After all, the whole “everyday porrada” modern BJJ movement is down to him. Now, Romulo blends two of the things he has as his legacy- the spider guard and his everyday porrada approach. The end result is the “Everyday Porrada Spider Guard” Romulo Barral DVD. 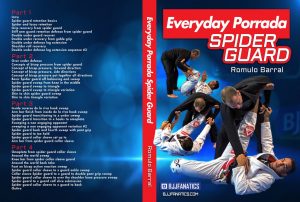 In the world of leg locks and lapel guards that have as crazy names as they do setups, going over some other BJJ basics is often forgotten. The spider guard is not something we see regularly in competition now, although it was unmistakable just a few years ago. The evolution of BJJ brings about new exciting moves and that’s perfectly ok, but we can’t forget about the basics. Especially not about the highest percentage moves and positions. The spider guard is as high-percentage as it gets, once you get the hang of it. And there’s a literal hanging involved, along with a lot of finger joint pain until you master it. The way to mastery is in the latest Romulo Barral DVD. I’ll spare you the pain and cut the time you need to implement it in half.

What is #Everyday Porrada”? Read THIS article to learn everything about the latest BJJ movement.

Romulo is one of the toughest competitors to ever step on the Jiu-jitsu mats. He is a Vinicius Magalhaes black belt that competes at medium heavy. His spider guard and triangle are nothing short of notorious! In fact, Romulo is such an accomplished competitor that, despite numerous world and championships at both master and adult, he was also awarded the title of best BJJ grappler (Graciemag, 2007).

Barral’s impressive Jiu-jitsu journey began in Belo Horizonte, Brazil, at the age of 8. Similarly to many Brazilian Jiu-Jitsu standouts of his time, he started training taekwondo. Unlike many other Brazilians that transferred into BJJ, though, Romulo stuck with it for over a decade, achieving a black belt. At 15, he also started to train at Gracie Barra with Vinicius  “Draculino” Magalhaes. he got his black belt in 2005 and has since established himself as one of the top black belts in the world, at both his weight and absolute.

In terms of style, Romulo is a big proponent of Gi Jiu-Jitsu. Spider guard prowess. His choice of favorite weapons the spider guard and triangle) outlines this as well. To be honest, the 7x World Champion can beat people with pretty much anything. One of those titles comes in No=Gi as well, showing how versatile Romulo is. Yet, the subject of the “Everyday Porrada Spider Guard” Romulo Barral DVD is all about his go-to position that has never failed him in a match.

What makes the spider guard so special? Well, for one, it is extremely hard to break the grips. As we know, breaking grips is one of the key prerequisites of passing any guard in Jiu-Jitsu. Secondly, the spider guard actually works best if the opponent’s stepping forward into it, contrary to all other guard variations. Finally, it provides immense control over the shoulders and arms, Allowing for complete domination of posture.

The spider guard is quite simple, at least in terms of body position. What you need is to control both sleeves of the opponent with your grips. You then place both feet on the opponent’s biceps muscles, as close to the elbow joint as possible. In order to really play the guard, you also need a good angle which you can achieve with hip movement. From there on, your hips an extension and/or flexion of your legs dictate what’s going to happen. As long as you have the grips and feet on the biceps, your opponent has no passing options whatsoever.

The options the spider guard offers are pretty much endless. Sweeps are easy to come y in every direction and there are a bunch of submissions available. Moreover, transitions int other open guard or hybrid guards like the De La Spider etc are also there. Now, with the Romulo Barral DVD, the lid is completely lifted off the spider guard. Everything of the above plus so much more is now explained and demonstrated in detail!

The “Everyday Porrada SPider guard” Romulo Barral DVD set is divided into four volumes. Starting off slowly, Romulo goes deeper and deeper into the spider guard as volumes progress. While the spider guard is an advanced guard, some aspects of it are easy to grasp even for beginners. The first, and perhaps second volumes are literally for everyone. Volumes 3 and 4 are for experienced blue belts/early purple belts and above. This does not mean you should not get and watch the entire set. Just focus your efforts on what’s appropriate for your level, and you’ll do great.

The instructional opens up with an introduction into the spider guard by Romulo. he outlines what the spider guard is, and what’s his way of playing it. he also shares what’s about to come in the other volumes.

The first aspects of spider guard Romulo cover after going over the initial positioning are retention and recovery. The ability to hold the spider guard is essential, so you first get to learn all about retaining the regular and lasso spider guard. Subjects include grip recovery and stiff arm spider guard retention.

On the subject of recovery, there are plenty of ways to recover from a very common threat – the double-under guard pass. In fact, there are 5 different ways to do it, out of which, the shoulder roll is the one that did the trick for me. All in all, the retention and recovery methods in this Romulo Barral DVD are going to ensure your spider guard stays in place until you see fit to release it.

Sweeping from the spider guard is extremely easy under one condition – the correct angle. When you get your opponent in the correct spot, sweeping is as easy as shifting your hip, or just extending a leg. In order to make sure you get your opponent off-balance, Romulo shares his secrets on maintaining biceps pressure. he is extremely thorough about it, offering tips about pressure in each of the four main directions. At the end of the section on biceps pressure, he puts all of them together in a working system.

Romulo then moves on to talk about his off-balancing principle that works 100%. Normally, it flows right into sweeps, the first one from the basic spider guard position. Other sweeps include shin to shin hybrid guards as well as sweeping straight into submissions .unsurprisingly, Barral’s favorite triangle choke is the submissions of choice.

The second half of the “Everyday Porrada Spider guard” Romulo Barral DVD moves on to more advanced concepts from the spider guard. Here. Barral starts off with the reverse De La Riva guard hybrid. After a sweep and armbar finish, he moves on to explore some common spider guard transitions. Romulo’s “X hooks” are amazing and offer great attacking options, like the Omoplata.

Speaking of submissions, the spider guard is a real gateway to any submission category you like. If you master the spider guard, all your favorite submissions are going to be easy to access. Romulo demonstrates as many different ones as he can, including toe holds, armbars, and chokes. A bunch of more spider guard sweeps (this time with pants grips) rounds off volume 3.

The first thing Romulo shows is an omoplata, from a modified collar sleeve spider guard. Advanced, but as high percentage as any of the more fundamental things. The around the world sweep Romulo is known for also features here, with an in-depth analysis. Not only that, but there’s a road straight into back mount using this sweep.

Other impressive attacks include kneebar off the collar sleeve variation, a spider guard -> X-guard -> calf slicer combo and even more back takes. Sweeps make u a large portion of this final volume of the Romulo Barral DVD too. Most of them start from the collar and sleeve spider guard, but some feature transitions into the X guard as well. Barral wraps it up with a short outro and leaves no questions unanswered.