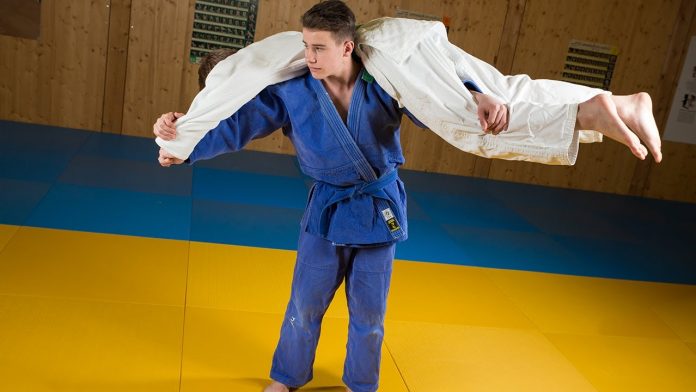 Great judo throws are usually not only great in the Judo context. Most of them translate perfectly to Gi Jiu-Jitsu as well. On rare occasions, you get the moves that work in Judo, Gi BJJ and No-Gi Jiu-Jitsu. This is as good as it gets when you’re looking to get the fight to the ground. Not many moves fit into that category. One of the few that does is the Fireman’s Carry or Kata Guruma. The Fireman’s Carry Frenzy is a Matt D’aquino DVD set that completely explains the move and all its variation. Time to re-introduce the Kata Guruma to your BJJ takedown arsenal.

A Judo Olympian with a great understanding and experience in BJJ, teaching move from the one art to use in the other is always a winning combination. We’ve seen it before with high-level wrestlers, or even sambo guys. Since we’re in the art that likes to use everything that works, we’re getting the benefit from it all. The Fireman’s Carry is one of those throws that look hard and complicated but is actually really easy to learn. This Matt D’aquino DVD is all you need to give your standing game a whole new dimension. Oh, and you won’t have to rely only on the basic Judo version – there are a bunch of awesome variations in there!

Matt D’Aquino And The Fireman’s Carry

Why is Matt D’Aquino the man to teach you this particular move? Well, first of all, he is a high-level 4th-degree Judo black belt, That gives him more than the right to teach people ways to get somebody to the ground. The 33-year-old Australian was an active Olympic competitor until 2012 when he retired from a very rich career in Judo. As he did so, his focus shifted to Brazilian Jiu-Jitsu. the end result is a grappling style that’s a unique blend of the two arts. And the main reason for it is that Matt knows what Judo moves work in BJJ and vice versa.

In fact, Matt had tremendous success with the Fireman’s Carry in particular. During his Judo day, she not only used it to score the all-important Judo ippon but also to transition when on the ground. The movie itself might be nothing new to Judokas, but for some reason, it is not something we see in high-level Jiu-Jitsu often. This is exactly why you can use the Matt D’Aquino DVD to make the kata Guruma your secret weapon.

The Kata Guruma is one of the 40 throws that Jigoro Kano himself created. It is one of the first moves Kano developed, back when he was a young Judo practitioner. The throw is the result of Kano’s quest to beat a large and very talented student and training partner. The goal of the move is simple. Get your partner on your shoulder, like a log, and drop them to the ground. While it may sound like this takes a lot of strength it is actually quite the opposite. The Kata Guruma is a very technical move that doesn’t ‘t always require you to have your opponent as high up as you may think.

The Fireman’s Carry Frenzy System is a Matt D’Aquino DVD set that consists of three different volumes. In them, Matt goes over 21 ways of using the Kata Guruma to throw an opponent. Subjects include the original variation, as well as a host of modifications to make it a lot more efficient for BJJ. Actually, the instructional is the final result of years of hard work. Matt has a whole Fireman’s Carry system that he spent years developing. It works like a charm though, and he is now sharing all the juicy details with you.

One of the major reasons why I liked this DVD from the get-go is that Matt offers No-Gi options as well. He makes the Fireman’s Cextremelyemely simple and likes to use similar grips for every setup. This reduces unnecessary clutter and makes the system easy to follow and learn. After a couple of weeks of drilling, you’ll be able to use this move in sparring and even in competition.

The DVD’s quality is great, with no audio or video glitches or drawbacks. There’s a clear progression throughout the volumes and it is very easy to understand the system. Matt brings you the opportunity to choose to specialize in one variation or use the complete system.

The first volume of the Matt D’Aquino DVD starts with a very important subject. Well, ok, the very first chapter is an introduction to Matt and the Kata Guruma, but when is it not. The thing I’m talking about is chapter two, where Matt goes over the possible counters your opponent has and how to avoid them. An obvious threat when going for a Fireman’s Carry is the crucifix. D’Aquino has a great way of eliminating this threat from the beginning.

What I also like a lot is that Matt goes over all the variations in the beginning, so that you have an overall understanding of the system before learning the details. from there it is all about getting the “traditional” version of the Kata Guruma, which involves you standing upright with the opponent on your shoulders. You’ll learn setups with the lapels, combinations with other throws and ever re-counters to common defenses. As far as fundamentals go, you do not need anything more than this first volume.

The second volume goes into a dimension of the Kata Guruma that I personally think is the best for BJJ. It is the Drop Fireman’s Carry, where you get to go to the ground and use it more as a takedown than a throw per se. It all starts with grip fighting, or grip breaking, to be more precise. Grips are the key details that make or break the drop Kata Guruma, so pay close attention to Matt’s instructions here. The first few chapters are all about getting the correct grips to attack.

As a former Judoka I never really gave the “retreating Frieman’s Carry” much thought. It is actually an amazing variation and something that Matt has down to perfection. After four dedicated chapters, you’ll also be able to execute this move and a couple of variations like you’ve been doing it your whole life.

Wrapping things up here are a few interesting combinations. A great example is the “wrong leg firmans” which, as it turns out, is not so wrong after all. A few extremely efficient fakes (tested in the gym) conclude the second volume of this Matt D’Aquino DVD.

Finally, it’s time to take the Gi off and keep hitting Fireman’s Carries like it doesn’t matter. Similar to disc 1, matt first covers the dangers of exposing your back, and how to avoid them. After that, its real Fireman’s Carry Frenzy! Form the basics, through using the irreplaceable 2 on 1 grip all the way to hitting the Kata Guruma from the front headlock.

In a No-Gi setting, Matt likes to combine other takedowns to set up the Kata Gguruma. Given the lack of grips, this makes a lot of sense. Here, you’ll learn how to use the double leg, snap-down, inside tie and a bunch of other wrestling staples to get the Fireman’s Carry. Both the standing and drop versions are also available in No-Gi.