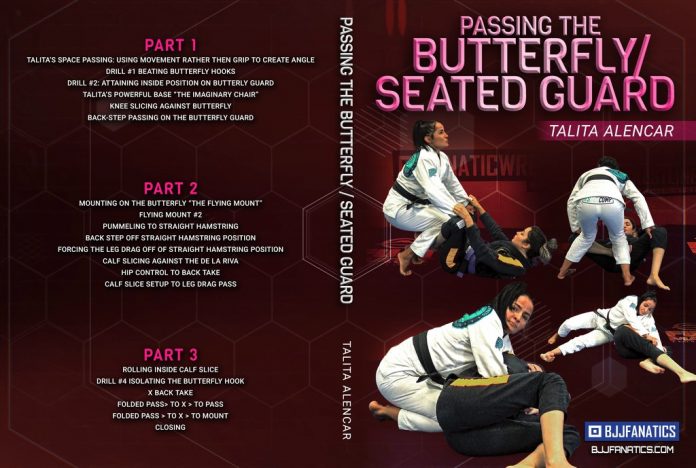 Talita Alencar is one of the best female grapplers out there, having won just about any world title out there. She is a featherweight that has exceptional technical knowledge of the game. Moreover, she has a very aggressive but precise grappling game, making her a force to be reckoned with in both Gi and No-Gi Jiu-Jitsu. As a competitor, she still has a lot to accomplish, but she also has plenty to share and teach the grappling world. Luckily, she decided to do just that in-between competing. She provides us an incredible Talita Alencar DVD titled “Passing Butterfly Guard”. And, for all those wondering it is a Gi instructional.

The butterfly guard is always going to come back as a riddle as new techniques and concepts emerge. In Jiu-Jitsu, if you’re trying to set something up from the bottom, you probably have a butterfly guard version of it too. That means the guard I notoriously hard to pass, and it gets harder with every new trend that emerges. Leg locks were the latest thing to really make the Butterfly guard a fortress. Still, top-level competitors do not shy away from figuring out even the most difficult positions and how to deal with them. The “Passing Butterfly Guard” Talita Alencar DVD is actually a very detailed one. It branches out into ways to shut down the seated guard and other related guards as well.

Talita is one of the ladies of BJJ that looks like a friendly outgoing girl next door that can crush you in an instant. She is a real monster on the mats, and I mean that in the most positive way possible. She is a black belt under Theodoro Canal and comes from the much less known Oswaldo Fadda lineage. Her accomplishments so far, though, are nothing short of marvelous. 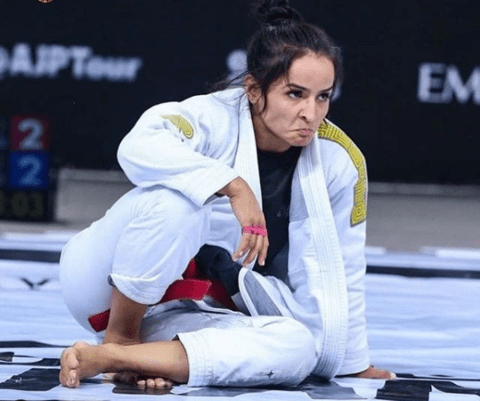 Alencar is a Gi and No-Gi World and European champion. She’s also a Pan Gi Champion and a Grand Slam winner. She represents Alliance and is also a big part of the submission only No-Gi scene as well. When it comes to her game, Talita is a very well rounded grappler, without holes in any particular aspect of her game. That, along with her signature pressure and aggression based style is the perfect combination for one of the best grapplers of our generation.

Originally from Brazil, Alencar started training in the Gracie Barra gym in Fortaleza. Moving to Rio meant she changed academies. She ended up in Theodoro Canal’s academy as a blue belt and stayed with him since. She got her black belt on the podium of the 2016 IBJJF World Championship. As a black belt, she has some very notable performances and wins against some of the top female grapplers in the world. This Talita Alencar DVD is I think a first for her, and certainly a first fo the wider BJJ community. However, the subject of passing butterfly guard is a highly sought after one, so I went into this review with very high hopes and expectations.

The conundrum with the butterfly guard and all associated guards is not a hard one to spot – they’re tough to beat. Finding a way to solve it is what frustrates generations upon generations of grapplers. People that decide to really go deep and play the guard as their main bottom game position are almost impossible to beat. Just take Adam Wardzinski as an example. If he gets you in his butterfly guard, there’s not much you can do. Of course, he will never fare against Talita ina competitive fashion. Still, I certainly hope someone will use her concepts to trey and pass one fo the nastiest butterfly guards in the game.

The trouble with the butterfly and the seated guard is that you have to break your posture as a passer in order to establish grips and find a way through or around the opponent. The problem is that in doing so, you’re offering grips to your opponents. On top of that, they have multidirectional sweeping options as well. Plus, switching from butterfly to seated and back is very easy. This can get you caught up in a nasty loop, ending with you swept or submitted.

In this Talita Alencar DVD, the approach to passing the butterfly guard is somewhat different from what we usually see. That’s why it has hopes of actually working against high-level guard players. She has crazy concepts about the base as well as several flying options that will surprise everyone, particularly leg lockers. Even before I played “Passing Butterfly guard” for the first time I had a feeling I was going to love this particular BJJ DVD.

This might be a first-ever Talita Alencar DVD, but it certainly doesn’t feel that way. The material is highly organized, and Talita is amazing at explaining how things work. On that note, instead of just demonstrating moves, she also shares her way of thinking and approach as she does the demonstrations. That offers a different aspect of her game, allowing for a much better understanding of a subject as complicated as passing butterfly guard is.

The DVD instructional si divided int three parts, each containing sections that cover a different subject. Alencar offers some very innovative and insightful concepts in the opening one. The middle part is all about her innovative ways of confusing opponents and defeating common guards with uncommon submissions. The final portion foes int some pressure based passing options that open up back takes and mount straight away. Extremely high-level Jiu-Jitsu organized in the best possible way.

Before I go into the content of each part of this Talita Alencar DVD, let me mention that you can expect drills to feature in every part of the instructional. Instead of bunching them up in one spot. Talita offers drill in regard to the positions and passing sequences she is teaching. A much better approach, if you ask me.

Straight off the bat, “Passing Butterfly Guard” begins with a very cool concept on crating angles by utilizing movement. In that sense, Talita prefers movement to grip fighting against people in the butterfly guard. This leads to a couple of amazing drills on beating the butterfly hooks and attaining safe inside position. This culminates in what I consider to be the best portion of the entire DVD – the “Imaginary chair” concept. This will help you develop an immovable base as nothing else will. Off of that, Talita offers a knee slice and back step options to demonstrate how exactly you can put her concepts to use.

Obviously, Alencar was going for the spectacular her, starting part 2 with the flying mount. This is an unexpected and unorthodox move that has several variations an is basically a way to mount the butterfly guard initially, before ending in full mount without options for the bottom person to counter. You’ll have to see it to truly understand it.

Talita also likes to use the popular pummeling method of passing as well. A few more backstepping options follow closely. She starts most of her passing sequences from the straight hamstring position. She likes to force different types of passes, from back steps to leg drags. A beyond cool chapter is the one on setting up a direct calf slicer against the De La Riva guard. It will lead to an eventual pass if you can’t get the tap for some reason. Speaking of calf slicers Talita ends with a few more of them, introducing a powerful new weapon against seated guards.

The final part has one more calf slicer to offer before moving on to exploring different avenues of passing. The final drill fo this Talita Alencar DVD is here. it has to do with isolating the butterfly hook completely and rendering it useless. From there on, Alencar focuses on the X pass by getting there with a folding pass. That’s pure pressure right there that leads to either back control or the mount, depending on which variation you choose to use. A short closing wraps up “Passing Buttefly Guards” leaving us with a lot of stuff to think about and try to implement.

This is one of those short and sweet BJJ instructionals that will completely change your game. Talita’s take on passing butterfly guard and all associated seated guards is innovative, battle-tested, easy to understand and appropriate for grapplers of all levels. This Talita Alencar DVD is something to really consider. Especially if you’re stuck in the butterfly guard of leg lockers and Berimbolo players. It is as close to a silver bullet as we can get.