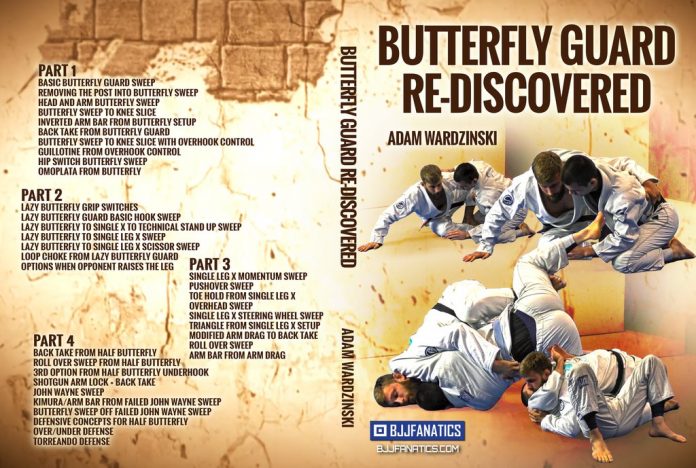 There’s a classic guard out there that is a staple of BJJ open guard. It is the butterfly guard, a simple effective and timeless tool to attack from the bottom. It is one of those techniques that never really goes away, just takes the back seat for a while from time to time. Plenty of grappling legends like Marcelo Garcia has demonstrated how good this position can be. During the old days of glory for the butterfly guard, Marcelo used ti to get to the back or hit a Guillotine Choke. After a short hiatus, the butterfly guard returned with a bang, courtesy of Eddie Cummings and his leg lock game. Now, Adam Wardzinski, a modern-day grappler, fearsome leg locker and legitimate black belt brings it all together. How? Via the “Butterfly Guard Re-Discovered” Adam Wardzinski DVD.

If you follow the grappling scene of today, you’re aware of who Adam Wardzinski is. The Polish grappling sensation has won everything there is at the IBJJF and UAJJF tournaments during the last years. “Megatron” as he is known is a force to be reckoned with, especially when he’s in butterfly guard. He now shares all his butterfly guard knowledge with us via his Adam Wardzinski DVD. It is the DVD we’ve been waiting for since the re-emergence of the butterfly guard. It is not that the old-school Marcelo Garcia stuff doesn’t work. it is about how the butterfly guard first the modern-day game and Adam is unrivaled at demonstrating it.

An Introduction to Adam Wardzinski

A few words on Adam before we continue. He is an accomplished black belt under the legendary Alan “Finfou” do Nascimento. Adam Wardzinski is a pioneer of Polish grappling, at least on the big scene. The heavyweight is a fearsome opponent for anyone in his weight class, as his rich record clearly demonstrates.

Born in 1991 in Poland, Adam didn’t start his martial arts career with BJJ. Although he followed the sport via Youtube, he was a practitioner of Aikido, as per his parents’ wishes. At 18 years of age, Wardzinski had enough of Aikido and finally made the switch to the Gentle Art. His first coach was a Polish grappling legend in Karol Matuszczak, a Roy Harris black belt himself. Adam remained with Matuszczak until his brown belt days.

His path led him to Sweden, and world-renowned black belt Alan “Finfou” do Nascimento. Adam went on to affiliate himself with Nascimento, and eventually earned his black belt in 2016. Wadzinski’s record has 82 wins and 21 losses so far. half of his wins are via submission.

The Re-Emergence Of The Butterfly Guard

So, why is the butterfly guard such an effective position? The key is in its simplicity. for a simple open guard, it offers a lot of submissions and sweeps opportunities. However, this comes at a cost. namely, the position is not one that offers a lot of control over your opponent. At least not initially.

The main goal of the butterfly guard is to get under your opponent’s center of gravity. That’ll allow you o easily sweep them, get a leg lock or get into a different guard variation, like the X-Guard, for example. In situations when an opponent retains a strong base and posture, grip fighting is what can get you behind your opponent for a back take. Another option includes going for front headlock attacks, most notably the Guillotine choke. So, the lack of control in the butterfly guard is compensated via positioning yourself under the opponent or utilizing precise grips.

What the grappling world lacked so far is a cohesive system to bring together all aspects of the butterfly guard. the “Butterfly Guard Re-Discovered” Adam Wardzinski DVD does just that. It is the must-have resource for anyone aiming to become proficient from the butterfly guard. Here’s what it offers:

Adam Wardzinski has truly made a masterpiece on the subject fo the butterfly guard. His DVD instructional has it all. OVer 4 content-rich DVDs, he outlines the philosophy of the guard, attacks, counters, tactics, and defenses. it is by far the most comprehensive and easy to follow the butterfly guard system available so far!

It all starts with the basics, but Adam wastes no time on needless talking. He kicks things off with a sweep, getting into the mechanics of the butterfly guard along the way. After all, learning through examples is a great method, isn’t it? I loved the detail on each aspect of completing the very first basic butterfly sweep. Wardzinski goes int detail on body positioning, how to nullify the opponent’s base and finishing with ease. he also offers a few different grip setups as well as a direct transition int a knee slice pass off the sweep.

The second part of the DVD refers to some of the most basic submissions from the butterfly guard. this includes a very interesting inverted armbar setup, your basic Guillotine choke as well as an Omoplata. He rounds it all off with a path towards back control. All butterfly guard classics but with a new modern touch.

If there’s one thing this Adam Wadzinski DVD does not lack, it is sweeping. Actually, the second volume of the instructional is all about sweeps. Well almost all.

A few grip fighting tips preceded the butterfly guard sweep galore. Adam opens up paths to the top via a hook sweep as well as transitions into other guards. There are plenty of sweeps from the Single-leg X Guard close neighbor of the butterfly guard. The cool thing is that these sweeps are all very easy to get and require almost no effort. No wonder Adam labels them as “lazy” sweeps.

To keep things interesting, he throws in a Loop Choke setup at the very end, but that’s not what caught my attention. What I really liked about this volume, is the final chapter. Namely, the dynamics of the butterfly guar change significantly when an opponent raises on leg up. To my great pleasure, Adam focuses on this problem and offers a great solution. Pay attention to this as it is a very useful move.

This is where this Adam Wardzinski DVD goes into overdrive. it’s the Holy Grail of butterfly guard attacks. Adama carries over the Single Leg X dynamics from the previous volume, opening up a great toehold setup to complement all the sweeps. There are, of course, more sweeps, each more attractive than the previous one. From overhead sweeps to the steering wheel sweep, Adam sure offers ways to get your opponent down.

It wouldn’t be a butterfly guard DVD if there weren’t arm drags in it, which is exactly how this volume ends. Some very cool options there.

4. Half Butterfly And The John Wayne Sweep

If there’s one thing out there that nobody has video material on, it is the half-butterfly guard. This is one guard I use on a daily basis and Adam just opened up new horizons for me. For a simple back take all the way to armlocks, this is going to revolutionize your half guard game!

And finally, the one thing that really catches the eye in this Adam Wardzinski DVD – The John Wayne sweep system. The sweep itself is as cool as it gets, let alone the follow-up submissions and even fallback sweep options. It is a simple little system that’s going to do wonders for your butterfly guard game. It has for me!

Finally, a bit on the defensive side, Adam rounds things off with a few half-butterfly guard defenses against common passes.