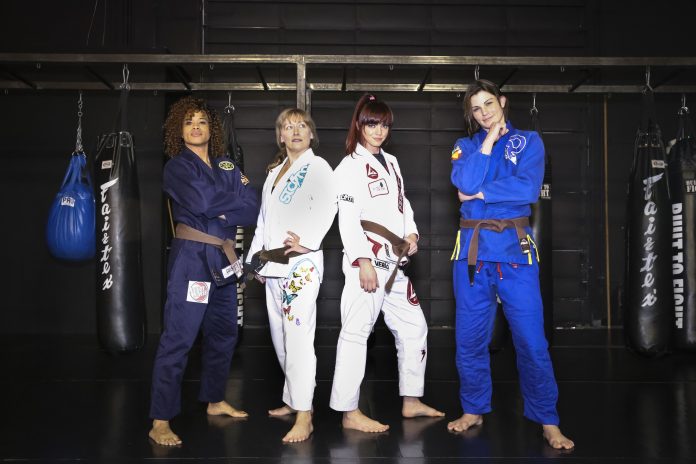 At the academy where I train I have several solid guys, mostly purple belts that are crazy about watching each and every match that comes out. Whether it is professional BJJ or open tournaments, these guys are all over it. However, there’s a really interesting phenomenon with a few of them – they only watch male matches. Whenever we talk about matches and I bring up a high-level female match I’ve seen they have no idea and aren’t interested. According to me that’s a shame because female grappling is on a different level these days. As far as I’m concerned, everyone shunning female grappling is really missing out on chances to learn and progress.

If you ask me, you can learn Jiu-Jitsu from everyone that steps on the mats. I have the perfect example, actually. Over the past couple of weeks, I’ve been doing the “|unthinkable” showing Ashi Garami leg locks to everyone, white belt to brown. Without going into to much detail, one of the girls in the gym that has just over a couple of months of training came up with a heel hook grip modification I’ve never seen before. Neither has anyone else in our academy. Now imagine what she’ll do as a black belt one day. Luckily, the female grappling scene has not just been catching up to the male on lately but ever looking to surpass it. That means that the ladies just getting into BJ Jand grappling now will have a huge platform to further develop, which can only be a good thing for grappling in general.

Female Grappling On the Rise

I’ve already talked about some of the issues that the finer half of Brazilian JIu-Jitsu and grappling martial arts faces. While the opportunities to train were always there, other aspects were not so forthcoming. In those terms, the female grapplers almost always ended up getting underpaid and underrepresented at major tournaments. That’s no way to treat ladies, especially those that can bet you up! Not to mention it goes the picture people try to paint of BЈJ as being progressive, open and beyond cool. Don’t get me wrong, it is, but it neede to work out a few kinks.

Several movements organized by some of the highest level fighters in female grappling quickly managed to improve things. Ana Carolina Vieira and Luanna Alzuguir, two of the world’s top-rated black belts set up a petition for equal pay in women’s Jiu-Jitsu, for example. Another hugely impressive grappling star, Dominyka Obelenyte also had a campaign for equal pay that ended up begin successful, at least when it comes to the IBJJF.

But that’s not all. What I really love, from both an altruistic and a selfish point of view, is the development and rise of the female grappling scene. In particular, I mean the professional female grappling scene. There haven’t only been more invites and opportunities for the ladies, but also dedicated tournaments in all possible formats, from Gi and No-Gi to Combat Jiu-JItsu. What’s great about this is that the ladies get the chance and platforms to pursue their dreams, and we get to watch and learn even more ultra high-level BJJ. All it took was doing the obviously logical thing.

When it comes to women, grappling seems to be a perfect fit for them. They’re more flexible than men, more efficient at movement, and think in ways that are much different than men. All that translates to ultra exciting games that some of the highest level ladies have developed throughout the years. Whetehr this is BJJ, Judo, wrestling, Sambo or any other grappling martial art, an input form both men and women practitioners and competitors is a must in order to really progress and evolve the respective arts further.

In fact, I have the philosophy of always learning from a female grappler whenever I can. Of course, with black belt instructors and competitors, this is easy, as everything they have to say, demonstrate or pull off during rolling is priceless. But the same holds true for ladies with colored belts, who tend to roll with a certain mixture of aggression and grace that’s hard to replicate with male rolling partners. Thre’s no one out here more technical than female grapplers, and if you truly want to understand leverage, frames, and pure technique, they’re the best.

In the current state o things, female grappling is in a rally god spot. It is not just about tournaments and equal pay. Nowadays,  there are plenty of platforms for grappling women to showcase what they know. There are more and more seminars headed by women around the world, and the number of black belts, and conversely, female world champions is also on a steep rise. Moreover, more and more of these women are getting the chance to issue DVD instructionals,  offering yet more opportunities for the rest of the grappling world to learn and evolve. Granted, there’s still a male dominance in the BJJ DVD department, but that’s changing rapidly.

Let’s take a look at some of the events that are taking place around the world, promoting female grappling and providing a much-needed platform for the finer half of the grappling world. For starters, when it comes to professional tournaments, you can take your pick in terms of female-only events. Everyone, from pioneers in the field EBI and Fight2Win to FIVE Grappling, Grappling Pro and many others have female-only events with very reasonable cash prizes.

But that’s not the end-all-be-all of female-only grappling events. While more and more high-level ladies pop up as instructors at huge BJJ camps, there are also women-only camps in terms of both instructors and participants. That is a great step forward for grappling in general, and particularly for all grappling ladies.

A quick look at the state of grappling martial arts around the world clearly demonstrates that females area huge part of grappling and they’re taking it into a new direction. In Connecticut, more girls than ever are getting involved in wrestling. In fact, it is becoming the number one female sport in the state.

Another report coming from Saudi Arabia shows grappling ladies beating local taboos by organizing pro wrestling events in the country fro the very first time. Granted,m the event was a part of the WWE tour, but still, it allowed for two women, dressed in T-shirts and black leggings to grapple in the ring. This is huge for the women of a country that didn’t even allow them to drive until a short while ago.

Female grappling is on the rise, and it can only be a good thing for grappling martial arts in general. Like it or not, women are as much a part of this sport as men and kids are. We have something to offer everyone that enrolls in Jiu-Jitsu, but never forget that everyone that steps on the mats also has tons to teach us, regardless of their belt level or experience.