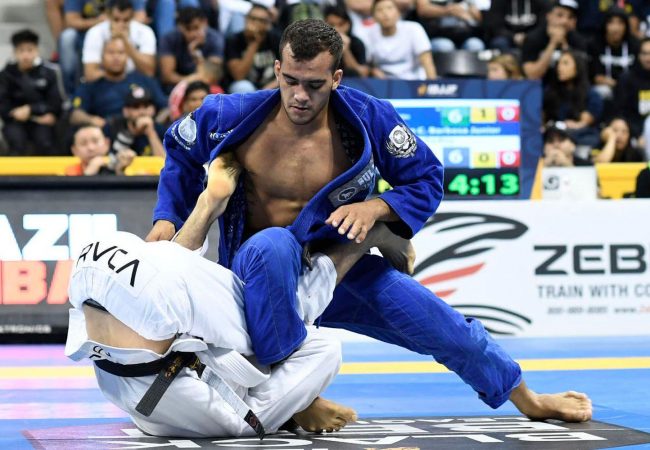 Have you tried to do a Berimbolo? Of course, you have, it is the move to do. Or, at least it was. There’s no denying that Berimbolos are effective. I intentionally say Berimbolos, because there is more than just one version out there. That makes it more fun to play, but also harder to defend. I guess that’s the idea anyway. Regardless, there are certain ways of diffusing the dangers of the Berimbolo that will stop even experts in their midst.

You know what? Defending BJJ moves is extremely easy. Yeah, you read that right. All you need to know is what is happening. Simple right? Well yes and no. To know what is happening, you need to know what the other guy/girl is doing. That means doing a few Berimbolos yourself, even if you do not enjoy doing them. That said, you should also know when to act against a Berimbolo. As usual, the most effective times are defending it really early, or countering it very, very late.

What is the BJJ Berimbolo exactly? It is one of those moves that are exclusive to Brazilian Jiu-Jitsu and looks crazy. In fact, seeing someone do it in a high-level match is always impressive, given the spinning nature of the move. IN essence, Berimbolos are moves that look really complicated because they include a spinning component. However, they’re actually really simple and easy to understand.

The goal of a Berimbolo is to get you from a guard position to the back, without having to sweep and reposition yourself, or having to lift an opponent off their feet. The way to do this is to spin around one of their posts (legs) by doing a Granby roll type of motion. As far as the movement goes, understanding the Granby roll is a prerogative for bot attacking with, and defending from Berimbolos.

The next piece of the puzzle is how to stay connected to your opponent while spinning and inverting on the ground. The basic version has you holding on to the Gi pants from a De la Riva guard. The other arm usually stars with a sleeve grip, but you need to get the belt to ensure your bolo works. Both these grips will help pull you into the bolo both against a seated, kneeling or standing opponent. Once you finish the spin/roll/inversion you end up with one hook in and a clear path to the back. Or the truck, if you like the Dark Arts.

Some new versions of the Berimbolo though, originate from a host of different positions, both top, and bottom. That means that you can’t just learn to counter it from the De la Riva, but rather develop a universal defense system. Let’s talk more about that.

The trick with early defenses against Berimbolos is to prevent the spin. AN opponent won’t make the attempt to do a Berimbolo without grips, so I’m not going to talk about grip braking now. When grips are in, just before the spin hits is when you need to think about early defenses because you can rest assured, the Berimbolo is coming.

One way to really block the BErimbolo is by actually ending up in a near-pass position. Since you already know which leg the opponent will try and get first, you can focus on keeping it safe. AS the opponent gets their grips in, you grab the pants of the free leg. Then, you slide your free leg back, going into a position that’s like the pigeon pose in Yoga. A crossfade from there and you’re safe from any and all Berimbolos. Moreover, you’re almost in an extremely tight pressure pass.

Another interesting way to prevent Berimbolos early is to do something similar, but use it when you’re in a kneeling position. From a kneeling position, you’re in more danger given how low your hips are. However, you have the advantage of getting a collar grip, which is crucial here. The defense can start as the opponent attempts the belt grip. This time around, you stand up and you look to control the leg that’s hooked around yours. the goal is to pull the leg in one direction and pin the collar in another so that you stretch your opponent. This time, though, you end up directly in side control, as freeing your leg is a breeze.

Late defenses are only effective when you leave them to happen very, very late.  This makes them more of counters than defenses, as you most often end up in a dominant position yourself. With Berimbolos, there’s one common theme to all late counters/defenses – you have to roll too. Whether you roll, spin or twist, you’ll end to get moving if you’d o not want to expose your back.

One top option is to end up on top, but in a better position than before. that means one that doesn’t open up Berimbolos for your opponent. One example is the back position. Instead of you giving away your back, you’re going to get back mount of your own.

From a kneeling position when you’re late to prevent the spin, you need to go with it. It takes timing and work, just like every other late escape. The one thing you really need for this counter is controlling the ankle of the free leg That’s the leg at provides momentum and a wedge on top of your hip. Controlling it low during the Granby roll means you can attack it. However, you’ll have to follow the roll by going on your back and kick off the hook leg with your own at a very precise time. Do it, and you’ll end up on the back of your opponent with ease.

The other option also gets you to the back, but in a much more impressive fashion. It requires you to do a complete roll in order to end up back on top. Once again, the key grip is the one on the ankle of the free leg. Simply put, as the opponent rolls to get behind you, you roll with them, over the near side shoulder. Controlling the leg means they can’t get your back. the goal is to roll full circle, like for a breakfall and end up on top in a knee staple or half guard.

Whatever you do, do not fear Berimbolos. They do look mesmerizing when you first fall victim to them. However, they’re very easy to stop, even if you’re late with your initial defense. In fact, going for late counters might even prove more effective than trying to stop a Berimbolo. Don’t forget to keep practicing them yourself, as that’s the best way to identify the weaknesses and timing you need for a successful defense.