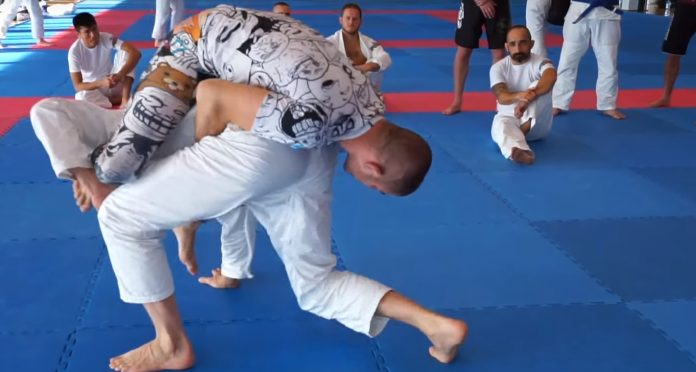 It’s been a couple of weeks since I got back from a BJJ Globetrotters camp. Suffice to say, it was a crazy and unforgettable experience. In fact, a full report about what happened there is already in the making, and it’ll be up shortly. However, before that happens I had to talk about one particular class and one position that is really a game-changer. – the inverted backmount. In short, the position is as nutty as it sounds, and I approached it with a bit of skepticism at first. I thought it’ll take massive amounts of crazy athletic abilities to pull off. It doesn’t. Even a “crippled’ grappler like me can do it and the returns are massive!

The Inverted backmount is a position invented by a black belt from Germany named Alexander Neufang. Suffice to say, he is one legitimate black belt, to begin with. That said, he is also a very clever thinker and likes to go for the unexpected and unorthodox. However, instead of only copying other people, he actually goes and develops stuff of his own. The inverted backmount is something he has used to win black belt matches before. The camp I was at was one of the first times he was showing it, so it was a real treat getting access to ist so early.

An Overview Of The Inverted Backmount 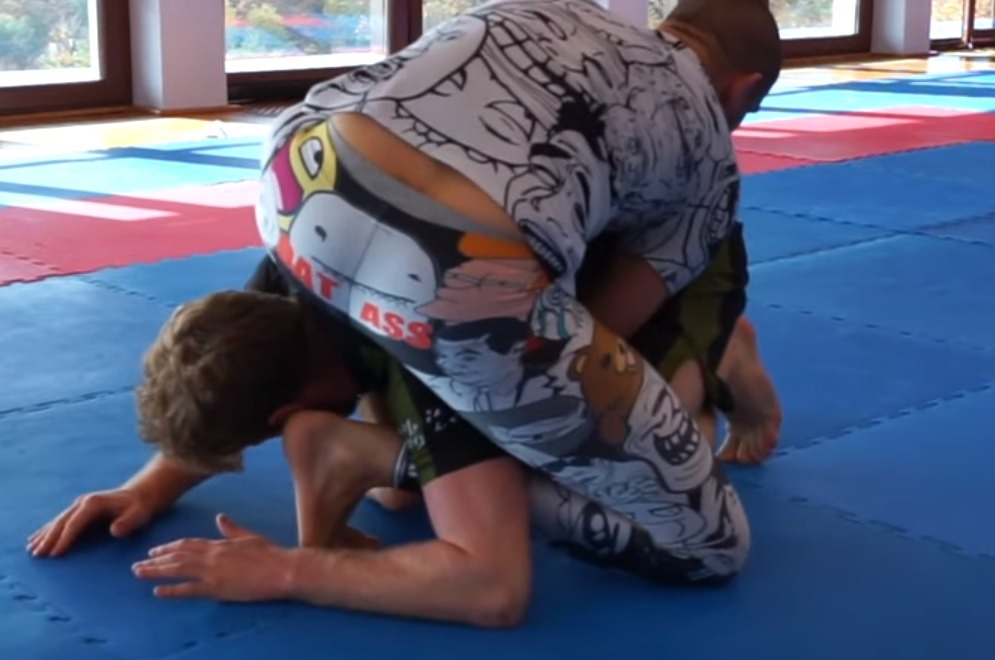 The position looks exactly as it sounds – like you’re upside down on someone’s back. As a first disclaimer, I am not sure if it would score you IBJJF points. In fact, as you’ll see later on, you might want to skip some of the attacks if you’re grappling under IBJJF rules. However, the position works like a charm, and it has everyone in my academy scratching their heads. Once you get there, people simply do not know how to act, or what to do. And that gives you a time to rest and consider your next move without being disturbed.

Another thing I have to mention is that the inverted backmount position is fairly new a concept. I think even Alexander himself only showed a bit of it, but still has more stuff to develop. Still, once you give it a try you’ll see that it offers plenty of options. As a position, it may be the finished product, but in terms of attacks, everything is still wide open. From spinal cranks and crotch rippers to leg locks, inverted triangles and a myriad of wristlocks, there’s no real limit to what you can do. Moreover, you can use it to transition to other positions with ease, while your opponents are still very confused.

How To Get There

Of course, the most important thing about the position is getting there. In that sense, the only thing I knew about it before that class was what Neufang had done in competition. And the footage shows him hanging upside down on another guy’s back before actually taking him down and submitting him. And that was footage from a black belt match. The moment I saw that I thought there’s no way I can pull stunts like that off on a regular basis. Well, that’s an extreme version of it and the position is actually much more “user-friendly”. At least for the guy/girl on top.

To make things easy, getting there doesn’t require that you have the back in the first place. On the contrary, getting it is extremely easy in several situations that occur in BJJ all the time. One example is the double-under pass. Whenever you’re there, and you have trouble passing the legs, simply sit down and you’ve got an uncontested way to the inverted backmount. The position is easy – legs crossed underneath both arms and in front of the chest. Arms with a gable grip at the level of the hips. That’s it!

Next up is the sprawl. Whenever you sprawl as a defense to a takedown, you can use it to get the inverted backmount. The same holds true for a front position against the turtle. All you need to do is sneak at least one leg under an arm, and the hand around the waist. Fall to the side of the leg hook and you’re pretty much there. You can even enter from the clsoed guard, by sitting back and crossing your legs over the opponent’s belt knot. Form there you hug the legs and lie back down to slide into the inverted backmount.

You Have The Inverted Backmount – What’s Next?

As fun as the position looks, ti is attacking from it that really makes it worth it. To attack from the inverted backmount, you want to be facing sideways. Iт provides great control still but also opens up everything, THe best thing si that you can switch from side to side at will. Right there from that spot you have a lot of options to play with leg locks and crotch rippers. Simply open the legs up and choose where you’re going to go. The 4/11 Ashi Garami is just a literal step away. And, if they stick one arm inside the legs, don’t worry – there’s a straight armbar on that arm right away!

The real gem here is a crazy position that’s like the source of all evil in BJJ. Form the “basic” inverted backmount you get control of one arm, and thread your leg over the shoulder, with the foot reaching behind the opponent’s neck. You then move them to the other side and repeat the process. Here’ you got neck cranks, wristlocks, spinal locks, and other evil stuff.

Last but not least, there’s the inverted triangle. When you only have one lag under the armpit for the originally invented backmount, you can think about the inverted triangle. Just pull the free arm across their body (easy given the positioн of your own hands) and the triangle will pop on virtually by itself.

To be completely forthcoming, the class had a lot more things than the ones I wrote about, Moreover, Alexander said it was only the most basic introduction to the position. I guess there’ a lot more to come from this one, and I can attest that it works like a charm. Give it a try, have some fun and surprise people Plus, keep your mind open as there arе many things you can add to the already impressive array of attacks from the inverted backmount!