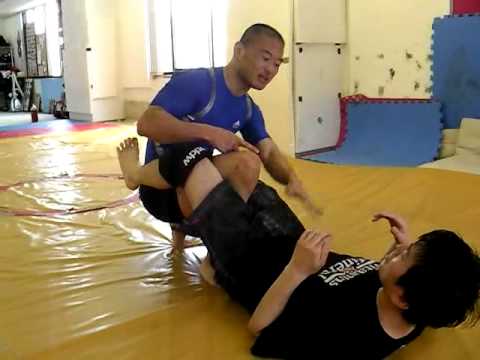 Being stuck in the closed guard sucks! There’s no need to trust me on it if you train Jiu-jitsu you already know that for sure. From day one, the closed guard is a spot that bothers people the most. And, it tends to haunt them for years to come, regardless of belt level. For most, the closed guard is extremely annoying. Yet for some, it is a puzzle they can’t solve. So much so, in fact, that they’d rather give away a sweep and scape mount rather than try and pry it open. Well, that’s pretty one-dimensional thinking. Why not try and think along the lines of “f***k it and go for a leg lock”. Yes, you can actually leg lock people from inside their own guard. And it is not a trick, but rather the science of Jiu-Jitsu.

There are several ways of passing the guard and we’ve covered most of the min earlier articles. For one, you have directions: under the legs, around them, through them, or over them. Next up, you have the stages of passing: secure a base, destroy the guard and pass the legs. Finally, you have the passing styles: loose passing, tight passing, and submission passing. Out of all of them, submission passing has to be the most fun, but the most challenging one to nail down. That’s why you need a bit of the “science of Jiu-Jitsu” to make it work. Particularly when you’re trying to pass the tightest guards of them all – the closed guard.

There are several things that make the closed guard a very difficult place to fight out of. Let’s break it down bit by bit, so that you can see where you can actually sneak in leg locking attacks. The power of the position comes from the bottom person’s legs. When you’re in the closed guard, the opponent hAs control over your hips with a wedge that has their strongest bodyparts involved – the legs. In other words, all they need to do is use their legs, and they’ll be able to take you wherever they want. Let’s go further and look at your upper and lower body inside the closed guard.

The issues with your lower body are in the form of the base. Unless you have the perfect width of your knees, you’re extremely easy to sweep. That said, even with a perfect base, moving is often difficult. That’s because the hips of the bottom person are over yours. If they know-how, they can make their hips and legs really heavy and pin you in place without even moving. Moreover, your upper body is extremely vulnerable when it comes to posture braking. The whole idea of the bottom person is to break your posture. With lower belts, it’s mostly pulling with grips, and that’s pretty easy to get out of, However, with higher belts, it is all about the legs and there’s no way to prevent that. Whichever way you move, your base, posture, or both are in danger.

So, how does the science of Jiu-Jitsu solve this particular puzzle? Easy – use misdirection. The trouble with the closed guard is that most people try to pass it straight away. Yet, you need to open it first. Of course, posture is the key here, but retaining it is not hard if you play your grips correctly. Speaking of grips, why not use the grips that your opponent places on you, to make them pay? In the sense of leg locks, you have two options. You can go for leg locks immediately after you open the closed guard. However, my preferred choice is the second option – opening the guard with leg locks directly.

Opening the Guard With Leg Locks

How do you go about opening the closed guard with leg locks without getting swept? To be honest it is not easy. As a disclaimer, it may not be the most “legal” way of opening the closed guard but it is effective. Plus, you do get a lot of options in terms of what type of leg lock you’re going to hunt for, legal or illegal. Or, you might just use this as your go-to guard opening, followed by some passes or back takes.

Let’s look at the first option. When your posture is broken, the one spot where you can keep your hand,s at least for a second, is the opponent’s biceps. So, when your posture gets broken, go for the biceps. Once you have them, you can pop your butt up and sneak in a knee in the middle. From here we know that sitting back down pops the guard open. However, passing is still some distance away. Leg locks, on the other hand, are easy to hit fright from the spot. The leg you have in between their legs is all you need to enter into an eery tight Ashi Garami. Simply throw your outside leg to the hip and you’re in the straight Ashi. Happy hunting form there.

My personal favorite option requires a bi more science of Jiu-Jitsu. Instead of opening, you’ll look to confuse and use the position against them. Start by getting a hold of one wrist, or the Gi sleeve. Then, its’ time to do the unthinkable – sit down on your butt. Don’t worry you won’t give a sweep away as you’ll e placing a spider hook with your leg on the arm you’re controlling. Now comes the fun part – cross both your legs around your opponent’s waist. In other words, get an inverted closed guard of sorts. From there it’s extremely easy to lie back, pop their legs open and choose and Ashi Garami you like. Just remember to keep a hold of that wrist/sleeve grip until the very last moment.

Before we wrap things up, let’s take a look at the science of Jiu-Jitsu in terms of submission passing. First of all, I do not believe you can pass a guard. Therefore, I don’t’ really like that phrase. A guard is a position of strength for the bottom person so how can we pass it? Instead, you should aim to pass the legs. That means, breaking apart the guard by any means necessary while staying safe in the process. And that is no easy feat to accomplish, especially with the closed guard.

Submission passing is the “shortcut” to solve this issue. With the closed guard, it takes care of opening the guard with the threat of submission. It is the same concept that applies to open guards, where the submission threat breaks apart the guard making the legs easy to pass. With the closed guard, threatening a submission opens the guard, bringing you to the same spot. Another example of passing like this is the Amassa Pao choke-pass vs the closed guard. However, with leg looks, you do not just have a threat, but rather a legitimate submission ready for the taking. Or a pass. Or, anything in between, if you’re’ feeling adventurous.

That’s the science of Jiu-Jitsu in a nutshell – use the positioning of your opponents against them, in order to provoke a reaction you want. With leg locks against ht closed guard, you’re also bringing in the element of surprise. Not many people will expect an outcome like this. Moreover, even if they do, there’s not much they can do when you set everything up correctly. And remember, it is not a sweep even if they get on top for a short while if they end up tapping to whatever you have in waiting in the shadows.

It may have been guard passing that ended up costing leg locks years and years of Jiu-Jitsu progress. However, the tables are now turning, as even the most difficult guards become susceptible to lower limb submissions. The closed guard is no exception and this is just the tip of the iceberg when it comes to new ideas of tapping everyone with ease. Keep your mind open and develop this concept further on your own. We’d love to hear what your experiments have to bring to the science of Jiu-Jitsu when it comes to leg locking guard players.