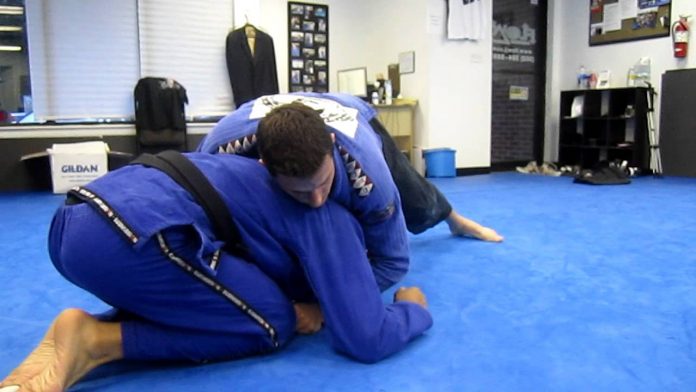 That pesky turtle position yet again. It seems people in all of the grappling martial arts have trouble with it. Judokas can safely stay there until the clock runs out. Wrestlers also turn to it when they need to make sure their backs stay off the mats. In BJJ, beating the turtle is actually not that hard. Granted, the position does present a challenge, particularly if you’re up against someone who can hold it actively. That said, BJJ turtle attacks are ample and you can freely take your pick. All it takes is knowing what to hunt for and the best spot to do it from.

Attack the turtle can be a real nightmare, even against people who do not know a lot. If you’re up against a seasoned turtle master, you might just as well let them stand back up. Or should you? There are several BJJ turtle attacks that work perfectly out there. However, they’re pretty specific so you’ll need to understand a few turtle essentials first. Thos include the angel you’re attacking from, the position’s weak spots (yes they exist) and what to do in both Gi and No-Gi situations.

The exact origins of the turtle position are pretty hard to pinpoint. it is such an instinctive one that it is no wonder just about every grappling martial art uses it in some form. I first encountered it as a Judoka. Even then, it really troubled me a lot. I’m a bit rusty on Judo rules at the moment, but back then, we had a 20 second (or so) time limit to solve it. Not a lot of time to work, which is exactly why the position was so successful. Plus, there are a few tips and tricks to using your limbs to cover all the tiny spaces that Judokas master early on.

In BJJ, the turtle is actually much harder to deal with. That’s because it can very easily morph into an offensive position with very little repositioning. So, it is not just only the power defensive of the turtle position you need to deal with. Now you have to worry that you might end up on the run yourself. Stuff like the turtle guard a real and present danger, not to mention all the surprise attacks.

So, when you’re looking for BJJ turtle attacks, you should make sure they cover all the bases. That means attacking with precision and efficiency, while not being vulnerable to sneaky counter-attacks. To that extent, what helped me the most was understanding where the turtle is most vulnerable itself. That, and a bunch of different BJJ turtle attacks that are widespread all over the opponent’s body.

If there’s any position that actually needs solving in BJJ, after the closed guard, it has to be the turtle. Where do you start? At the front, like from a sprawl position, or from either side or from the back, as is most usual in Jiu-Jitsu? All of these are actually viable attacking spots if you know what you’re doing. And sadly, you can’t just go for the same thing from each one of them. Moreover, you need to understand that BJJ turtle attacks vary between positional and submission attacks.

In terms of solving the turtle as a fortified position. There’s nothing that is more important than angle. The key thing to remember here is that the turtle position is extremely strong in four major directions. Those are directly to the front and back and directly to each side. In fact, the easiest way is to look at it as a clock, with the head positioned at 12. So, 12, 3, 6, and 9 are the strong spots. However, everything that lies diagonally is a direction in which you can easily break it down. The more to the middle between two of these numbers, the better. Like for example halfway between 1 and 2, or 7 and 8. You get the point.

in terms of attacks, if you’re using the clock principle, your first choice is to get position attacks. Most often, you’ll end up getting side control towards the front, or back mount towards the back. Of course, it depends on your initial positioning. And, even if you don’t, you’ll create enough of an opening to launch a variety of submission attacks.

Since we pretty much solved positional BJJ turtle attacks by sharing the clock principle, let’s head into several submissions attacks. As previously discussed, there is a plethora of moves there, ranging between different attacks. Plus there are some exclusively Gi or No-Gi moves to provide options for everyone. Just remember that you always have to use the clock to open up space for whichever attack you choose.

Check out a great instructional that will add a lot to your turtle attacking arsenal. Mike Palladino has the number one DVD one the subject, dubbed “Killer Turtle Attacks” In this two-part edition, he demonstrates everything you know to shut the turtle position down.

This one is a proven thing that’ll catch jsut about anyone by surprise. If you’re a No-Gi grappler though, look away now,. This mover requires your own lapel in order to work. However, it is a perfect solution for everyone that’s stuck in the turtle. The positioning here is on the side. After you move them around a bit you need to look for the opening between the shoulder and the neck. That’s where you’ll be aiming to sneak your far side lapel, which you should have undone previously. The goal is to create a noose around the neck. Easy. To finish the choke you simply pass it to your other are for a while, before you pass it back with an arm now over the opponent’s neck. Pull to choke.

This one is a bit on the complicated side, bit wt will work. Plus, it sort of legal, so you can do it both Gi and No-Gi. This is one to have in your toolbox for when other BJJ turtle attacks fail. One thing people forget to attack against the turtle are the legs. In fact, the feet are actually really exposed.

For this attack, you start from a side position once again. In order for it to work you need to hook the near side leg with your near leg. The goal is to go knee-deep and pull back towards you, so you immobilize the opponent. The same side arm then easily slips under the other leg’s ankle. The goal is to gable grip your arms around their ankle. From there you twist the arms and look away from the opponent for a quick tap and a brutal twisting ankle lock.

Since Judo left us with the turtle position in the first place, ti si only fitting it also provides a solution. Well, it has, thanks to one of the best Judokas out there, Yarden Gerbi. her modified Peruvian Necktie bears her name and is one of the nastiest chokes in grappling. In terms of BJJ turtle attacks, it is a move done from the front. The reason it works better than most front headlock attacks is that it only requires a lapel instead of the arms. For the coke, Gerby passes her own lapel around the head and uses it get an extremely tight Peruvian necktie with the Gi. Completely inescapable and legal.

Of course, we saved the best for last. This is the craziest of all the attacks, but also one that really works. One drawback is that it is much easier to do in NO-Gi than with the Gi. However, given the wealth of Gi specific options above, it’s a perfect fit.

When you’re behind a turtled opponent, and have a seat belt but don’t know what to do, you should think about a rear triangle. To do it, you’ll need to modify the grip a bit, and include one leg under the arm that’s over the shoulder. From there on it is easy – just sit on top of your opponent. Form there, you either look for the triangle directly or better yet, fall to your side and set it up without rushing.

The turtle position doesn’t have to be a nightmare when there are so many BJJ turtle attacks available. Just use the clock principle as your base, and you’ll have no trouble with it. It’ll be a breeze to either get a better position, like side control or the back or a direct and very brutal tap via submissions. Give them a try and let us know what you think.