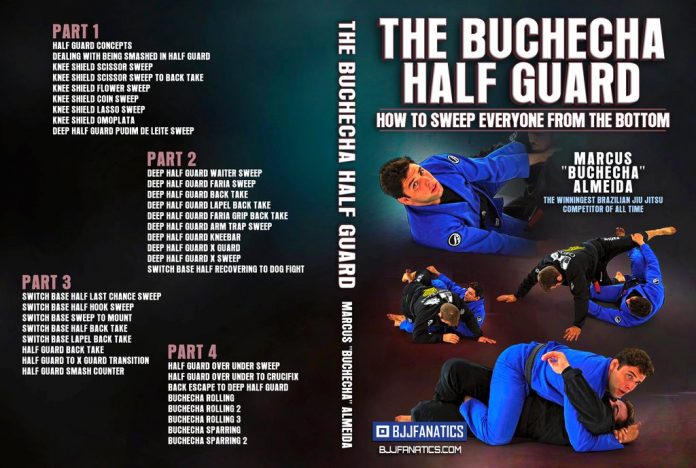 Marcus “Buchecha” Almeida is back ladies and gentleman! He is not just back on the biggest stages of Jiu-Jitsu once again, but also has a brand new DVD instructional out! If you’ve ever seen his previous one, you know that he is capable of extremely high-level coaching on top of his amazing tournament performances. Unsurprisingly, to a certain extent, this brand new Buchecha DVD instructional is once again a half guard master class. To be honest, “The Buchecha Half Guard” instructional is a new take on the old school half guard. And it is just what the doctor ordered! 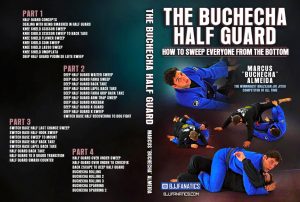 There’s not a person alive that doesn’t like to watch Buchecha compete. He is explosive, he is strong, he is extremely technical and he has some sick fundamentals! Even then, he is entertaining as hell, both in the Gi and No-Gi. We were all stoked to see him square against Gordon Ryan in the Heavyweight Grand Prix, but Ryan’s injury dented our hopes. Still, a Marcus Buchecha DVD is a great consolation prize! “The Buchecha Half Guard” is a four-part instructional that’s long overdue. It is a huge upgrade to his previous instructional and the perfect system for the modern-day Jiu-Jitsu!

The Buchecha Half Guard

Marcus “Buchecha” Almeida is a black belt under Rodrigo Cavaca of the Carlson Gracie lineage. He is one of the greatest heavyweights to ever compete and considered by many to be the greatest of all times. A legendary victory over Roger Gracie earned him this accolade, though it was some time ago. Still, Buchecha has 13 world titles, 7 in his own weight class and 6 as an absolute. On top of it, he is a two-time ADCC champion and also a two-time World No-Gi champion. Not many people can challenge his status in the JIu-JItsu community if any.

Buchecha has an overall extremely well-rounded game. However, it was his half guard that made the difference in many high-level matches. That said, he also likes to hunt for the back and hit toe holds, making the half guard his launching pad for all his attacks. In fact, he issued a Buchecha DVD a few years ago that covered his half guard system. It was simple and straightforward, yet full of details. The Buchecha half guard DVD that just came out though, is leaps and bounds ahead of the stuff he showed in his previous instructional.

This is not unexpected as he had almost a decade to perfect his game. He did encounter some injuries and layoffs along the way, which is probably why he had the time to really dive into his half guard. What you can expect in this Marcus Buchecha DVD is a whole host of new takes on classic positions, including the deep half and knee shield. Moreover, it contains some special features which are never before seen in an instructional with someone of Buchecha’s caliber.

The format of “The Buchecha Half Guard” DVD is pretty much the standard nowadays. It is a four-part DVD instructional that covers a very specific subject in-depth. However, this Buchecha DVD is anything but standard. It is not just the quality of the instructional itself, but also some unique features that are included. The technical aspects of the instructional are pristine, with no glitches whatsoever in camera works, sound or editing.

As mentioned there are four different volumes in this DVD, each containing around 10 chapters. That makes the duration of each DVD at just around the one hour mark. The first volume takes care of the knee shield guard, one of the most common variations nowadays. Of course, Buchechas take on it and the level of instructions is far beyond what anyone else is teaching. Volume two focuses more on another extremely efficient half guard variation – the deep half guard. Once again the information here is unique and provides a different perspective. The third volume covers some Buchecha specials, like switching base and hunting for the back. Finally, the real gem is the fourth and final part of this instructional. In it, apart from covering a few sweeps, BUchecha spends most of the time narrating rolls.

“The Buchecha Half Guard” DVD begins with some general half guard concepts that Marcus likes to use. From chapter two on to the very last chapter, the subjects are only the knee shield half guard. I love the fact that Buchecha stuck to just one half guard variety in each of his volumes. This makes the entire system really simple but very deep and efficient. The first lesson is on how to prevent getting smashed when in half guard, something that’s immensely important.

From there on it is sweeping bonanza form the knee shield half guard. A couple of scissors sweep variations are first, paving the way for more advanced stuff like the coin and flower sweeps. A Lasso sweep completes the sweeping portion, giving the floor toa signature Buchecha knee shield Omoplata. A deep half guard sweep serves as the introduction to the second volume of the DVD.

Part 2 – The Deep Half Guard

The old guy’s favorite guard. Well, not really but you get it. The deep half guard is a position that offers great security while opening up unstoppable attacks. Now, with the information available in this Buchecha DVD, you’ll become an even greater threat from the position. The “basic” and ultra high-percentage waiter sweep is the first that Almeida covers in this volume. From there on he moves to a really great variation of the Faria deep half guard sweep, that all you half guard players will immediately fall in love with.

Apart from a great sweeping position, the deep half is also the perfect spot to attack the back. Since Buchecha loves going for the back, he offers a few different back takes here, one of them featuring some advanced lapel work. A really cool arm trap sweep that precedes a signature kneebar setup from the dep half. A few transitions to the X guard along with subsequent sweeps wrap things up here. Well, almost, as there’s one last chapter that covers a half guard recovery featuring the switch base.

Just like in the previous volume, the last chapter of Part 2 was actually an introduction to the next one. The switch base half guard is something Buchecha has perfected beyond the level of anyone else in Jiu-JItsu! The switch base half guard is the simplest of all the stuff Buchecha demonstrates in his Buchecha Half Gaurd instructional It all starts with some of the highest percentages sweeps you a do from half guard. The best of the bunch is the last chance sweep which is going to become your favorite immediately. Of course, back attacks are also there both with lapels and without them.

The second half of this part of the Buchecha DVD is actually dedicated to transitioning. Back control is always the ultimate reward, but the ere are also transitioning to other guards when the back is not available. The smash counter that wraps this part up is also something that’ll definitely turn out to be very useful.

The first three chapters of this volume offer a few more half guard moves to provide you with variety. These include an over/under the sweep, an over-under to crucifix transition and a back escape that leads directly to the deep half. This wraps up the technical portion of this DVD. what comes next is my favorite part of the entire instructional.

I always love DVDs that end with narrated rolls. Unfortunately, they’re few and far apart. Luckily, Buchecha opted to do this and it is the next level! He has 3 rolls and two sparring sessions included. And yes, there is a huge difference between him rolling and sparring. That said, he uses all the half guard moves that he demonstrated in earlier volumes. The narration also helps put everything together and makes this one of the best half guard DVDs of all times!

Say whatever you want, Buchecha is definitely one of the best of all times. Whether he is the GOAT or not is beyond the point. Nobody has more world titles than him, at least that much is blatantly obvious. His technical knowledge is also off the chart, particularly in the half guard department. The BUvhech Half Guard is one of those instructionals that’s going to be good for the next decade or so, at the very least. Pick this Buchecha DVD up right away and get a huge edge over your training partners and opponents.