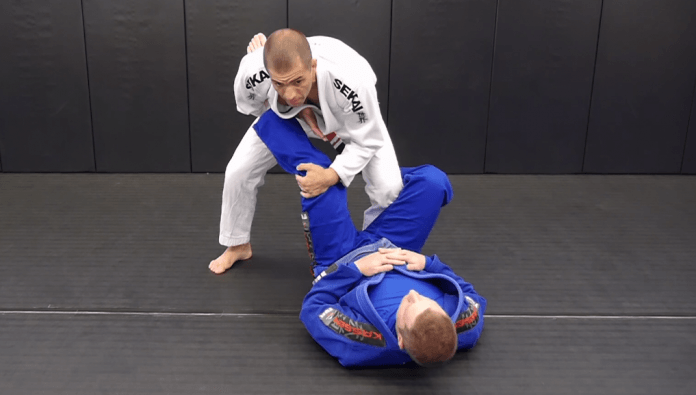 Go for a guard pass or try a leg lock? This seems to be the Shakespearean question grapplers around the world face. The modern game of Jiu-Jitsu certainly offers opportunities. Until a short while ago, the answer was an obvious one – guard passes. Lately, it has been all about leg locks from every imaginable position. This includes jumping to your back from a position that’s prime for guard passing. Apart from a few exceptions people seem to be choosing one route or the other, like they’re exclusive options that do not mix together. And nothing can be further from the truth.

The ability to perform leg lock along with guard passes in combinations is a true mark of not only a high-level grappler but a well-rounded one as well. There are still numerous black belts out there who won’t, for the love of God, even talk on the subject of leg locks. On the opposite end of the spectrum, you have the young hungry guys that would give away their right arm trying to emulate Gordon Ryan. Both these trains of thought are actually opposite of the BJJ philosophy that requires us to be open to experimenting in new directions. It is counter-productive to choose one or the other when you can actually use a leg lock to set up a guard pass and vice versa. Learn how to feed one of the other until you accomplish your goal and leave petty differences aside.

Australian rising grappling star Craig Jones offers his two cents on how to mix leg locks and guard passes for deadly efficiency. Check out the “How To Pass Guards Quickly And Easily Using leg Attacks” DVD set by Craig. It contains all the information you need on connecting these seemingly opposite aspects of Brazilian Jiu-Jitsu.

Getting The Best Of Both Worlds

Let’s go deeper into exploring where and how leg locks and guard passes interact. The original resistance towards going for a leg lock off of guard passes is due to points. Entries from the top were considered to be a move that only gave away free sweeps. In all honesty, this was the case until leg locks turned into a complete system. Now, with the Ashi Garami position as the base for all leg locking attacks, this is no longer the case.

On the contrary, modern leg lockers seem to be doing the same thing they’re so vocal about. Whenever most people interested in leg locks are in a solid guard passing position, they jump straight into leg locks, not looking at the bigger picture. This might have been a good strategy before people learned leg locks. Now, if you give away top position to attack leg locks, and your opponent defends successfully, you’ll end up on the bottom with nothing to show for your efforts.

The strategy to utilize the best of both worlds seems to be an obvious one. However, it takes checking your ego a bit more. Instead of stubbornly hunting foot locks, or just pressuring a pass, look to integrate both approaches. The benefit of doing this is that you’ll be able to get one of the two, thanks to the fact the opponent can’t defend both. It won’t matter how big, strong or experienced your opponent is, attacking with a leg lock – guard pass combo is certain to get you one.

Against freakishly flexible good guard players, leg locks are a great option to submit or divert their attention for a pass.

One great example is the lasso guard. Opponents that play open guards, often revert to the lasso guard to prevent guard passes. Granted, this is a gi-only guard, but it is a very annoying one at that. If you’re up against a De La Riva guard, for example, chances are you’ll end up in a lasso if you press the pass too much. The solution here is easy and perfectly legal – an Estima lock. When your opponent gets in the lasso guard, they place the foot perfectly for this leg lock. All you need to do is place a figure four grip and pin their foot to your belly.

The knee slice pass is also one that has been used so much, that there are countless options for defending it. This means that finishing this pass can be extremely challenging. In order to make the most, all you need to do is ensure that you end up in quarter guard, or just get their knee behind your butt. They might even do it themselves since there’s a defense in that direction. This opens up a backs step option that doesn’t have a pass as its goal. Instead, it’s a gateway into the 4/11 position from where you can wreak havoc on the opponent’s legs.

Last but not least, the half guard. If there’s a position where you can get stuck, it is in someone’s half guard. When passing the guard seems like an impossible thing, you can turn to a toe hold to solve your problem. A rolling toe hold attack on the top leg is a certain way of getting either the lock or subsequent guard passes.

On the other hand, leg locks can easily turn into very potent guard passes if you’re willing to transition. Most Ashi Garami positions offer such control over a leg, that switching to top position land you either directly in a guard pass or very near one.

Let’s start at the 4/11. You’re up against an experienced leg locker that knows how to defend every nook and cranny. In most cases, an opponent defending will cross their feet in a triangle. This will only help you. All you want to do is get the reaping leg out and pull it back with a technical stand up. You’ll end up in combat base deep in a leg drag pass position right away!

The toe hold is another great and legal option you have to pass a guard. Remember that pesky half guard? Well, when you hit the toe hold a few too many times, people will start defending it. The one thing they can do is extend their leg to prevent you from gripping. This action, however, breaks the structure of their half guard. A hip switch and your knee is free of the half guard. Furthermore, you’ll have control over their far side leg, making passing a real breeze.

Finally, you can always decide to actually pass the guard after a backstep 4/11 entry. If you feel your opponent is placing leg lock defenses straight away, like clearing the knee line or triangle their legs, it means they can’t defend guard passes. Simply get your hips down to the other side and keep controlling the near side leg until you pass into side control.

Let’s recap. Guard passes work. Leg lock attacks, as we well know, work too. So, logic would have it that combining two things taht work should provide you with an even better option. Remember, there’s no need to stick to the “old-school” BJJ ways. There’s also no point in only looking at one aspect of modern grappling, like leg locks. Instead, try to combine them all into deadly combos that will ensure you get an end result.

Reverse X-Guard Masterclass On How To Attack Leg Locks

The Carnivore Diet For BJJ – Is It A Bad Idea?