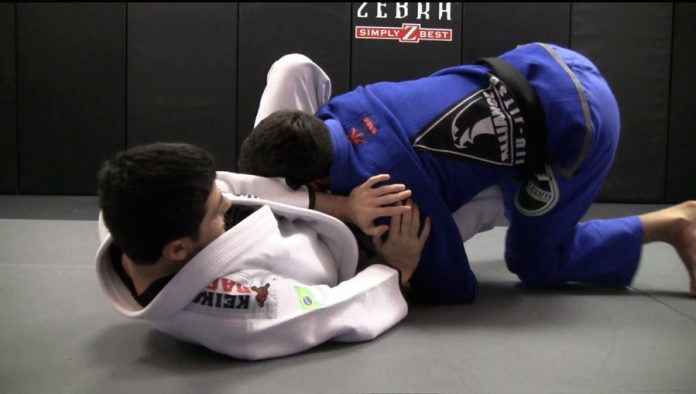 Contents hide
The butterfly guard is one of the most simple, yet effective open guard positions in Jiu-Jitsu. It is a tool that usually beginners and really advanced guys use. While between people seem to shun it because of its simplicity. However, getting stuck on the wrong side of it can quickly turn in to a Herculean task. As simple as it is, the butterfly guard is a notoriously hard one to pass. it’s easy for the bottom person to follow you with ease until they bait you enough to throw or submit you. As such, there is plenty of butterfly guard passes out there, but only few that work. Today, we’re going to categorize them for easier understanding and look at the most effective ones!
Butterfly Guard Dynamics
Pressure Passing
Standing Butterfly Guard Passes

The butterfly guard is one of the most simple, yet effective open guard positions in Jiu-Jitsu. It is a tool that usually beginners and really advanced guys use. While between people seem to shun it because of its simplicity. However, getting stuck on the wrong side of it can quickly turn in to a Herculean task. As simple as it is, the butterfly guard is a notoriously hard one to pass. it’s easy for the bottom person to follow you with ease until they bait you enough to throw or submit you. As such, there is plenty of butterfly guard passes out there, but only few that work. Today, we’re going to categorize them for easier understanding and look at the most effective ones!

Passing the guard can be a really fun thing to do. In the natural progression of Brazilian Jiu-Jitsu, people usually start off from a guard position. This is new, easier to control and more likely to be effective. As people progress through the Gentle Art they tend to discover the pleasure of passing. Especially pressure passing. It works against even the stubbornest of guards, if and when you do it right. However, most of the conventional guard passing methods go straight out the window against a high-level butterfly guard. Butterfly guard passes are an art for mon their own. They need to be precise, quick and properly selected to fit the given circumstances.

Mr. Bernardo Faria is the ultimate source on pressure passing. Not only the butterfly guard but all kinds of guards you can imagine. Check out the “Pressure Passing Encyclopedia” DVD and become an unstoppable force from the top!

The butterfly guard is a fairly simple guard as far as structure goes. it is an open guard variety and falls under the “close distance” guards. However, the butterfly guard is a flexible position that easily adapts to plenty of distances. It works close and far, against a standing or kneeling opponent. The butterfly guard configuration itself is a defensive one. Its main attribute, which is our focus today, is preventing movement and passing sequences.

For a successful butterfly guard game, you need to have your hooks set up right and have upper body control via grips. Just resting your step on an opponent’s thigh is not going to do you any good from the bottom. You need to have your fingers pointing towards your knee and for the knees at about halfway between the mats and their top position. Against a kneeling opponent, both hooks need to go in. Against a standing one, a single hook is enough, with the other foot helping pivot you on the ground.

The butterfly guard does not work without grip, though. there’s no point in hooks without upper body control. Sleeve grips, sleeve and collar grips or two-on-one grips are the most usual ones. There’s also the option of double underhooks. Whatever the choice, the ultimate goal is to get under the hips of an opponent. Once there, sweeping is as easy as choosing a direction. the fact that all directions are open means you can send an opponent lying wherever you want. Even if they attempt to block, you can switch directions, systematically taking away their posting options until the fall. Or you could get into a leg lock, Guillotine choke or arm drag and back control at will.

Butterfly guard passes usually work in two major directions. You could either look to smash the guard’s structure an apply pressure passing, or stan up and go from there. For now, we’ll start with passing from the knees with the help of pressure.

First a few crucial pointers. When you’re looking to pass the butterfly guard from the knees, remember to first and foremost, break all grips on your arms. Next, the goal is to find the balance between pressure and mobility of your hips. Since the goal of the butterfly is to send you flying you need to have the opponent on their back. Next, you need to sit back as heavy as possible. Yet still, you need to be able to switch to floating hip movement the moment your opponent manages to elevate you. Remember that whenever your opponent has their legs too close to their butt, their butterfly guard won’t work.

Once you have no grips, an opponent on their back and heavy hips, proceed to control both biceps of the opponent. Make your head and chest as heavy as possible without lifting your hips. Next, you’ll need to choose a side and use the arm on that side to push down the knee fo the opponent. Keep in mind not to open up too much space while doing so. Once you have a palm on the knee, shift your weight to that side, sprawling your hips laterally. Passing is easy from there.

For the weave pass, look to push one knee from the outside in when you put forward pressure. this is going to land your opponent in a position with both knees pinned. Control the torso to stop them turning and walk your way into side control.

The leg surf passes a great option when an opponent already has you in the air. Switching your hips from left to right is crucial here, as is already going to make it difficult for them to find the precise direction to throw you in. The moment you can, use the hip shift to place all your weight on the end of their leg, forcing them to the ground. You’ll end up in a similar position to the weave pass.

Passing the butterfly guard form your feet is a daunting task. What you absolutely need to remember is that you can’t just stand upright. When butterfly guard passes from the knees don’t work, do not just stand up, or place just one leg up. The basics of trying to push the opponent’ legs to their but still apply here. Actually, the starting position is the same. Brak the grips, get the opponent on their back and control their biceps, putting pressure on them with the head and chest.

When all else fails, you’ll look to pass by raising your hips to increase pressure on the opponent and open up additional space. Remember that raising the hips is dangerous if you’re not controlling their legs. To that extent, you’ll need a grip on one foot whenever you decide to pass standing. Also, be aware that standing passes require some jumping and flipping around.

The hip switch pass is a real gem amongst butterfly guard passes. It works against all kinds of opponents and just requires good timing and control on your side. To execute it, use knee control with one arm, like in the push pass only from the outside in. Put your head on the other side of the opponent’s torso so that your shoulder is on their belly. Now raise your hips, push the kee into the newly created space and jump to headstand. Do not spend time standing on your head though. Once you’re above 90 degrees switch your hips to the side and you’ll end up in Kesa Gatame.

This one is the most acrobatic of the bunch, and probably the most attractive one too. It also lands you directly into North-South which is arguably the best place to be straight off a pass. The set up is the same, their feet in and place pressure. Now use one arm to reach behind their butt and control the foot of the opposite side leg. This’ll have the opponent all tied up. Once you have it, place the head on the side of the torso again and jump straight over. Your goal is to flip all the way over and end up in a bridge-like position. A simple spin and you have North-South.