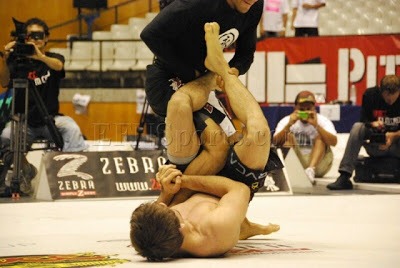 Knee Reaping. Everyone’s heard of it. It is the BJJ boogeyman for competitions, particularly those that are beginners. For a while there, when nobody was much the wiser as to what Ash Garami is, it wasn’t too hard to stay out of knee reaping positions. However, with the whole modern leg locking game and new positions becoming staples of JIu-Jitsu, reaping is back again as a major source of confusion. Regardless of how you roll in training, if you compete under roles that prohibit knee reaps, you need to be aware of what you can and cannot do.

Deconstructing the knee reap position is not hard. There are clear guidelines as to what is considered knee reaping. Anything outside of that is subject to a referee’s decision. That’s the main issue, basically, as people often use the stuff they think is safe, and end up DQ-ed for it. Asking an IBJJF referee is not going to help either, because they still haven’t gotten every possible knee reaping position down either. They’re covered by the rulebook, where it is stated that “the referee’s decision is final”. If you’re a competitor though, you want to use every advantage you have. So, let’s look at the knee reap, what it is, what does not consist of reaping, and how to use everything in your competition game plan.

Contents hide
What Is Knee Reaping?
What Is Not Knee Reaping
What to do with this information
Wrap up

What Is Knee Reaping? 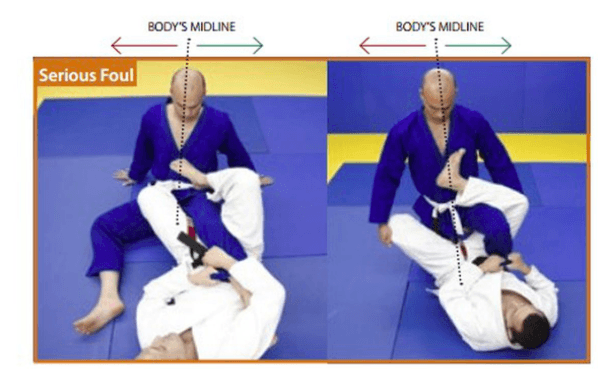 Knee reaping is a position that was made famous by the IBJJF, albeit for the wrong reasons. Before I go on, I have to confess I am not the biggest fan of the IBJJF / UAEJJF ruleset. That said, I’m aware that competing means I have to know it and play by the rules. So it is knowing and understanding the system where most of my focus is. You’d be surprised how many positions you might consider illegal are actually perfectly legal to use. Moreover, you can use them at most belt levels, as long as you understand the rules.

The knee reap is a position where you put pressure on the knee of an opponent in a very dangerous manner. I’m not going to stick to the controversy of things here, but this is exactly why many people think the rule is dumb. There are plenty of other moves, takedowns, and jumping guard in particular that can have much worse consequences on the knee. But enough of that for now. The basic knee reaping position, as the IBJJF defines it, is “when one of the athletes places his thigh behind the leg of his opponent and passes his calf on top of the opponent’s body above the knee, placing his foot beyond the vertical midline of the opponent’s body and applying pressure on his opponent’s knee from the outside.”

Let’ look at it through examples to figure out what not to do in competition. For once, the most basic rule is to never have your toes past the halfway line of your opponent when in the Single-leg X-guard. That’s the most used explanation of a knee reap. For some reason, the toes are important here, and not the entire foot. Go figure. Moreover, certain leg locking positions, like the Sambo Knot is obviously out of the question. Remember, though, that even when you’re defending a leg lock you can get into a knee reaping position. In other words, whenever you throw a leg outside the opponent’s knee and back in above it, you’re knee reaping.

What Is Not Knee Reaping

This is where the fun and confusion begin. What exactly is not knee reaping and how can you set up leg locks, or other attacks by doing what looks like an illegal move? Trust me IBJJF referees have got this down to a science, so you can bet they’re following everything your feet are doing. What most people often confuse in terms of knee reaping is the 50/50 position. Having your legs in a triangle outside the hip does not constitute a knee reap when you’re in the 50/50. The main reason for this is that your leg goes from the inside out, rather than the other way around. 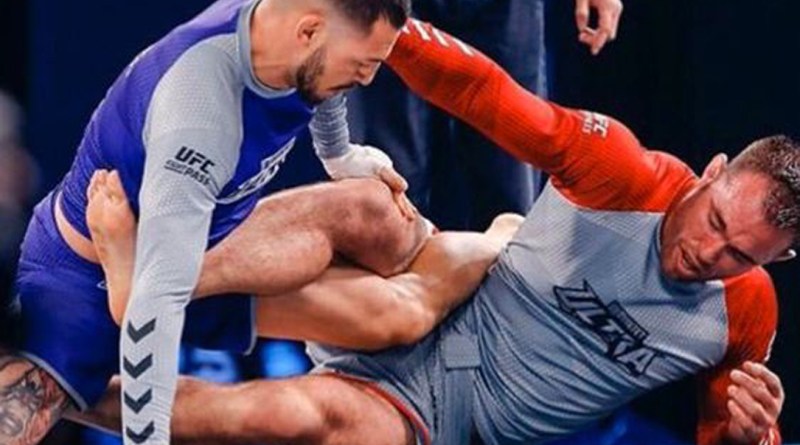 Another key point is the 4/11 aka Honeyhole AKA Inside Snekaku position. Despite having a clear leg triangle above the knee of an opponent, this is not inherently a knee reaping position. You can turn it into one by way of grips, though. The position itself is just an inverted half guard, just done from the bottom. Well, sorts of. In any case, you are free to keep the position, triangled legs or not. What you have to look out for is gripping the same leg you have triangled. If you catch a simple ankle lock like grip, you’re knee reaping. That means you can hold the leg with your legs, but you can’t attack it. However, you’re free to grip and attack the other leg as much as you want.

As far as the single leg X guard goes, just keep your toes away from the centerline. Your heel goes as far as you want without entering a knee reap, at least according to the rules.

What to do with this information

First and foremost, do not fear knee reaping. Neither when you’re doing it, nor when someone’s doing it to you. It is only dangerous in terms of getting you DQ-ed. That said, as long as you know the positions you also have an element of surprise. While an opponent is trying to signal a referee that you’re in an illegal position (which you won’t be if you follow the rules above) you have all the time you want to set your attacks up

The best part about understanding knee reaping is that you can easily use positions others do not understand to your advantage. Of course, spots like the 50/50 guard or the Inside Senkaku leg locks are your go-to moves. However, given that you’re restricted to ankle locks and perhaps toe holds, sweeping and passing are actually perfect options as well. In fact, the 50/50 is one of the top sweeping spots. Plus, the Honey hole can actually get you not just a sweep but a pass to mount as well. All the while, you’ll be safe as long as you follow the rules.

Finally, if you’re feeling particularly mischievous, you might want to consider baiting your opponent into a knee reap if they don’t really know much about it. Of course, you can’t just take their leg and pull it into a knee reap position. This will get you DQ-ed instead. However, you might direct them to a position they do not consider knee reaping and get an easy way out of a fight if that’s your type of thing to do.

The knee aping positions in Jiu-Jitsu are no more dangerous than all other BJJ positions. If you do them incorrectly, you might injure someone. If someone’s bursting out of them in an unruly manner, they’ll also most likely injure themselves. That’s why you need to practice them. First, you’ll know how to use them correctly. Secondly, you’ll know exactly what not to do in competition, rather than having to figure it out as you go. No need to fear the knee reap!