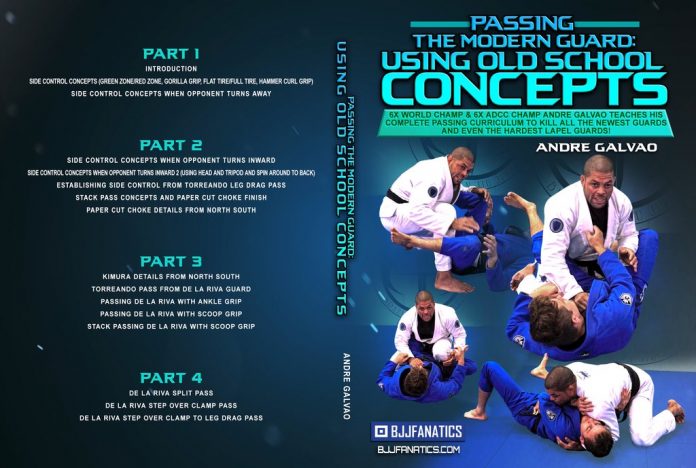 One of the first instructionals I ever had was an Andre Galvao DVD. I still remember the flower sweep details from that old BJJ instructional. In the meantime, apart from the odd YouTube video or tow, there hasn’t been much from Galvao in terms of DVDs. He is busy, leading on of the top competition teams in the world, and competing that he highest levels himself. However, his absence from the digital instructionals scene was baffling to me. Well, he seems to be back now, and with a bang. His brand new instructional, called “Passing Modern Guards Using Old School Concepts” is now out. 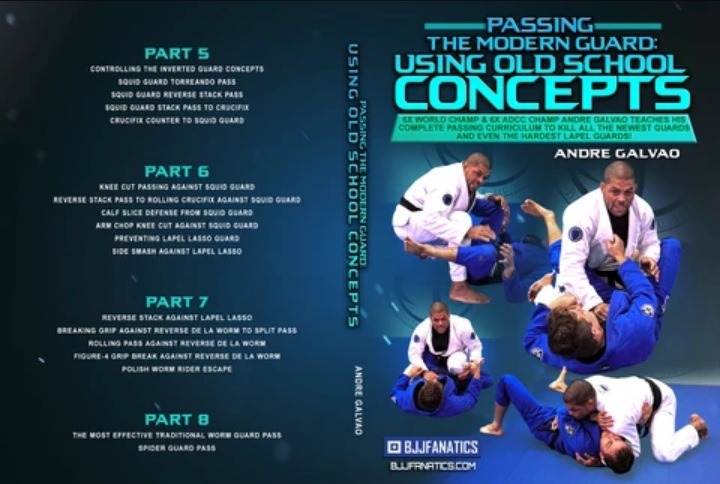 There aren’t many heavyweights in the world that can battle the way Andre Galvao does. Moreover, there aren’t many that can actually show moves that are applicable to lighter people a well. Apart from Cyborg, I’d say that Galvao is the best at doing that in the world. When it comes to the Gi, there’s hardly a better resource for anything BJJ related than an Andre Galvao DVD. Whether it is guard, passing, submissions, takedowns, Galvao has it all down to a science. No wonder his Atos team is one of the most feared teams in Jiu-Jitsu today. And it is not just down to big-name competitors as the Mendes brothers being a part of it. After seeing the Passing Modern Guards DVS I see why even Atos blue belts are such a force to be reckoned with.

When it comes to accomplishments, Galvao has them all. He has all the “usual” top grappler accolades like the IBJJF Worlds (7 titles), Pans (9), UAEJJF Abu Dhabi Pro (3), Europeans (2), and everything else you might think of.  However, it is the ADCC where his accomplishments are more than impressive. Apart from winning both division and absolute in 2007 and his division again in 2009, he is also the ADCC super-fight winner in the last three editions of the sport. In other words, he is the super-fight king in the last 6 years and will be for two more at least. Quite the reign right there.

Galvao is a black belt under Luis Dagmar of the Reyson Gracie lineage. He got his black belt in 2005, making him one of the OGs of BJJ nowadays. He also spent a lot of time training with Terere, before he set out to conquer the BJJ world. Galvao is known for competing literally everywhere, never skipping a tournament, particularly in his early competition years. IN 2008 he co-founded the Atos team with Ramon Lemos. He dabbled a bit in MMA after that but decided to stick with BJJ after his DREAM and Strikeforce outings. Hei s the head coach at Atos headquarters in San Diego nowadays.

Until the next edition of the ADCC, when he is slated to finally meet Gordon Ryan in the super-fight, Galvao is keeping busy with his team. It is great to see that he is thinking about instructionals once again. His Passing Modern guards Using Old School Concepts is one of those titles that I feel is going to become an instant classic. I guess it is enough that it is an Andre Galvao DVD, to begin with.

The Atos team is one of the strongest out there in every sense of the word. Now, a good portion of the best of the best ever in BJJ are affiliated with this team, including the legendary Mendes brothers. The team also included Keenan Cornelius until last year, when a bust-up with Galvao saw the American prodigy leave.

The team is very focused on competition preparation and is notorious for utilizing drills as their best training tool. They became a part fo BJJ history almost immediately, with Gui Mendes becoming the first-ever BJJ world champion. The team’s pedigree is ultra-strong with the 50/50 position, the leg drag pass and back attacks their strongest weapons. However, the guard passing skills of the Atos team members does not end with the leg drag. On the contrary, they have proven over and over again they can pass any guard, Gi or NO-Gi, as has Galvao himself.

After both his and his blue belt student’s Tye Rutotolo impressive ADCC outings, this Andre Galvao DVD lands at a perfect time. Passing Modern Guards is just what we needed given that te Gi competition season is just about to kick off. There’s probably a dig at former team member Keenan Cornelius in there as well, give that he is a huge fan and innovator in the area of modern Gi Guards.

So what do we get with this latest Andre Galvao DVD? I did have quite high expectations going into the review in the first place. Suffice to say I dod not end up disappointed. Quite the contrary. Once more, Andre Galvao demonstrates that he has amazing teaching skills. Moreover, he knows how to teach from a DVD instructional which not all instructors and teachers do. It is the years of experience that make this instructional a special one. In any sense of the word.

The Passing Modern guards Using Old School Concepts instructional follows the modern-day format of a multiple part DVD set. However, as opposed to the usual four-part ones, this is an extended, eight-part set. As with everything that’s modern, it is available in both DVD and digital format. The instructional opens up with a series of side control details, in parts 1 & 2. The next two parts cover the de la Riva guard before all the modern lapel guards get a lot of attention in all the other volumes. All in all, the perfect formula to pass just about any Gi guard of today.

The subjects covered in the first two volumes of the Instructional start with basic side control concepts, and go into dealing with common reactions. Options here include what to do when opponents turn, both outwards and inwards. There are also a couple of finishing options based on the paper cutter choke. A very cool North-South Kimura wraps it all up. All in all, a real side control clinic to kick the “Passing Modern Guards” DVD off.

On the subject of actual guard passing, the De La Riva guard is the first called to attention. The ways past the guars are different, which is exactly what the idea behind this Andre Galvao DVD is. The Torreando pass is first up, followed closely by some interesting innovative concepts. The Ankle and scoop grips seem to be ultra-effective ways to control guards that we’ve been ignoring for years. I have no explanation as to why. Thankfully, “Passing Modern Guards” has opened my eyes to alл the possibilities, not just for De la Riva passing.

Several more options follow, given that two entire volumes focus on the De La Riva. The stack pass against the De La Riva is not something most people expect, so it’s guaranteed to work. Moreover, there are a few clamp passes as well that are just as effective as they’re simple .the winner has to be the split pass, though, along with all the crazy details Galvao shares.

The following three volumes can be seen as the counter to Keenan Cornelius’ Guard encyclopedia” DVD. Andre Galvao’s experience comes into focus here, as he provides option upon the option to counter every modern lapel based guard in JIu-JItsu.

Hе begins with the squid guard, identifying its weaknesses before going into actual passes. The methods are old-school once again, with Тorreando and stack passing the preferred options. Oh, and there’s a pass straight into the crucifix from there, just for good measure. The fun doesn’t end there; though, as the knee cut pass also makes an appearance int his portion of the Andrea Galvao DVD.

Dedicated to really making the modern guard player’s life difficult, Galvao teaches counters to common squid guard submission attacks too. He also shares an entire system to prevent, disrupt, destroy and pass the lapel lasso guards. Speaking of annoying guards the De La Worm gets some attention here, acting as the perfect introduction to the final part of the “Passing Modern Guards” DVD.

Finally, Kennan’s most famous guard, the worm guard gets an entire DVD to itself. In fact, Galvao goes as far as explaining how to pass the worm guard in one giant chapter that makes up most of this final volume. One more squid guard passing option concludes an amazing instructional on the tricky subject of Passing Modern guards in BJJ.

An Andre Galvao DVD is something every grappler should watch at least once in their lives. If you haven’t had the pleasure of watching any of his previous stuff worry not. “Passing Moden Guards Using Old School Concepts” is the perfect one to start with. Just make sure you clear your schedule as you’ll need quite some time to get through it all.