Sweeping people in Jiu-Jitsu is no easy business. Sometimes, it is easy for your opponents’ to figure out when a sweep is coming, meaning it is extremely difficult to get one. And, since from any guard in Jiu-Jitu, all you can do attack-wise is a sweep or submit, it doesn’t really leave you with a lot of options. Still, the same old rule applies that some sweeps work better than others. IN terms of high percentage sweeping positions, nothing can beat the half guard. IN terms of sweeps from the half guard, though, it can be hard to find something that works universally. There is one sweep out there that’s rather unknown that ticks all these boxes. It is called the Giggler sweep.

Funny enough, the Giggler weep is actually really easy to understand. It works for a simple reason – misdirection. When you attack with a sweep from the half guard or any guard, people can easily adjust base and you’re left with nothing. However, if you throw in a misdirection in there, your chances increase exponentially. Whether you go for a sweep or submission as a misdirection, though, there have to be rules, or nothing will work and you’re back to the drawing board.

Doing pretty much anything from the half guard can be a difficult task. The half guard is one of the easiest guards to get to and stay into. However, when it comes to attacking, you might often find yourself in a situation where you have no idea what’s going on. The half guard is pretty much a 50/50 position, with the person on top having a slight advantage due to gravity. It is this advantage that you want to take away by manipulating their base. That’s when gravity starts working for you, and you get a sweep.

The main issue with half guard sweeps is that the base of the opponent is wide, and it is very adjustable because one leg is completely free. That means you’ll really need to work hard to get the opponent’s base narrow and end up on top. Or you can work smart, and deceive them into doing things for you. A great way to achieve that is to threaten them with something. In the situation of the giggler sweep, you’re actually threatening with a submission and a sweep in order to get a completely different sweep to work.

Although this might sound like a lot of work, essentially it is all very simple. All the attacks you’re doing, are in a direction you need to head to in order to use the Giggler sweep up anyway. And that is the big secret of success with BJJ sweeps. You need to set up attacks that are along the “route” of your main sweep, rather than try and do unrelated stuff and reset along the way. If you really want sweeps to work for you, you have to mask them with other stuff, and the Giggler sweep is the perfect example of how.

The Giggler sweep has a distinct advantage over most of the half guard sweeps – it works in both gi and No-gi. Moreover, it does not require you to “sacrifice” an underhook. Yeah, despite many people thinking underhooks are the ultimate goal of the half guard. They’re not. As a D’arc choke specialist, I can’t wait for people to go for an underhook from the bottom half and let me choke them. Despite the underhook being quite successful for many, it is not the silver bullet of half guard sweeps. What you want, is actually to control one of the limbs of the opponent.

However, you want to have complete control over it, in order to really disrupt the base. The electric chair sweep from lockdown is a great example of controlling the free leg in order to sweep .the Giggler sweep, on the other hand, is all about controlling one of the opponent’s arms.

The whole trick with this sweep is getting a Russian two on one on the far side arm. The basic notion here is that you want to have the far arm of your opponent at the centerline of your body, or near the floor. With the Gi, getting the Giggler is actually very easy. All you need to do is control the sleeve you’re the arm in question. The direction you want to push it in is towards the opponent’s crotch. They won’t think much of it as you do it, and might even end up in crossface. That’s perfectly okay, as they won’t be able to put any pressure on you. All you need to do is roll to the side away from your opponent and they’ll follow tumbling down.

The misdirection here is in allowing your opponent to get the crossface. Most people think that once they get there, they have you pinned. It would be true, if not for the key sleeve grip on their other arm. The grip lures them in toa sense of false security and you can sweep at will. In fact, sweeping them from a crossface is much easier than sweeping them with their posture intact.

In No-Gi, the Giggler sweep gets really interesting. This is my preferred version, provided that it works in both Gi and No-Gi. That way, you actually get two Giggler sweep options in Gi. This is where you’re actually going for a Russian two on one. In this instance, you need control over the upper arm of the opponent, rather than just the wrist. However, you can sweep a postured up opponent this way, meaning you open up different opportunities.

The misdirection here is twofold. First, you grip the nearside arm like you’re going for a Kimura, this opens up an underhook position from where you can go for the usual half guard stuff. However, smart opponents will look to actually get an underhook on you. And that’s exactly what you’re waiting for. The moment they pummel their arm in, you switch your grip from the wrist on one arm, to the wrist of the other. The pummel action in itself will provide you with the elbow grip.

Sweeping from there is as easy as lying on your back and rolling yo9ur opponent over to the side. Plus, you end up on top in a very good position, with the arm still trapped.

Sweeps are really fun and really challenging to pull off on experienced grapplers. If you want to control and sweep an experienced grappler, or someone with a crazy wrestling background, then half guard is your best bet. Moreover, from the half guard, nothing is going to ensure your success as much as the giggler sweep. Just make sure you’re not too obvious about what you’re doing and you’ll hit it every time you try. 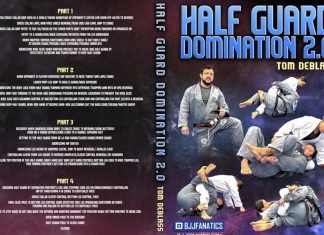 BJJ World - May 31, 2020 0
Tom DeBlass has been one of the most active coaches on social media, particularly during the COVID-19 pandemic. He is doing everything to still...