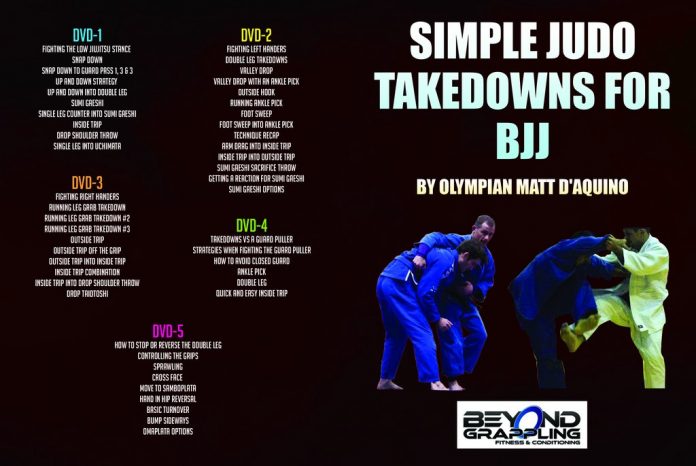 Judo for BJJ? If you’re a grappler that prefers training and, more importantly,  competing in the Gi, than definitely! there’s no better way of getting a Gi fight to the ground than using Judo. The problem here is that Judo is a complete, and quite complicated, grappling martial art in itself. If only someone could make a selection of the Judo stuff that really works for BJJ and put it together. Or, even better, make a selection and then simplify things as much as possible. Well, this wish is now a reality, thanks to a certain Matt D’Aquino DVD Instructional named ‘Simple Judo takedowns For BJJ’.

In all honesty, I’m really interested in wrestling based takedowns at the moment. However, I do have an extensive Judo background and very often fall back to my go-to moves. Still, the way they’re taught in Judo and the way they’re required to work in BJJ can be quite different under certain circumstances. Matt D’aquino is a Judo Olympian who also just so happens to be highly proficient in BJJ. This means that he doesn’t only teach Judo in its original form, but also has modifications that fit BJJ. This Matt D’Aquino DVD Instructional not only modifies the best Judo moves for Jiu-Jitsu but also takes away all the confusion out of them. As such, it is arguably, the best Judo for BJJ DVD instructional of all times.

There’s no point in going over all of Matt’s Judo accomplishments at a global level. It is enough to know that the Australian is a high-level Judo Olympian and multiple times world champ. On top of it all, he is also a BJJ brown belt under Felipe Grez, a Michelle Nicolini black belt.

Something that makes Matt particularly great as a takedowns coach is his size. If you expected a giant super heavyweight, then’ you’ll be very surprised. Matt is an extra-lightweight according to Judo weight classes. That means that he has less than 140 lbs when he steps on the mats. However, he is also a 4th-degree Judo black belt, meaning that his technique is as high-level as it can get. A lifetime in the art of Judo, though, means Matt can dumb it down for us and filter out all the stuff that’s not really applicable to Jiu-Jitsu.

This Matt D’Aquino DVD Instructional manages to do just that. Matt focuses primarily on the Judo moves that are the highest percentage. He then makes them as simple as humanly possible, before looking into various ways they can be adjusted for BJJ. If you enjoy Judo style attacks, you’ll enjoy every bit of this DVD. If, on the other hand, you’re a fan of wrestling style takedown, this DVD is a nice way of introducing a little variety to your game. A win-win situation in any case!

So far, this instructional is by far the biggest one on the subject of BJJ specific Judo. It has a total of five discs, each addressing a different chapter of Judo. First up, as expected are the basics, along with some fundamental counters. Next, come key grip strategies and the essential trips and foot sweeps. Leg takedowns are the theme of the midway DVD, opening up the door to Judo combinations for the first time in this instructional. The penultimate chapter is all about dealing with guard puller and beating them to the punch, or rather, takedown. In the final chapter, Matt covers various ways in which you can use Judo to get the better of a wrestler, along with some innovative and never before seen techniques.

Production wise, the DVD is flawless. In terms of content quality, there’s nothing but crucial information in each chapter. While there is a progression, you could also start with the fourth DVD and still obtain incredible results. This is down to the way this Matt D’Aquino DVD Instructional is organized. Namely, each chapter contains information on a  certain subject area which connects, but doesn’t require the information from all the other parts. Genius!

Let’s take a better look at each of the chapters that make up the “Simple Judo Takedowns For BJJ” Matt D’Aquino DVD Instructional. First and foremost, instead of covering Judo basics, Matt goes into the ins and outs of the Jiu-Jitsu stance. BJJ people tend to start way lowers the other grapplers, and Matt has the cure to countering this opening gambit.

What I consider to be Judo’s most powerful secret weapon, the snap-down is covered next. Mat not only shows you how to “ragdoll” your opponent’ but also how to pass the guard while you’re at it. Some cool counters wrap things up, with the Sumi Gaeshi counter to the single leg being my clear favorite. The Single leg to Uchi Mata is also one to look out for.

Part two begins with something that’s unique to this instructional. Here, Matt addresses how to approach people that are primarily left-handed. Unusual for a Judo DVD, he covers double leg takedowns here, before moving on to some cool judo stuff, like the Valley Drop. In fact, the sues the Valley Drop to open up further classics like some highly effective ankle picks.

Foot sweeps are not far behind, and Matt managed to really reduce the Ashi Waza part of Judo to just a few high percentage moves. Moreover, they’re all easy to learn and have rather simple mechanics. After the initial foot sweeps basics, D’Aquino goes into the inside and outside trip, using the armdrag as the perfect setup. Some further Sumi Gaeshi options, this time offensive, wrap the second chapter up.

Midway through the Matt D’Aquino DVD Instructional, we get to learn how to deal with right-handed opponents. This is where Matt’s unique approach shines. Left-handed opponent? Use the stuff from Chapter 2. Right-handed opponent? Switch strategies by going for leg grabs instead. Leg grabs are not a part of sports Judo due to rules, but they’re open for BJJ grapplers. Matt offers a bunch of variations on them before he gets back to foot sweeps.

Once again, trips feature here, although this time with slightly different setups. Remember, these are all about dealing with a right-handed opponent. Outside trips are the initial ones here, and can then transform into inside ones if the opponent reacts. There are a  few coo combinations here that all but guarantee you a takedown. The drop Tai Otoshi, a very attractive trip/throw is at the tail end of this part.

I really enjoyed this part, probably more than any other in this instructional. In terms of content, this one is the shortest but covers a lot of very important aspects of Judo for BJJ. Dealing with guard puller is just as important, if not more, than countering the low BJJ stance. Matt’s strategies are very to the point and without unnecessary complications. He even accepts that a guard puller might be quicker than you. That doesn’t mean, though, that you should allow them to get you into their closed guard. Matt offers the best sneaky trick I’ve ever seen to make sure you stay away from a guard pullers full guard.

Deep studies of the ankle pick and double leg takedown follow, where Matt covers basics, variations, and BJJ specific setups. Yet another inside trip variation, this time a quick one, brings this chapter to a close.

The final piece of the Matt D’Aquino DVD Instructional is going to help people that have no wrestling background more than anyone else. After covering left and right-handed opponents, guard pullers and the low BJJ stance, all that’s left is dealing with the guy who has wrestled all his life.

As you might suspect, it all starts with grip fighting. The one thing about wrestlers that you can bet on is their explosiveness. So, Matt brings you an updated sprawl version that’ll have you stuffing all takedown attempts. There’s also some key innovative stuff here, starting with crossface pressure details and ending up with the Samboplata and Omoplata.

So, will Olympic Judo really help your Brazilian Jiu-Jitsu? Of course, it will, under the condition that you learn a condensed and precise version of it. Actually, you do not need to learn Judo as a whole, but rather certain aspects of it in a specific context. What you need is to understand what you want to achieve with every Judo move you like to add to your arsenal. Next, you’ll want to make sure you really master each and every one of those moves.

The bottom line is that you do not need to train like an Olympic level Judo athlete in order to use high-level Judo for BJJ. All you need is to pick up the “Simple Judo Takedowns For BJJ” Matt D’Aquino DVD Instructional. You’ll get a condensed and easy to follow program that is going to take your Judo to Olympic level standards in a fraction of the time. Sure, you won’t be able to fend off lifelong Judokas, but to BJJ opponents you’ll certainly look and feel like an Olympic level Judo player.

If it hasn’t become painfully clear by now, I am fascinated by Matt’s instructional. As such, I can’t recommend it highly enough to anyone involved in grappling. If you train Brazilian Jiu-Jitsu, particularly Gi BJJ, then this is the one title you absolutely have to own when it comes to the standup department. It is the ultimate Judo shortcut to an effective, al round standing game that’ll make you a handful for anyone!