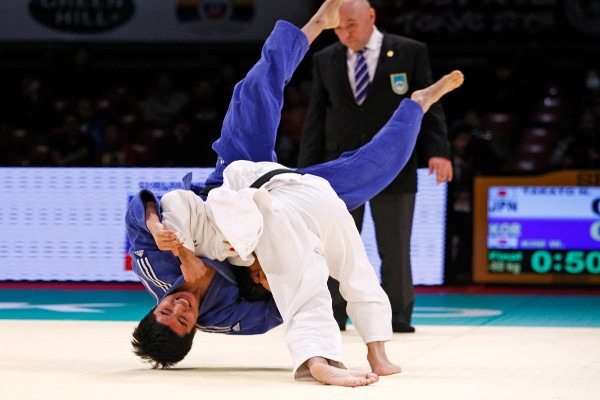 Throwing people to the ground is fun! In fact, for me, it is much more fun than taking them down to their butt. Do not get me wrong, I’ve got nothing against takedowns and do use them regularly. But throws are much more devastating, seeing as flying through the air before you end up crashing on the ground takes some time to recover from. And, as same as that window might be, it is long enough to go for a finishing move. There are two issues with BJJ throws though. The first is that there aren’t any generic ones. So, we borrow from Judo. The second issue is that some Judo throws might land you in trouble instead of the other way around. A great example is the Ippon Seio Nage.

Judo techniques are a near perfect match for Brazilian Jiu-Jitsu. The fact that they include Gi manipulation in their essence makes them very applicable in BJJ. However, rulesets can really affect how effective a throw can be between the two grappling martial arts. A throw that might be really high-percentage in Judo might not work at all in a Jiu-Jitsu setting. This is not inherently a bad thing. Such a situation leads to innovation and modifications, deepening the pool of techniques for both arts. This means BJJ throws are in essence similar to Judo throws, but modified in some crucial aspects. The Ippon Seio Nage, for example, is pretty dangerous to go for in BJJ. But the Drop Seio Nage is a completely different story.

The Drop Seio Nage is not a throw that comes naturally to people in Jiu-Jitsu. After som any hours of instruction on never turning your back to your opponent, it is not surprising. However, every rule has an exception. And, the Drop Seoi Nage is as exceptional as it gets.

If you look at high-level BJJ competitions across the world, you’ll see the Drop Seoi Nage feature, yet not nearly as much as it could. Actually, apart from a few proficient Judo players with lower belts, it is almost exclusively a throw used in the advanced divisions. this means that brown and black belts use it as part of their BJJ throws much more than others. While the throw itself does require good technical skills and very precise timing, it is not an advanced technique per say. In fact, it can work at all belt levels and for every type of grappler.

The Drop Seoi Nage is one of the most reliable BJJ throws if you can master its mechanics. It lands you in a great top position to easily dominate a match. In many instances, it’ll open up submission option straight away. It is an explosive and violent throw that leaves opponents confused and dazzled. For Brazilian Jiu-Jitsu, this throw is exactly what the doctor prescribed. The only “drawback” is that you’ll need to drill it, constantly and with as many different partners as possible.

The basic Judo version of the throw is actually the Ippon Seoi Nage. For Judo, this throw is somewhat of a basic. It is akin to the armbar in Jiu-Jitsu – you learn it early and you can use it all the way to black belt. That said, the move is not one that comes naturally to people, hence the need to drill it so much.

Executing the Ippon Seoi Nage starts in the basic Judo grip position. It is pretty much the same as the starting BJJ position – collar and elbow grips on the Gi. From there, the goal is to create a Kuzushi (off balancing) by pulling the opponent forward and opening their elbow. At the same time as you pull their weight forward, you’ll be looking to enter fro the throw. Entering requires you to place a foot in between their feet so that you can pivot. The goal is to get both your feet parallel and in between the opponent’s feet. At the same time, the arm that ‘s on the collar let’s go and goes under the other arm’s triceps, like a hook. As your hips go below the opponent’s you’ll be able to use the momentum to throw them over the shoulder of the arm that you’re using a hook.

The one glaring issue that prevents the Ippon Seoi Nage of being a part of the most successful BJJ throws is arm placement. Whenever you place an opponent’s arm over your shoulder, you’re opening up back attacks. Even if you do not get choked, your opponent can take your back and start from a dominant position. Skillful and experienced grapplers can take the back even as they’re being thrown via an Ippon Seoi Nage.

The one key modification is probably obvious to you now. It is, of course, the placement of the arm. However, as with all other BJJ techniques, why stop there? Why not increase the power of the throw even further, by introducing a level change.

Keeping the Kuzushi and entry principle the same, another modification for BJJ is the “drop” part. Once you pivot on your leg and manage to create an opening. Instead of turning your back and just bending your knees, you drop to your knees completely. This is going to destroy the opponent’s posture regardless of their strength. However, it also carries a moment of danger. If you stay on your knees too long, your opponent can get top position, despite your grips. The trick with the Drop Seoi Nage is to get up on your knee the moment your butt touches your heels. It is a spring effect that’s going to send your opponent crashing while keeping you safe.

If there’s one example of a nasty Drop Seoi Nage that works in high-level BJJ, it is that of Erberth Santos. The Brazilian throws heavyweights around like they’re pillows, planting them on their faces. His Drop Seoi Nage is a brutal version of the regular and has much to do with Santos’ explosiveness.

The strategy Santos employs is a truly brutal one. He explodes right into the Drop Seoi Nage, however, does so at a different angle than most. This results in his opponent’s hitting the ground head first. The logical response is to stay on the ground accepting the takedown. The alternative is to get back on the feet and end up on your head repeatedly. Not something you’d like to experience, but definitely something you want to add to your BJJ throws.

Travis Stevens is an Olympic Judo Silver Medalist and a BJJ black belt. If there’s anyone that knows how to adapt Judo to BJJ it is him. In his “Takedown Blueprint” DVD set, Travis goes over all kinds of Judo throws for BJJ, along with the help of his friend and mentor, Judo standout Jimmy Pedro. Pick this video instructional up and start enjoying immediate success on the feet!

Judo For BJJ – The Essentials Of The Uchi Mata Throw

Throws And Takedowns For BJJ That Really Work

Some Judo throws for BJJ