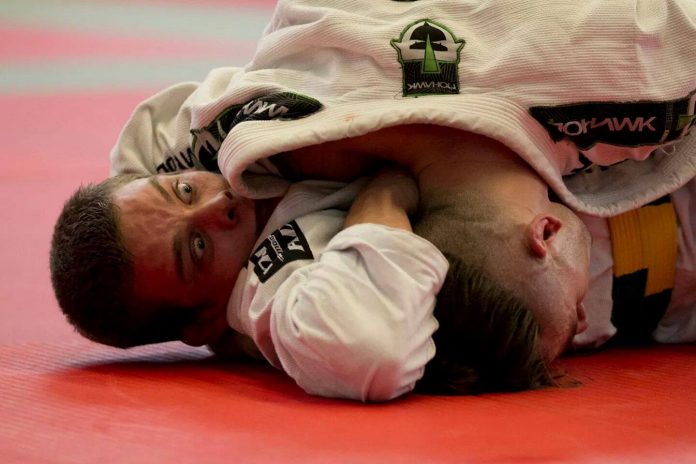 Even when we wrestled as kids, knowing absolutely nothing about grappling, we always have the tendency to be on top. The human instinct dictates that the top position is far more preferable than the bottom. Most grappling martial arts, like wrestling or Judo, are also based on this concept.

When you take someone down, the winning points come from holding them while on top. In that sense, BJJ is not very different. Despite having the option of fighting off your back, unlike other martial arts, Jiu-Jitsu still emphasizes the top position. One look at the point system of Brazilian Jiu-Jitsu and it is clear that everything leads to the top position. There’s a great reason behind this, other than our primal instinct. That reason is that from a top position new can exert pressure that can debilitate an opponent. And from the many kinds of pressure, none is more devastating than the BJJ Crossface.

The Crossface in Jiu-Jitsu is one of the fundamental concepts of top position pressure. It allows a grappler to pin the opponent by controlling their head. In Brazilian Jiu-Jitsu, the Crossface is the primary mechanism behind the success of plenty of top positions. Side control, full mount, top half guard, and plenty of other positions rely heavily on the BJJ Crossface. Knowing how to control the head of an opponent with extreme pressure is an extremely important aspect of passing any guard in Jiu-Jitsu. In certain instances, the BJJ Crossface might even elicit a tap out of an unrespecting opponent. In that sense, it is only a few details away from a very powerful choke that’ll put people to sleep in no time.

The Crushing Pressure Of The BJJ CrossFace

The BJJ Crossface position is one of the fundamental characteristics of the pressure game from the top position in grappling.  The most prevalent use is when you’re holding down someone in side control. However, this is no the full extent of this powerful pressure move.

The mechanics of the Crossface are based on pressure and head control, two major Jiu-Jitsu principles. A properly structured Jiu Jitsu Crossface starts by placing your hand under your opponent’s neck, going as deep as you can. For the purpose of explaining it, let’s say you’re in top side control. From there, the goal is to turn your opponent’s head away from you. In order to do this, and keep the head there without overcommitting you’ll have to use proper weight distribution and pressure placement. What this means is putting your shoulder down on their jaw at a specific angle that elicits maximal pressure.

In terms of keeping a safe position while going for a BJJ Cross face, remember that pushing forward with the shoulder is likely going to help your opponent reverse the situation. So when you have the arm deep and shoulder in place, pull the opponent inside towards you instead of only projecting your weight forward. This is when you feel the true power of the Cross face.

Controlling the head means that you easily control the body. The body’s movement is severely limited when the spine is not aligned. it is \, put simply, a way to break your opponent’s posture. , As you should know by now, controlling posture very often means you control where an opponent can go. A solid BJJ Crossface is a crucial piece in applying pressure on your opponent from the top.

Crossface Torture From The Top

The Crossface is also one of the staples of mount control.  The mount is a tricky position to control in the first place, with complex mechanics.  Usually, beginners are not able to maintain it for long due to incorrect weight distribution and balance. What happens is they get rolled back to guard, or pushed back into half guard. One of the key components to maintaining mount is having a brutally painful Crossface pressure.

Just like in side control, the focus is on head and neck control.  The BJJ Crossface completely neutralizes one of your opponent’s sides, making escapes impossible. From a solid chest to chest pressure, you need to go under their neck and turn their head in one direction, just like in side control. Once again the goal is a misalignment of the spine.  From the mount, you could also use the Crossface to set up submissions. Namely, it can be used to distract your opponent while you work on a submission.

Have you ever heard of the Von Flue choke? This choke is the perfect guillotine counter. At least that’s how it came to be.  Lately, UFC vet Ovince St.Preux has become hugely popular due to using it in MMA fights. Whenever someone stubbornly holds onto a guillotine choke even when you have passed their guard, it’s time to teach them an unforgettable lesson. The Von Flue choke It’s a highly effective and unorthodox technique. Even better, it doesn’t have to be set up from a guillotine defense. Instead, you could go for it straight off a Crossface.

The mechanism of the choke is similar to a triangle choke. On one side, you force the shoulder of the opponent’s far arm to block the arteries on one side. This is done by forcing the opponent to angle towards the ground. This puts their shoulder straight up against the side of their neck. To complete the choke, you need to drive your shoulder into the top side of their neck. From a strong Crossface, the shoulder is already there. All it takes is some pressure and you get the tap.

The Von Flue choke is a really fast one so be advised that your opponent might go to sleep before they get the option to tap. As such be careful both in training and competition and especially while rolling. In competition, there is a referee to monitor the situation. In rolling, you need to be careful not to hurt someone with the power of your Crossface!