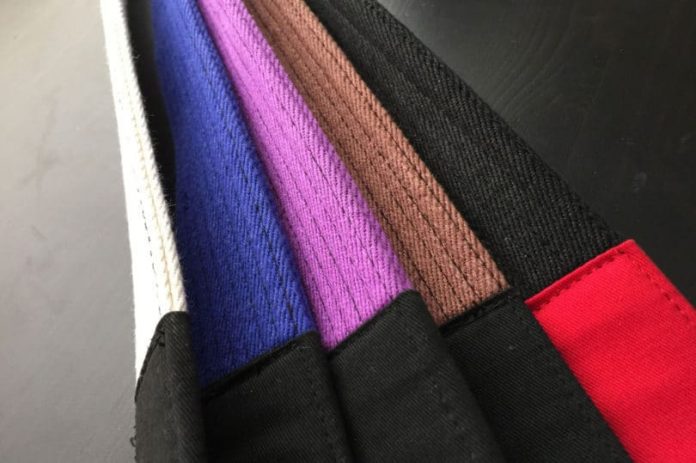 Do you know the story of the Jiu-Jitsu Belt Order? Why is Brazilian Jiu-Jitsu so different from other martial arts when it comes to the color and order of the belts? Some of these questions were quite difficult to answer until a short while ago. Even now, the correct information can often be hard to find, in the midst of all the myths and stories in regard to Brazilian Jiu-Jitsu belts. The belts in BJJ are definitely unique, from the way they look to the way students earn them. It is time to tell the true story behind BJJ belts and their origin.
There are plenty of stories and mysteries surrounding how belts came into martial arts in the first place. There are just as many when it comes to Brazilian Jiu-Jitsu belt ranking as well. Most people have probably heard the old story that martial artists whore nothing but white belts. Throughout the years, they would become so worn out and dirty, that they appeared black. This story, however, has never been corroborated or confirmed, so it remains just a story. In terms of the Jiu-Jitsu belt order and origin, there are plenty of stories, based mostly on what people think happened. The real story, though, is much simpler and makes a lot of sense. Moreover, it has been confirmed by plenty of sources.
Contents hide
Where Does The Jiu-Jitsu Belt Order Come From?
What Does Every Belt Level represent Today?
BJJ Belt Promotions
Wrapping Up

Where Does The Jiu-Jitsu Belt Order Come From?

Let’s try and clear up all the confusion. Dr. JIgoro Kano, the founder of Judo is the “man to blame” for the belt system. When transitioning old Japanese Jiu-Jitsu into a sports format, he decided he needed a way to distinguish between beginners and advanced students. Hence, the white and black belt. The idea for the black belt came to Kano via Japanese swimmers, who wore a black ribbon around their waist to symbolize their advanced level.
Later on, a traveling Judo instructor introduced the different colored belts when teaching in Paris. According to him, westerners needed more ranks and instant gratification compared to the Japanese. 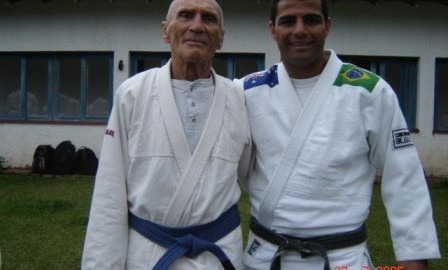 The Gracie Jiu-Jitsu belt order had a similar development to Judo belts. In the earliest days of Gracie Jiu-JItsu (the 1950s), there were only two belts for Jiu-Jitsu practitioners – light and dark blue. People that were training to become instructors wore a light blue belt, while instructors had dark blue belts. This system existed until the late 1960s. During that period, the belts represented the level of teaching skills practitioners had, rather than how fast they learned techniques.
The black belt in Brazilian Jiu-Jitsu was first introduced in 1967, along with the distinguishable bars on the end of a BJJ belt. The role of the bars was recognizing whether someone or not is just a black belt practitioner, instructor, or professor. A black belt with a white bar means someone is a black belt practitioner. The full red bar means an instructor, training to become a professor. Finally, the red bar with white borders on each side represents a Professor of the Gentle Art. Moreover, the bars distinguish BJ Jbelts from all other martial arts belts.
There’s also a very specific Jiu-Jitsu belt order for children. The system of kids belts was introduced by Hello, based on the similar one used in Judo. According to Helio, adults and kids needed to be clearly separated, hence the different belt colors to this day.

What Does Every Belt Level represent Today?

Everyone has their own journey through the belts of BJJ. However, the Jiu-Jitsu belt order is the same for everyone, and everyone has to go through some common phases during each belt level.
The White Belt is when you get a real introduction to what JIu-Jitsu is. Feeling lost, overwhelmed, and like your everyone’s rest round comes with the territory. It is a learning experience on so many levels and acts as an initiation period. Surviving the white belt means you can really start doing some Jiu-Jitsu.
At Blue Belt, one of the most important things in BJJ happens, and it has nothing to do with technical skills. What people realize at this time is how big of an ego people have, and how much of an obstacle it can be. Mastering your ego (because you can’t really leave it at the door) is the blue belt milestone. That. And discovering different annoying ways to stop everyone from submitting to you. 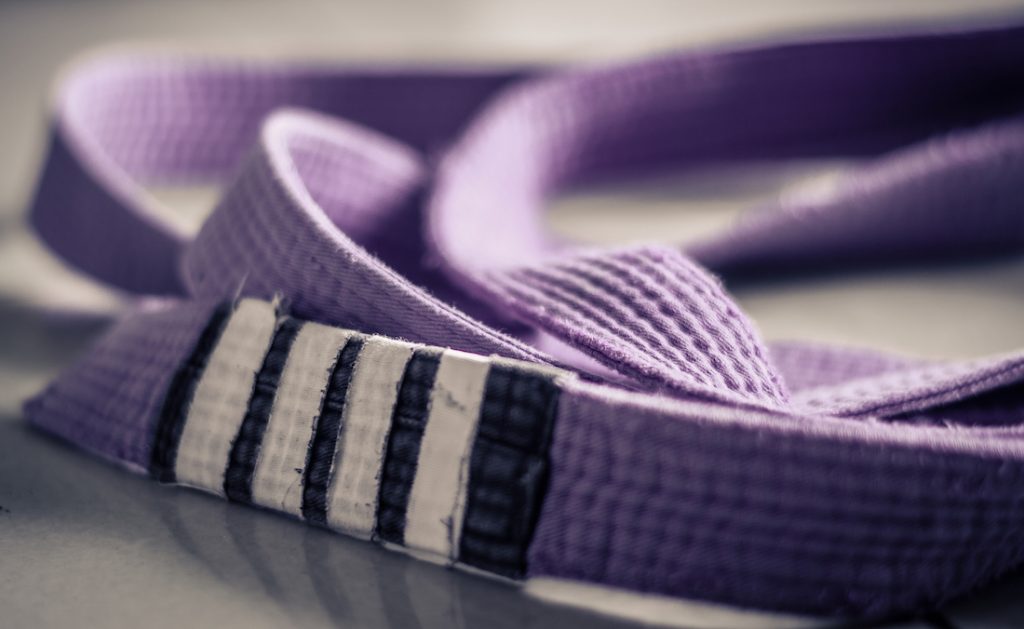 As a Purple Belt, you’ll really begin to touch on the true nature of BJJ. This is the time when you find yourself in the BJJ world, along with your specific style. Lots of guard work, experimenting with different submissions, going hard against anyone and always skipping warm-ups marks the moment you’re truly a purple belt.
By the time you reach Brown Belt things will finally start to make sense. In the JIu-JItsu belt order, this is the belt where everything you did before clicks together. It is when you start to understand Jiu-Jitsu and, suddenly, things look much simpler and very logical. What marks this belt is that you stop taking BJJ so seriously, meaning you finally get to have some fun with it.
Finally, a Black Belt symbolizes your Jiu-Jitsu maturity, of sorts. What it really signifies is that you can start re-learning BJJ all over again, just at a level that’s completely alien to anyone training except maybe advanced brown belts. Oh, and you get to toy with people. A lot.

Finally, let’s talk about BJJ belt promotions. The most painful subject for most people. Remember how that old-school Judoka that came to teach in Paris discovered westerners require instant gratification? He was more than right. People can’t wait to get to the next level constantly, and they tend to miss out on lots of important things along the way. Still, the BJJ promotion system is one that doesn’t just let people get to the next belt level without earning it.

One of the best things in Jiu-Jitsu is that when you’re time is that when you’re ready, which is something the instructor decides, you get called out and just get a belt tied around your waist. That’s it. Well, that, and all the crazy and controversial promotion ceremonies taking place around the world.
Another thing to touch on in terms of the Jiu-Jitsu belt order is stripes. Promotions usually end up with people earning one or more stripes that go on the black bar at the end of their belt. It is a great way for people to measure progress, and get constant rewards on their way to the next belt level. Given that a BJJ belt takes about two years on average to earn properly, this really helps keep people in the right mindset. Imagine if you had to wait for 6-7 years as a light blue belt, just o get a dark blue one?

As far as I am concerned, the JIu-Jitsu belt order works perfectly. As long as people do not abuse it, by giving away belts for money, the standard of belts in BJJ is going to be high and the art will continue to evolve rapidly. On the other hand, I can’t stop but wonder, how would BJJ look if all we had were the two shades of blue or simply white and black belts?