Jeff Glover is definitely one of the most entertaining, innovative and fun personalities in the BJJ world! The man might not be competing anymore, but that just opens up space for him to do other stuff, stuff we’ve waited to see for a long time. For example, he has been extremely active running his own brand of competition, while also relentlessly issuing BJJ DVDs. A great example of his video material is his last “Choke Artistry”: instructional which is, well, your typically atypical Jeff Glover DVD.

If you are a fan of Jeff Glover, you know how much he loves choking people out. He is one of the first people to really get into the depths of the Darce choke, becoming a real menace with it. However, his efforts don’t stop there, and as he is a real chokes aficionado, in addition to developing crazy guards and some nasty leg locks In fact he does have his own takes on chokes as well, which is something you’ll see in his Chokes Artistry BJJ DVD.

Is Jeff Glover the funniest man in Brazilian Jiu-Jitsu? Who knows. From what I’ve seen, though he certainly ranks at the very top. he is not just unusual in his fighting style but also in his teaching style. Whether it is live or through a DVD instructional. Simply put Glover has always been a breath of fresh air in the world of Jiu-Jitsu, and still keeps on being one today. I guess it is now that we need folks like him more than ever. 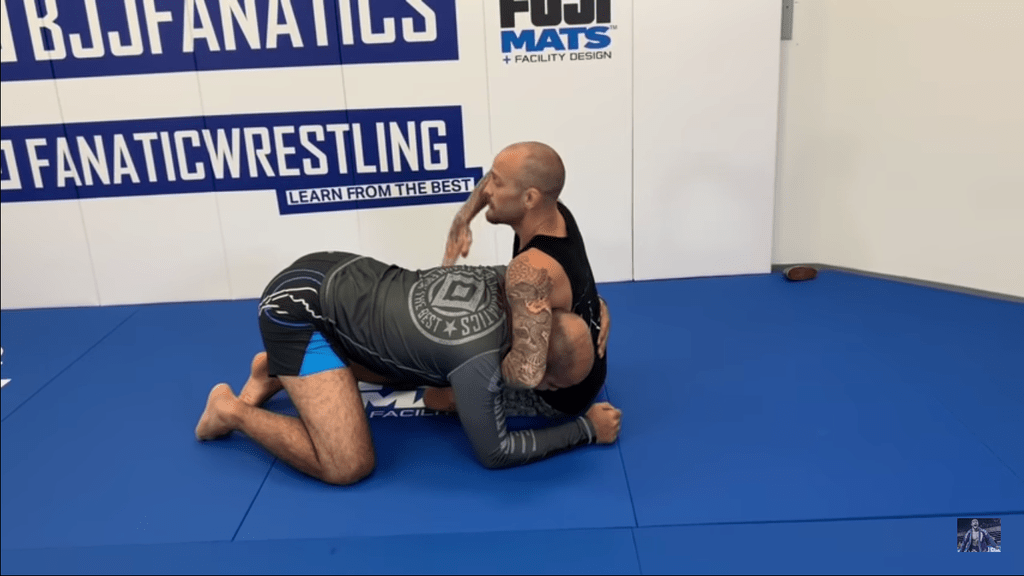 Don’t get me wrong, philosophical and methodical Danaher-type breakdowns have their place in BJJ, as do Eddie Bravo’s crazy stuff, but from time to time, we do need a dose of Jeff Glover madness as well. Somewhere in between the craziness of Bravo and methodology of Danaher, lies his unique brand of Jiu-Jitsu that has provided us with the likes of the Donkey guard, as the pinnacle of Jeff’s creative outbursts that have actually worked at the highest level of competition.

A No-Gi world champion with a rich competitive background, Glover actually managed to pull of crazy stuff in tournaments all the time. That approach is not one we see often with grapplers, who try o squeeze out a win any boring way they can. That is precisely why when I see a Jeff glover DVD on the horizon, I get excited. Choke Artistry once again proved that there’s always something new and crazy to come out of Glover’s mind.

Choking People As An Artform

If you consider chokes to be simply effective ways of putting people to sleep, I’d point you to the “Choke Artistry” Jeff Glover DVD. It will prove that choke can actually be an art form of their own if you just go deep enough into the endless pit of opportunities that grappling provides. Jeff has been down the rabbit hole and has certainly figured out some Mad Hatter type of stuff while down there.

While Glover is a fan of front headlock chokes, he also doesn’t shy away from arm triangles or strangles from the back. In fact, he likes to mix everything up, from regular stuff like a rear-naked choke, to Gogoplatas and crucifix attacks you’ve never thought of before. The artistry part lies in how he connects everything into one brutal, never-ending loop of choking submissions that is impossible to get out of.

The “Choking Artistry” Jeff Glover BJJ DVD instructional is a three-part one, featuring a wide array of submissions. They are all centered around chokes, although they are not all necessarily strangles. Once again, there are crazy details on choke s we think we know, as well as some choking options that nobody has ever seen before. After all, it is Jeff Glover we are talking about.

The three parts of the DVD all feature different choking options, with and without the Gi. Oh, yeah, this is a Gi instructional so you can expect a lot of innovative lapel and collar work.  The instructional opens up with some basic Gi chokes, moving on to crazier versions of Gi and NO-Gi chokes, before finally coming to a close with a volume full of Jeff’s own creations.

Jeff Glover starts the “Choke Artistry” DVD with stuff everyone knows, mostly centered around choking with the help of the Gi. The first choke he goes over, after a short intro of course, is the baseball bat choke. this elusive choke that works from both top and bottom has some funky details that often escape people. Trust Jeff to point them all out and solve this choke once and for all.

A few other staple Gi chokes follow, in the form of the loop choke, Ezekiel choke, and X-choke. Out of all of them, I particularly enjoyed Jeff’s take on the loop choke, as it is highly unusual and features slightly different arm placement than what we’re used to. After trying it, however, I’ll likely never go back to the “old” version again.

In the second volume of the Instructional Jeff steps it up a notch, combining a bit of Gi and No-Gi chokes together. The bow and arrow come first, with an interesting twist (literally) to things. There’s also some key angle discussion in there that will change the way you approach the bow and arrow.

Going forward, the Brabo choke makes an appearance, with all the craziness that you’d expect from Jeff with it. Given that the Brabo is just another name for the Darce, it is somewhat of Glover’s specialty and he paves it by demonstrating Gi and no Gi version of it that will get you more taps than ever before. From there, he goes into lapel chokes, before using the head and arm choke to transition into the world of No-Gi chokes, albeit shortly.

The guillotine choke is the final piece of the puzzle in the second volume of this Jeff Glover instructional DVD. 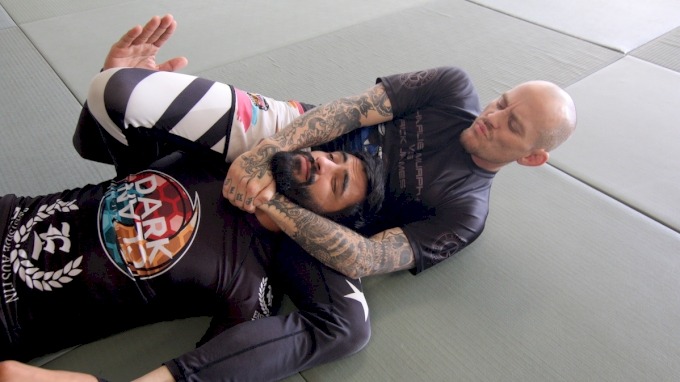 Finally, a volume filled with some innovative and typical Jeff Glover stuff. Everything, from the adjustments and variations of the moves we know, to the names of those we don’t, simply screams Jeff Glover. I guess this volume is where the “Choke Artistry ” DVD earned its name.

Opening up is the Gogoplata, as the most “usual” of chokes demonstrated here. How come? Well, the other options include the “7-year-old choke” for example, which will have you stare with an open mouth for several minutes. But that’s not all.

Jeff uses this final volume to demonstrate key twist to the rear-naked choke, crucifix choke, and forearm choke that will provide you with a different dimension of back attacks. There are crazy useful details in this DVD, and Jeff tops it off with a rolling session where he shows not just all the chokes he demonstrated, but also creative ways of linking them together and transitioning.

Jeff Glover always has something interesting to show. On the subject of wacky ways to choke folks unconscious, he is pretty much the authority. “Choke Artistry” is exactly the BJJ DVD you would expect from Glover – unorthodox, attractive, and efficient. Gi and No-Gi chokes included, this instructional will make you a better submission artist. 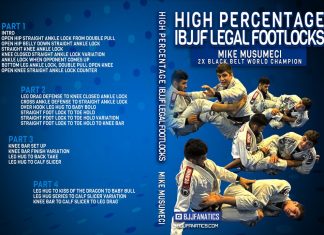 0
Brazilian Jiu-Jitsu instructionals on the subjects of leg locks are popping up left, right and center these days. As BJJ attempts to catch up...