BJJ in real-life situations works! In the latest examples that prove this notion true, a grappler in New York City used his grappling knowledge to subdue a man who was trying to snatch a baby. Who says grapplers do not possess superpowers?

In the video below you can see the NYC local Muay Thai and fighter and grappler Brian Kemsley subdue a man who was trying to kidnap a baby. The perpetrator was trying to steal a woman’s baby from a stroller when Kemsley arrived by chance, walking with his girlfriend.

When Kemsley arrived at the scene, two men were already trying to confront that man in Madison Square Park. Brian immediately saw that the man was a treat so he used a rear-naked choke to bring the man down while obtaining back control. Not looking to injure the man, Brian switched from a choke to a seatbelt with two hooks in and kept the man there until cops could arrive. It took about 30 minutes for them to show up, but park security did turn up after 15 minutes to help restrain the man and give Brian a rest. BJJ in real life at its best!

The man was trying to say stuff like “How do you know this isn’t my baby? Why are you helping her? This could be my baby, you don’t know that,” but that did not change the situation. In fact, 33-year old Brian’s instincts were spot on, as the man ended up in a psych ward.

“I think New Yorkers in general tune things out a lot because we hear yelling and screaming all the time,” Kemsley said. “This one was different. This one you could tell there was a very intense altercation going on.”

Kemsley perfectly demonstrated how BJJ in real life works. He did not hit or injure the man but rather used a controlling position to subdue him and keep him in place until help arrived. As you can see from the video, other people jump in to stop the man from moving toom too much from time to time, but Biran had the entire thing under control throughout the incident.

that is exactly how grappling in a real-life scenario works. Brian, a trained Muay Thai fighter, could have easily used striking to take care of the man but opted for the “Gentle Way” instead. A solid back control, as can be seen when he switches from side to side, and great positioning meant he could easily control the man without having to use submissions or other more invasive techniques in the process.

Kudos to Biran, and yet another statement of how effective Brazilian Jiu-Jitsu can be!

Guy Uses Jiu-Jitsu to Stop Kidnapping Attempt of a Child 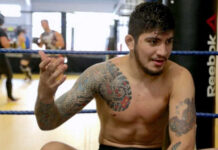