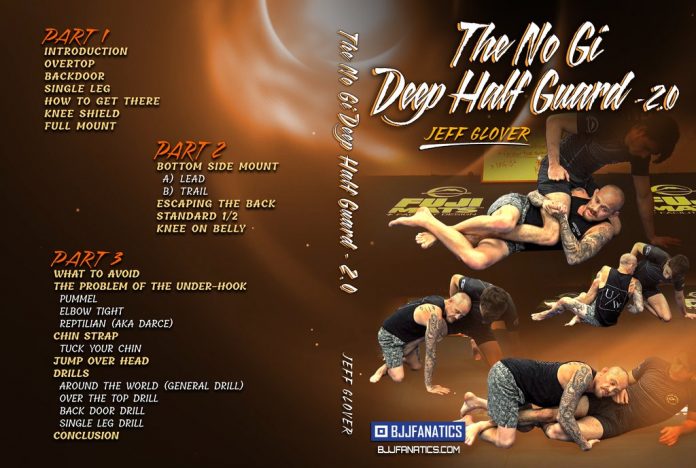 Well, well, this one is long overdue. By chance, it is also the first DVD review I’m doing in 2020. It is only fitting that it is a Jeff Glover DVD, and not just any DVD. It is an instructional on the No-Gi Deep Half Guard 2.0, something that’s as much a trademark of Glover as are his D’arce chokes and his donkey guard. As a black belt, Jeff is right up there with the best of them. As a competitor, he is one of the most entertaining to watch. Finally, as a coach, he is simply irreplaceable, both in terms of knowledge and the entertainment factor. One of my all-time favorites, and soon to be yours too.

ON SALE HERE:
Jeff Glover – The No-Gi Deep Half Guard 2.0

The one thing that might not happen In the near future is us seeing Jeff Glover use all the stuff he is demonstrating in the No-Gi Deep Half Guard 2.0 DVD in competition. At the inaugural High Rollerz tournament, Glover went out in a blaze (pun intended). Announcing his retirement. I’m kind of torn between the opportunities his retirement might mean for the rest of us and seeing him compete. By opportunities, I mean a surge of Jeff Glover DVD instructionals that would be awesome, seeing as there’s a real shortage of those. Yeah, there are a few older titles, one even on the same subject – the deep half. However, Jeff is one of those guys that evolve day by day, and he comes up with really crazy stuff. So, I expected to run into some nuttiness in this DVD, to say the least.

If there’s one thing Jeff Glover is not, that would be boring. Conversely, you can expect any Jeff Glover DVD to be much of the same. I first fell in love with his teaching style via the “Darcpedia” instructional. The title is pretty self-explanatory, it is a D’arce choke DVD. It changed my game forever, and I decided to look into who this entertaining Glover character really is.

Glover has been a black belt for the better part of 15 years now. That’s a pedigree on is own. He got his black belt from Ricardo Miller, of the Rolls Gracie lineage. In terms of titles, Jeff has a No-Gi world title to his name (2007) as well as being a runner up in the first-ever EBI and an ADCC bronze medalist. He is known for competing in pretty much every submission-only invitational tournament out there and pulling off some really unique stuff n most of them. Although a part of the Paragon academy, he very famously spent some time going around the USA training with everyone, something which is documented in a series dubbed “Glover’s travels”. That’s a great way of earning great experiences.

Glover is also a huge innovator, with the Donkey guard being his most notably extravagant position. However, despite creating that nuttiness, he also has huge contributions to other aspects of JIu-JItsu. He is one of the original deep half guard masters, for example. In fact, I think there’s nobody better when it comes to the No-Gi deep half guard. On the same subject,t there aren’t that many deep half guard No-Gi instructionals out there anyway. Certainly not by world champions of Glover’s caliber. So, sit down, buckle up and enjoy the ride. Ti’s going to be a crazy one, I can promise you that.

The No-GI Deep Half Guard

Just a touch on the NO-Gi deep half guard before we head off to analyze this brand new Jeff Glover DVD. As a position, the half guard is a highly versatile one, fitting grapplers of all ages, builds, and sexes. Still, there’s one variety of half guard, that’s simply more effective than the others. That is the deep half guard. How do we measure its effectiveness? Easy. What matters is how easy you get there. How long you can remain in it and be safe without any exertion whatsoever and how many high-percentage attacks you have available. The deep half guard ticks all boxes, and then some.

This Jeff Glover DVD is divided into three distinct parts. The three-part format is as close to “usual” as you can get with a Jeff Glover DVD. Every other aspect of the No-Gi Deep Half Guard 2.0 instructional is deep into Glover territory – innovative and ultra-effective. The quality of the DVD itself is as usual, flawless. Sound, camera work, length, and content quality are all exceptional. Speaking of content, Jeff has his stuff divided into a few different categories.

The first volume starts by introducing you to Jeff’s deep half guard, and all his ways of getting there. The second portion goes into some more unorthodox ways of entering the deep half guard, divided into very original and interesting chapters. Part three is the longest, outlining common problems, and all the best attacks form the position you can think of, and just as many you’ve never even thought possible.

How exactly does this Jeff Glover DVD work? Of course, it starts with an introduction. The real challenge is actually getting to the good stuff Jeff says, among all the humor he employs. It is a great and fun way to learn things, and they tend to stick with you. It does so for me, at least.

Apart from really putting the NO-Gi Deep Half Guard into perspective like nobody else, Glover shares lots of entries in this first volume. He covers the overtop and backdoor first, as well as talking about the single leg. While most people end there, this s just the beginning for Glover., The deep half is available from everywhere, whether you’re on the bottom in another guard, or in a bad spot. In terms of the guard, he shares an awesome knee shield entry that’s completely out of the blue. From there on, it’s all about escaping bad spots to the safety of the deep half guard.

While the second volume of this instructional is where most escapes to the deep half guard are, this portion actually starts in the previous volume. The entry into the deep half form bottom mount concludes the first part, announcing what we can expect in the second one at the same time. Other topics include getting out of side control, the back and even knee on belly. IN fact, the bottom side control escape is really unique, and Jeff goes into extreme detail on it. He also covers two versions of it, depending on whether you’re in the lead or training.

A “standard” half guard entry, that’s anything but standard, concludes this second position of the No-Gi Deep Half Guard 2.0 Jeff Glover DVD. 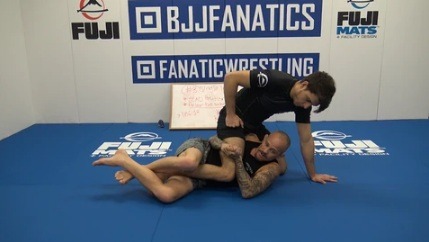 The third and final portion is almost as long as the two previous volumes put together./ Jeff Glover at his best, once again. This is a volume that covers a few different subjects, ranging from common problems to going into attacks an even some never-before-seen drills. ON the first of those subjects, common problems, Jeff really breaks down the “issues” of holding the deep half guard without a Gi. The underhook is the main problem, of course, and Glover offers several different solutions. Because why just have one answer? He is a master of explaining what you should avoid doing in the deep half, and what you should be wary of. Another example is the chin strap, which is quite a big deal if you’re not careful.

The second portion of the last part is all about drilling. Glover goes into a general drill called around the world that really made me start feeling comfortable in the deep half guard. Following suit are a few more specific drills, like the over the top, back door and single-leg ones. They cover moves previously shown in this DVD, offering a great and fun way to really get these moves down. A short conclusion hints the Glover is not done with DVD’s and we can expect other stuff from him as well.

There’s no way you can hate on a Jeff Glover DVD. Regardless of the subject, you’ll learn something new and exciting. Moreover, when he is talking about one of his specialty position, you need to do anything you can to jump to the top of the queue. I know I did when I heard there’s a Jeff Glover No-Gi Deep Half Guard 2.0 DVD out and about. I’ve tried several things and they work perfectly, What more important though is that this instructional answers fundamental questions about the position, and how you can play it without a Gi at the highest levels of the sport.

ON SALE HERE:
Jeff Glover – The No-Gi Deep Half Guard 2.0