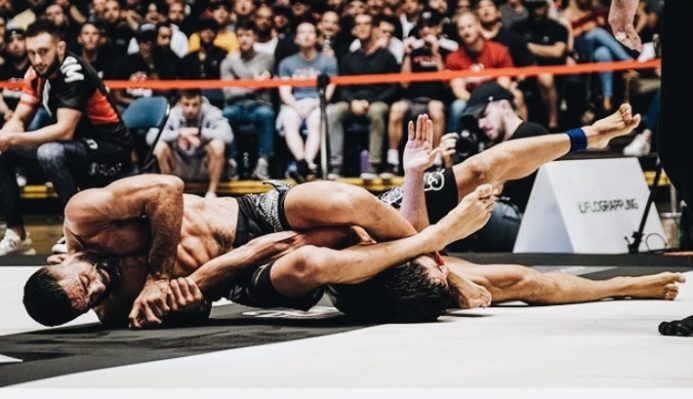 What’s your favorite BJJ submission? What about the one that works the most for you? If you take a close look you might just notice that the two are not the same. As time passes by, you come to see that in Jiu-Jitsu, certain submissions work a lot more reliably than others. Now, there’s no real rule here, as people are differently built. Moreover, they have varying degrees of success with different submissions. However, have you wondered what the highest percentage Brazilian Jiu-Jitsu submissions are across the board? It is about time we answered that question.

When it comes to the highest percentage Brazilian Jiu-Jitsu submissions, the key is how we determine their percentage rate. An often-used method is asking people what their highest percentage submission is and extrapolating an answer from there. Unfortunately, this does not give a real picture. What works is looking at competition data, and the highest percentage finishes over a period that is as long as possible. To that extent, there’ is not much information available, but after some painstaking research, we seem to have a winner.

The Highest Percentage Brazilian Jiu-Jitsu Submissions Of All Time

It would be hard to determine the real percentage of Brazilian Jiu-Jitsu submissions over the entire period of the sport’s existence. The reason is simple – som of the moves have been around since day one, while other sare newer. Moreover, rulesets have discredited certain moves over the years. Heel hooks, for example, are a really great submission that appears to be a lot less effective than it is. All this in consideration though, calculating percentages is precise work that doesn’t leave much to the imagination. That means that although we’re aware of heel hooks and similar subs that are “underground” work when it comes to our highest percentage submissions selection, they won’t really rank high.

Out of the moves you’d expect to be ranked the highest, the triangle choke, the armbar, and rear-naked choke are probably on most people’s minds. That’s true, although you might just end up surprised as to which one is actually the undisputed number one. Others you’d expect to feature are Kimuras, Guillotines, D’arce chokes, lapel/collar chokes, certain foot locks, etc. They all have a place in the statistics, just probably not as high as you might expect.

That said, statistics shouldn’t be the basis upon which you decide your highest percentage or favorite move. Statistics only show what people use the most. When you realize that most BJJ practitioners in the world are white/blue belts, it is easy to see how the fundamental moves end up ranking the highest on the list. It is just one of the finer intricacies of calculating the highest percentage of Brazilian JIu-Jitsu submissions that we encountered.

The Undisputed Number One

I have to be honest, the number one BJJ submission, in terms of percentage at competition surprised me as well. I’d have thought that with all the hype the rear-naked choke is the most reliable and often used one. I guess all that hand fighting does the trick because the RNC does not come even close to the leader – the armbar.

In one study that analyzed 500 matches, dividing them equally according to belt level (a hundred of each belt level) and Gi and No-Gi (50/50). The armbar ended up “winning” with a convincing 123 finishes, or 25% of all Brazilian Jiu-Jitsu submissions. What’s more impressive is that it was the highest-ranking submission in Gi, NO-Gi, and evenly used at every belt level, white to black. 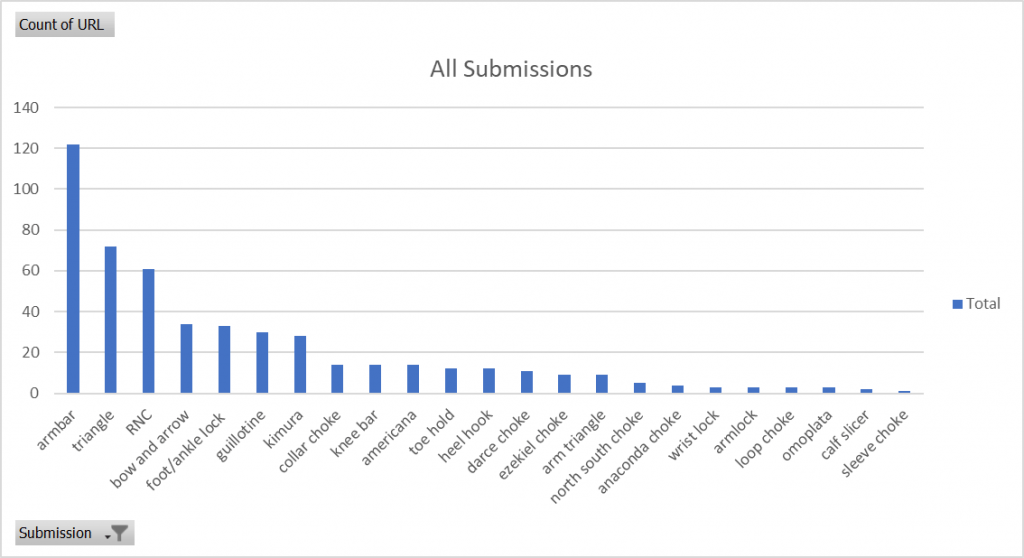 A similar study analyzed over 4.000 matches, in the period between 2015 and 2017. This time, though, they were all sub-only matches. The results show that the armbar rules with 1002 finishes, or once again, around 25% out of all the submissions.

Data obtained from the IBJJF World Championships between 2015 and 2017 further confirms the armbar’s supremacy. The number of finishes is 13, 12, and 9 armbar finishes, respectively. Chokes from the back do appear more in number in each of these editions of the Worlds. However, they include all types of chokes from the back, meaning that when looking at one particularly submission technique, the armbar remains unbeaten.

Along with the armbar, there are two more Brazilian Jiu-Jitsu submissions that account for more than 50% of all submission finishes in all of the studies we could come across. Those two moves are the triangle choke and the rear-naked choke.

The Rear naked choke or the submission most people (me included) thought to be the highest percentage I actually coming in a close third place. Out of the 500 mixed belts Gi and No-Gi matches, it featured a total of 60 times or around 12%. Interestingly enough, when looking at 4.000 sub-only matches, the Kimura beats the RNC ever so slightly. The choke caused 382 taps, just four less than the Kimura. At the black belt level in the Mundials, the rear-naked choke is put into the “chokes from the back” category and exact numbers are hard to extrapolate. 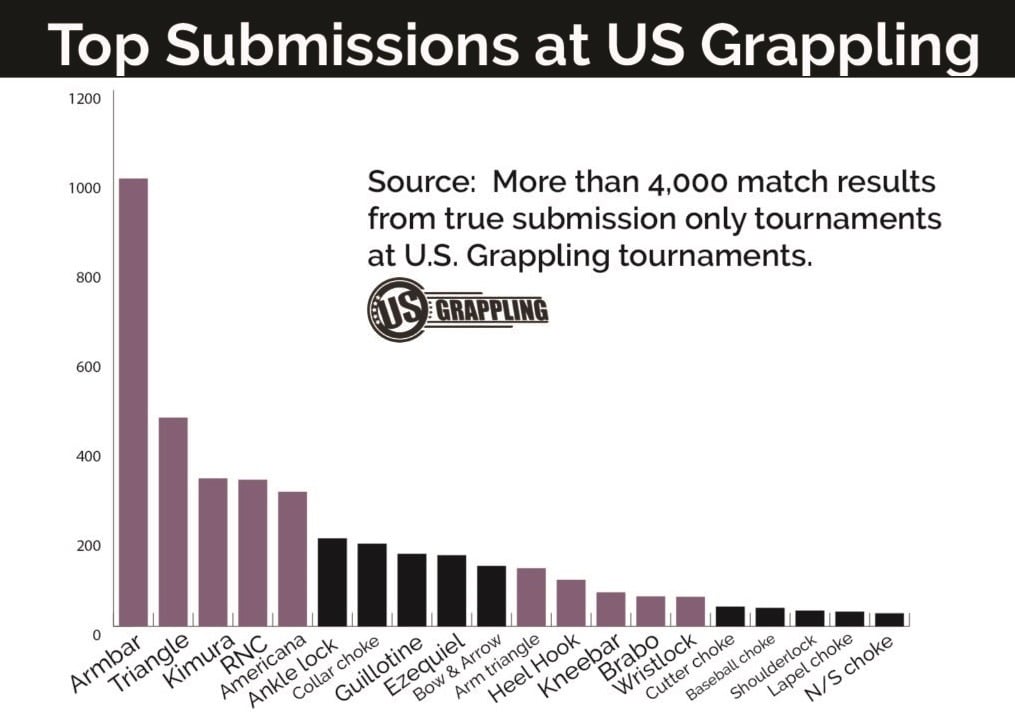 While these Brazilian Jiu-Jitsu submissions are not really up and comers but have been around for a while, I do expect us to see more of them in the future. Who knows, one of them might just upset some of the top contenders. I have my money on heel hooks and the Brabo, but that is because I’m highly biased towards the submissions

Among the Brazilian Jiu-Jitsu submissions that are very much worth your effort, the bow and arrow choke, guillotine choke, and ankle locks are things you definitely need to add to your arsenal. They account for a good chunk of submissions in both GI, No-Gi, IBJJF, and submission-only match finishes.

Closely following are my personal favorites. The Brabo and heel hooks, along with all the other leg locks (toe holds and kneebars) remain underused, mostly due to rule restrictions. The Ezekiel choke, with total use of 10 (2%) out of 500 matches and 135 taps out of 4.000 matches (3%) rounds off the most effective subs you can use in competition, across all belts and platforms. Everything else appears too little to really factor in as a high percentage submission. That said, this does not mean that all other subs are inferior.

As I said, there are not many sources that really compile statistical data in a way that makes much sense. However, out of the sources, we could find and trust, given the methodology used and the number of matches analyzed, it is fair to say that the conclusion is clear – the “basics” work best when it comes to Brazilian Jiu-Jitsu submissions. And out of all those basics, looking for a straight armbar is statistically, your best bet to get a tap.