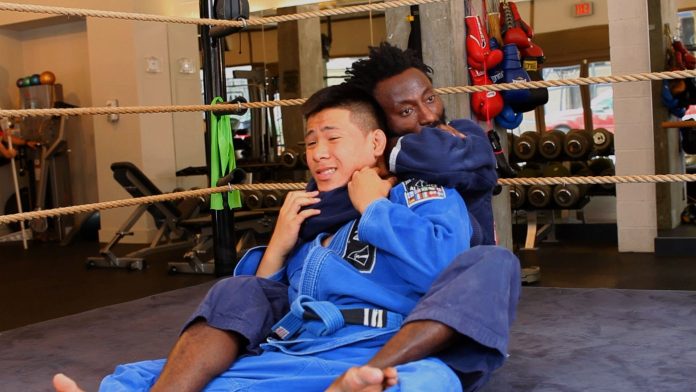 The rear naked choke.A Brazilian Jiu-Jitsu classic, the move that brought BJJ to the forefront.It is still to this day one of the highest percentage submissions in grappling. Actually, it is a very effective weapon in all of the combat sports that allow it. It is still the number one submission in MMA and is a staple of law enforcement training. The rear naked choke is a highly-efficient and easy to use the move in any situation. Performing the rear naked choke requires you to be in back control, which is arguably the most dominant BJJ position available. In short, this is the ultimate weapon to conquer any opponent, regardless of size, strength and/or experience.

For the basic version of this powerful choke, complete3 back control is a must. This means having a seatbelt grip on the opponent’s torso and both of your leg hooks in. A seatbelt grip is when you have one arm over the opponent’s shoulder and the other under the opposite side armpit. Just like when you have a seatbelt on in your car. Similarly, the top hand goes in the bottom one for efficient control. The hooks refer to the position of your feet. You need to have both feet on the opponent’s hip folds, fingers facing to the outside.

The choke itself requires you to thread the top seatbelt arm below the opponent’s chin and around the neck. The goal is to touch your own shoulder on the opposite side. It is crucial to have your elbow right below the opponent’s chin. The point of the elbow should be bang in the middle right below the point of the chin. Unless you achieve this, you won’t be able to pull the choke off effectively. Securing the position requires you to place the forearm of your other arm behind the opponent’s neck while placing the palm of the choking arm in your elbow. To finalize the position your head must go as close to their head as possible. Choking pressure comes from squeezing the choking arm while pushing on the neck with the other one.

The rear naked choke is first and foremost a blood choke. The placement of the arms means you’re constricting the carotid arteries on both sides o the opponent’s neck. This cuts off the oxygen supply to the brain, putting the opponent to sleep in seconds.  It is essential to have everything set up right so that you can achieve the blood choke. In real circumstances, people look to block the arms, open the hooks, pull on your palms and everything else to defend the choke. When this happens, finishing the choke can turn into a real hassle. Luckily there’s a rear naked choke variation straight out of hell, that is immune to any and all possible defenses.

A source of great control for the back position is a body triangle. Before you even think about setting up the choke, make sure you have the utmost control over the opponents. A body triangle means you have one leg across the opponent’s belly, with the other one securing a triangle. This method of control ensures both complete control over the hips as well as a source of painful discomfort. Squeezing on the triangle is both painful and makes breathing very hard, which puts the opponent in a state of panic. The higher you are on the belly and nearer the ribs, the better.

Your efforts from this position are going to result in the opponent attempting to dismantle the triangle. This means their arms are occupied and you can go for the choke. Make sure the triangle is locked on the top side of your opponent and keep the pressure on.

This is a very cool little hint to make sure you can get your choking arm on the neck. The chin can be a great barrier, even when the opponent’s hand are not in play. Once your opponent is busy with the body triangle you can easily move your choking arm out of seatbelt control. Toa goal is not threading it all the way back, as the chin is going to get in your way for sure. Instead, look to grab the outside of the opponent’s far side shoulder as deep as possible. This grip is notoriously hard to strip off, even if the opponent uses both their hands. Furthermore, it makes getting into choking position much easier.

The next step in the puzzle is getting your arm into choking position. Shoulder hook in, this is where you really use the body triangle. Squeeze hard with your legs and do a hip extension. This is going to stretch out your opponent, allowing you to squeeze the choking arm through, regardless of chin position. Once in, go deep. The goal is to reach the opponent’s shoulder blade with your grip. Don’t worry about elbow alignment at this point, just go as deep as possible. here’s the crucial trick. Use your fingers to dig into the opponent’s shoulder blade s hard as possible. This is an unmovable grip that’s going to further tire out your opponent. As you’ll see later, you could simply finish at this point, but let’s see how to get a proper rear naked choke first.

This setup often results in the opponent’s chin pointing to one side. Since this is not the optimal choking position, you’ll need to align your elbow with the chin. To do so just release your bottom seatbelt arm and make a fist. Now use the fist to push the opponent’s chin into place, namely towards the point of the elbow.

Contrary to popular belief, you do not need to release the choking arm in order to get a figure four. Instead, as you’re positioned with a deep shoulder grip and a body triangle, chin in place. Thread your free arm into position, deep behind the opponent’s neck, palm on their shoulder. Once this arm is in, lift the elbow slightly towards the top. This is going to create enough space to release the shoulder grip and complete the figure four. Now you’ve got the choke on.

If everything is in place as described, you can get the choke right there. to remove any doubt, though, here are the finishing details from hell. Your elbow might still be ever so slightly off but you must not open the figure four configuration once you get it. So, instead, you’ll look to turn your torso towards the side where your arms are locked with each other. Go as far as possible. Once you do that, the chin and elbow are going to fall firmly into place. To finish, you must first rotate back. This is only going to tighten the choke because now you have better alignment.

To finish, simply go for a squeeze and wait. If after 10-20 seconds you still don’t have a choke for some reason simply pull the elbow of your choking arm to the outside. Instant tap or a sleeping opponent. No defense, no counters, no energy spent. Straight from hell.

A great choke variation comes from one of the most brutal strangle artists in the game, Neil Melanson. In situations where you can’t manage to get the choking arm deep enough, you can finish it right there. From a shoulder hook just look to grab as deep behind as possible. Keep your other arm in the seatbelt position and use it to control one, or both of your opponent’s arms. Of course, a body triangle is still the best method of hip control. When in position, simply push your head as hard as you can into the opponents head and forward. then go for a sawing motion with the choking forearm. by pulling your elbow to the outside. This is more of an air choke because of the arm position, but an effective one nonetheless.

For all those of more vicious nature, even when a rear naked doesn’t work you can go for a jaw crusher. It has worked in EBI on multiple occasions and is a legit move. When you just can’t thread the choking arm under the chin, simply go for a rear naked choke with the chin in the crook of your elbow. The more their head is to the side the better, as you have an added neck crank. this is a very painful way to tap someone and not legal in every competition.

Finally for all you Gi only grapplers, here’s a useful tip. Go for the rear naked choke first. even if you have direct access to the collar. Even if the opponent manages to defend it, you’ll still have a collar choke fallback. in fact, choking with the Gi is going to be easier because you’re already deeper than when setting it up directly.

Black Belt Tips To Finish All Of YourChokes
The Highest Percentage No-Gi Jiu-Jitsu Chokes
The Hidden Secrets Of The Reverse Triangle Choke
Top And Bottom Baseball Choke Setups For Jiu-Jitsu
Deconstructing The Mechanics Of The Darce Choke
The Arm Triangle Choke Encyclopedia For Grapplers
Everything about BJJ Chokes – Systematization, Anatomy, Efficiency