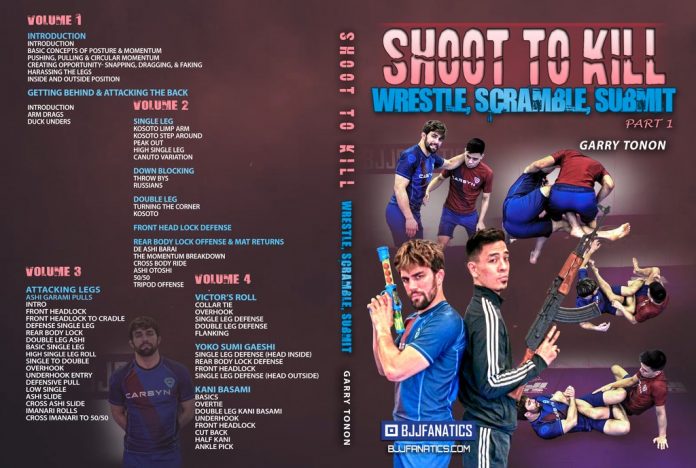 The Lion Killer is back again, doubling up on his tally for BJJ DVD instructionals. While it was pretty unexpected of him (although entirely understandable) to release an escapes DVD as his first one, his second instructional comes as no surprise. Garry Tonon has, arguably, the best wrestling in BJJ today, and perhaps even MMA. Time will tell for the latter, but after his displays at the ADCC, there’s no doubt when it comes to Jiu-Jitsu. Now, his take on wrestling for BJJ is neatly organized in the Shoot To Kill: Wrestle, Scramble, Submit Garry Tonon DVD.

Be honest, what’s better than a Garry Tonon DVD while stuck them in isolation? With the protective measures slowly but surely starting to loosen up around Europe it is only a question of time until we’re all back on the mats. And that means this is the perfect time to check out The Shoot To Kill Garry Tonon DVD which has 8 parts and about 10 hours running time, meaning there’s a lot of material to cover.

The Best Wrestling in BJJ?

In terms of Garry Tonon and his BJJ success, I doubt anyone needs an introduction. If so, stop reading this Garry Tonon DVD review and pick up Shoot to kill: Wrestle, Scramble, Submit immediately. No really, you need ti more than anyone. If you’re aware who Tonon is and what he has accomplished, you’re most likely already itching to learn more about his talk about wrestling style.

Garry is a very complete grappler, although, due to his association with the Danaher Death Squad people often think of him as only a leg locker. Tonon is much more than just that, and he has one of the most exciting grappling styles in the world. He definitely is a submission machine, but his arsenal extends far past just leg locking. On top of that, he has not been caught in a submission in quite some time as well. These are all aspects of his game we expected to see in his ADCC performance, where he actually entered unplanned.

What we got to see, though, was far more than that. Now fighting in MMA (undefeated in 5 with 3 submission and two KO victories) Tonon has developed a crazy wrestling game that is effective, unpredictable, and very impressive. His match against Renato Canuto, declared the best one at the 2019 ADCC, is a great example of how far Tonon has come in terms of incorporating world-class wrestling into his game. More importantly, he has done it in a way that compliments his BJJ game, instead of just going for pure wrestling.

Wrestling for Brazilian Jiu-Jitsu is different from your usual wrestling. A double leg is a double leg, you might say, but it is not quite as simple. The different ruleset and options in BJJ mean that you can’t just approach wrestling in the same manner. Mechanically speaking, the moves are the same, but atactically speaking, everything needs to be adjusted to fit BJJ. Moreover,e it needs to take into account whether it is Gi or No-GI, the opponent’s background, how to factor in submission, and even scrambles. In other words, everything that is in the Shoot to Kill Gaarry Tonon DVD.

Will wrestling help your BJJ? Definitely. However, if you use it smartly, as Tonon does, it will be much more beneficial than if you’re a former wrestler relying on your skills way too much. As you might know, there are ways to deal with wrestlers in BJJ, but there aren’ t many to deal with people that have efficient wrestling for BJJ. Again, that Tonon vs. Canuto fight is a wonderful example of this.

This is a unique instructional, as you’d expect from a Garry Tonon DVD. just like with any DDS release so far, it is long, featuring 8 volumes. Watching it I got the impression Garry could go on for at least 8 more, but I guess what we get is more than enough. Frankly, there’s loads of information inside, and all of it is brilliantly organized in a unique system. The only thing to consider is that this is Garry’s system, and you will need to use what he teaches to improve your game, instead of imitating what he does.

From getting behind and his signature duck unders, Garry takes us through the single and double leg to rolling and flying AshiGarami entries and even throws in a few Judo throws for No-Gi as well. And that is all just in the first four volumes of the Shoot to Kill DVD. The second half of the instructional covers front headlocks, cradles, Kimura traps, funk wrestling, and a few original Tonon-style drills.

Introduction And Getting Behind

If you’ve ever seen Garry Tonon wrestle, you’ve probably noticed that he really likes getting to the back even from standing. The opening volume of the Shoot to Kill Garry Tonon DVD addresses this specific aspect of his unique wrestling game for Jiu-Jitsu.

Before he gets into all that, though, Garry does offer a baseline. In that sense, the fundamentals he addresses have to do with posture, momentum, push and pull dynamics, etc. there’s a really cool section on creating opportunities by using wrestling basics like snap downs and drags. Of course, lots of arm drags and duck unders follow as Tonon outlines his favorite setups and combinations.

I think this is the volume most people will turn to, as it contains information on what people use anyway – double and single legs. Duck unders are fun but will take a lot of training and drilling. The information on the “usual” takedowns, though, is something you can directly implement in your game, especially if you’re already using leg grabs. Tonon starts off with single legs, starting with the basics and heading into variation he used in different matches including a “Canuto variation”.

A few blocks and throw bys, mostly in the form of Russian ties provide a break before moving on to double leg takedown.s there’s not a lot of philosophy here, with the focus on turning the corner, which will set up Tonon’s famous pile driver double leg.

Wrapping up is a portion on the rear body lock. As I said, Toonlieks to get behind his opponents. And the rear body lock offers both great control and a perfect spot for takedown setups. From getting to the 50/50 to using momentum to break opponents down, you get some funky options to take people down.

A Garry Tonon DVD would not be complete without at least one volume covering leg locks, would it? Well, volume three is that part of the Shoot To Kill: Wrestle, Scramble, Submit instructional. In that sense, Tonon refers to Ashi Garmi entries in a wrestling sense as AshiGarami pulls. Simply put Garry shows how you can get an AshiGarmi off of every time up, form front headlocks, through the body lock all the way to cradles. Low singles, overhooks, underhooks, Imanari rolls, and some crazy AnshiGaramitranistions will; provide you with more options than you can really ever use in a match. There’s no chapter here worth pointing out – the entire volume is pure gold. 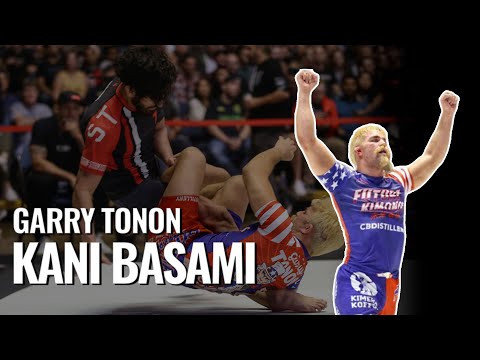 Remember the kaniBasamiTonon pulled off against Edwin Najmi at the ADCC? Well, in this portion of the instructional you’ll not only learn that but an additional 7 different Kani Basami (scissor takedowns) variations that Tonon likes to use.

On top of that, he also covers the SUmiGaeshi, and in particular, the Yoko SumiGaeshi. This is a variation of the throw that really scuppers any defense or counter an opponent might try and use. That said, the Sumi is great to use with the Gi, and Garry’s modification for No-Gi is what really makes a difference here. Oh, and he uses it mostly in a defensive manner, s takedown counter to some common attacks.

Oh, and If you’ve ever seen Sambo guys do those crazy rolls into kneebars, then you’re in for a real treat. The victor roll is something Tonon excels at, and just like with the KaniBasami, he offers a bunch of variations and some interesting details that are very easy to miss otherwise.

A staple of wrestling, and something Garry really goes for quite often. The front headlock is actually the best wrestling position that you can use in BJJ. It offers control takedowns, submission entries, transitions… you name it. But then again, there’s the wrestling front headlock, and then, there’s Tonon version. Standing guillotines – check. Cradles from front headlock – check. Flying Triangles – check. And that’s before I even mention the falling armbar and transitions to the back.

This is where the real fun in this Garry Tonon DVD begins. The sixth volume of the Shoot to Kill: Wrestle, Scramble, Submit instructional covers some of the most useful things you can do in terms of submission when wrestling. However, before showing you how to surprisingly tap people, Tonon des cover a few cradle basics first. Because why not torture your opponent’s before you submit them, right?

The kimura section is the largest one in this volume, covering a host of different setups. Some accounts to takedown attempts, while others work ina more offensive manner. The taiOtoshi setups is marvelous, as is the entire rear body lock sequence.

With the triangles, it is Garry Tonon extravaganza all day. The sie triangle is going to become something everyone uses now that this instructional is out. A few sneaky setups round off an impressive submission game based on wrestling setups.

If you thought Ben Askren had a funk wrestling style, this is the volume to change your mind. Garry Tonon’s funk is different, as it welcomes scrambles more than any other grappling style out there. In fact, you’ll learn just that – how to thrive in scrambles and unexpected situations.

However, it is not just about scrambles. In this volume, Garry covers Granby rolls, the Maki Komi Roll as well as his own brand of funk wrestling. After you learn the proper rolling mechanics, going for things like funk rolls makes lots of sense, especially when you’re all about iniv9ting scrambles instead of avoiding them. In other words, this is the volume that really contains the makings of Garry Tonon’s unique wrestling style for BJJ.

Having a final volume that has narrated rolls and certain drill sequences to help tie everything together has become a mark of the Danaher Death Squad’s instructionals. This Garry Tonon DVD is no different, with lots of focus on single-leg variations and the turtle position. There is lots of live work in this volume (all of it, in fact) but done at a speed that allows you to identify everything Tonon presented in earlier parts of the Shoot To Kill DVD. Once again, a perfectly put-together BJJ instructional.

Whichever way you look at it, a Garry Tonon DVD is a great way to learn grappling and p[ass time inneresting fashion. Garry is always entertaining, both in his style and the way he teaches. The 8-part Shoot to Kill, Wrestle, Scramble, Submit instructional is one that will most likely change the landscape of wrestling for BJJ. Either that or the lucky ones who own it will dominate everyone ina very funky and impressive fashion.