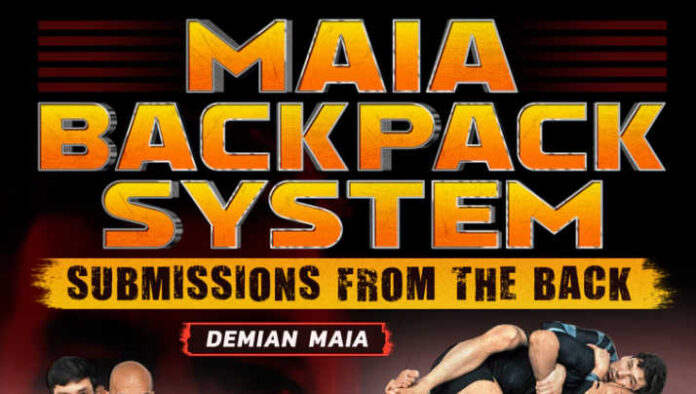 In Brazilian Jiu-Jitsu, there have been many trying to claim the title of the best back taker. Marcelo Garcia, Roger Gracie, Gordon Ryan are just some of them, but nobody has really cemented their name too firmly. In the world of mixed martial arts though, the answer is easy. that man is Demina Maia, a BJJ wizard who has been in the UFC for more than a decade. Now, there’s a Demian Maia BJJ DVD that outlines his proven system of attacking the back. Let’s see what it contains.

The title of this Demian Maia BJJ DVD is “Maia Backpack System: Submissions From The Back”. It is pretty self-explanatory what you can expect inside – control tactics and details for the back mount and a whole bunch of submissions. The instructional has four packed volumes that will shed new light on the back position in BJJ.

Maia has mostly been fighting in MMA, but in doing so, has made a name for himself as one of the very best grapplers in the octagon. Attacking from the back is his specialty, and this DVD does not only contain moves and transitions, but also concepts and principles that help make sense of the entire system.

Demian Maia is a Brazilian Jiu-Jitsu black belt under Fabio Gurgel. He was a part of the UFC from 2007 until 2021, having one of the longest careers in the organization. He has an MMA record of 28-11-0. !4 of his MMA victories came via submission.

Maia is also an ADCC champion (2007), CBJJ Brazilian Team National Champion (2003), and three-time CBJJO World Cup Champion (2002/2003/2005). In addition, he is one of the fastest promoted black belts in the history of the sport, going from white to black in 4 years and 7 months!

Maia used to represent Brasa Clue de JIu-Jitsu before moving on to MMA. Currently, it is anyone’s guess whether he’d be back to grappling competition after his UFC contract came to an end. He owns the Demina Maia Jiu-Jitsu Academy in Sao Paolo, Brazil, which has tens of affiliated gyms across the US and Europe. 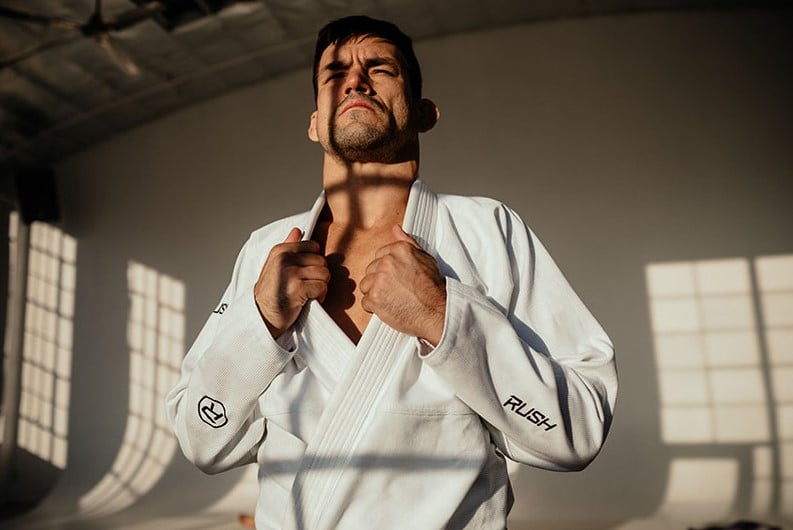 Back attacks. To be more precise, submissions from the back. This is turning out to be a timeless subject in BJJ, as it is one of the rare things that never fell out of focus. Conversely, people seem to be innovating and adding to it with every new BJ Jgeneration, both with and without the Gi.

Maia’s instructional is about back attacks without the Gi, which makes it applicable across the board. It covers optimal positioning from the back in order to be able to stay on effortlessly (ergo the name “Maia Backpack”). Furthermore, Maia focuses on dominating the grip fighting and opening up submission attacks from different angles. Throughout the attacks, Demian Maia points out how to still maintain flawless control of the position, remaining behind the opponent no matter what they try to do.

This Demian Maia BJJ DVD is quite advanced. It will be understandable to lower belts, but it is mostly going to benefit purple belts and above. Maia has immense knowledge of the subject and truly goes deep into the positional plays of the back mount. Even more so, he uses a wide variety of submissions that extended from the rear-naked choke to neck cranks and shoulder locks.

Demian also covers lots of scenarios in which he explores common reactions by the opponent. That equates to anticipating what an opponent will do and timing a move correctly, which is far beyond the comprehension of beginners. This includes both beginner grapplers and beginner MMA fighters.

There are four volumes in the “Maia Backpack System: Submission From The Back” instructional. The first and last volumes last just over 30 minutes each. Volume number two is the longest, with a total running time of one and a half hours. The third part in this Demina Maia DVD set is just under the hour mark. This brings the total material presented in this instructional to somewhere around three and a half hours.

The release is available in DVD format, and as a digital download, with high definition video and sound quality.

From the very beginning, Demina Maia goes deep into the philosophy of his unique back attacks system. After a short intro, he divides this first volume into two parts.

First up are the fundamental concepts of submission from the back that he calls upon in his system. Those start by defining which arm is for control, and which one is used to attack. Getting under the chin is also something Maia explains as a concept early on, rather than just a move. He also advocates attacking only after you’ve obtained solid control as well as attacking during transitions.

The second part of this opening volume looks at principles that make the submission attacks possible and effective. Some of the main principles he talks about are leverage, the priority of attacking, hand fighting, pressure application, and more.

Part two is more to less the meat and potatoes portion of this Demian Maia BJJ DVD. It starts with attacks against a belly-up opponent. It then goes on to explore different scenarios and situations depending on how an opponent moves.

For example, Maia gives an answer to the question of which side is better to fall to. He starts by exploring falling to the side of the attacking arm. Demian then follows that up with ways to block some of the most common reactions by opponents, in order to ensure control, and subsequent submission openings.

Demian also addressed some key issues with back control. Examples include the height of the seat belt control, the battles for hooks, and which one you should focus on.

Past the halfway point in this volume, the first submission makes an appearance. It is the form of the Mata Leao or rear-naked choke. It is quickly followed by variations of the choke, a sneaky shoulder lock, and even a neck crank finish.

In the final portion of the second part of this DVD, Demian Maia looks into options when falling to the seed of the controlling arm. Most of his tactics here lead to switching the control arm to an attacking arm, which opens up all the possibilities discussed above. Also featuring are the hand-to-hand choke, armbars from the back, and a few unorthodox ways of making someone tap from the back mount. 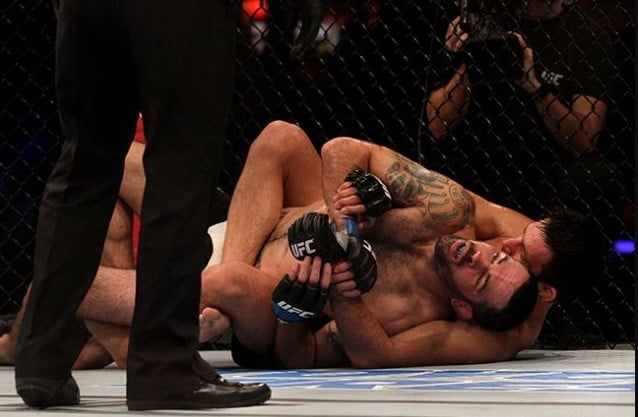 In the third volume, Maia tries to solve a problem position for back hunters – the turtle. I say try because I am not still completely convinced that everything he demonstrates will work against some of the new turtle defense systems out there. That said, he does have several very valid points in this section of the instructional.

Among those points is using timing to commence your attacks against a turtled opponent. I that sense, Maia advocates waiting for the opponent to move or making them move, in order to create openings that you can capitalize on. The attacks that become available range between direct chokes, crucifix attacks (including rolling crucifix entries). In fact, Maia pulls off all the stops here, showing some outright crazy moves like inverted Omoplatas, the forbidden “Crucifixo”, the “Quebra Nozes” choke, etc.

Bringing this Demian Maia BJJ DVD to a close is the final volume that further explores transitional attacks. In fact, if there’s one thing to take away from this entire instructional, especially for higher belts (purple, brown) it is to use transitions as opening for attacks, instead of looking for opening from static positions. In terms of back attacks that end in submission, this is pretty much the norm.

Maia also shares some key details on moves we’ve seen him do in the octagon to break through the opponent’s defenses. One example is the stretch principle, where he extends the opponent’s body to open up vulnerabilities.

What I particularly enjoyed is that Demian concedes that from time to time you’ll lose back control. however, that does not mean you should give up on submitting your opponent. Quite the contrary, he shows follow-up submissions to an opponent escaping, like ar triangle chokes and standing up to stay in control. he even shows a crazy heel hook from the back to wrap this crazy BJJ DVD up.

Considering the “Maia Backpack System: Submission Attacks” Demian Maia BJJ instructional DVD’s technical aspects and quality of content, we come to an overall score for this instructional that I’ll deliberate in short below.

Every technical aspect of this instructional is on point, as is expected from a BJJ fanatics release. Maia speaks English very clearly and it’s very easy to understand throughout the DVD.

This is where I have to dock some points from this Demian Maia BJJ instructional. One of the standards we hold all instructional against during these reviews is how easy the material is for people of all levels to comprehend and use. Maia’s work is great, but it does only apply in full to people that have been doing BJJ for years. In fact, it may end up confusing beginners more than it may help them understand that back mount.

Moreover, some of the approaches Maia shows, while undisputedly effective, have been proven to be easy to get around as the modern back attacks, and more importantly, back defense game develops.

If you are an experienced back attacker, this is the instructional that will answer many questions for you. If, however, you’re looking to start learning the fundamentals of controlling the back, and even attacking, I fear this particular release should not be your first choice.

It is a pleasure to see a Demian Maia BJJ DVD, as there haven’t been that many throughout the years. Maia is one of the absolute best and he definitely has lots to teach us all, particularly on the subject of attacking the back, which is his bread and butter. however, I will reiterate again that this is an instructional best suited for more advanced practitioners rather than white/blue belts.