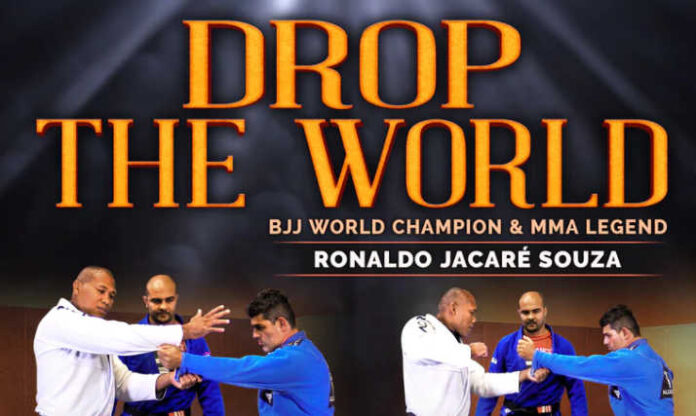 BJJ takedowns are one of the most complicated aspects of Jiu-Jitsu to master, mostly because there’s no real system that helps understand and categorize them. In the quest of figuring this particular puzzle out, we turn to what some of the best in the sport do, or in this case, have done. Ronaldo jacare Souza, BJJ world champion and UFC/Strikeforce veteran just recently shared his entire G-based takedown system in a brand new BJJ DVD. We got our hands on “Drop The WOrld” early and we got a chance to review it.

This instructional is all about taking someone down in the Gi, for the purposes of competitive Brazilian Jiu-Jitsu. While it may sound like tons of other BJJ DVD instructionals out there that might have disappointed you, the one thing that sets this particular DVD apart is who is behind it. Jacare Souza is one of the greatest grapplers to ever compete in both BJJ and MMA and is a very intelligent fighter.

Henceforth, his take on takedowns is not just a bunch of techniques borrowed from Judo and/or wrestling, but rather a very well-thought-out system that chains high percentage, easy to learn throws and takedowns together.

Ronaldo Jacare Souza is a 4th degree BJJ black belt under Henrique Machado. He also has a Judo black belt from Machado which is why Jacare is such a deadly grappler, standing and on the ground. It also makes him exactly the man to teach you how to “Drop The World”.

“Jacare” means alligator in Portuguese. Souza got his nickname while representing the ASLE jiu-jitsu and judo team, whose symbol is an alligator. Being their most prolific competitor, Jacare has racked up notable wins against some of the legendary names in the sport, including Roger Gracie, Fernando Terere, Robert Drysdale, and others.

In grappling, Jacare Souza is an ADCC champion, 3x IBJJF World Champion, 2x CBJJO World Champion, and a European Champion. He also won an ADCC superfight against Rober Drysdale. His 2004 conquest of the Absolute Division IBJJF World Title is one of the most impressive performances ever, given that he beat peak-version, Roger Gracie, in the final despite having his arm badly broken.

Jacare focused on MMA after 2005, eventually getting to the Strikeforce title after he beat Tim Kennedy. He moved to the UFC, terrorizing the middleweight division for years, but failed short of winning the title. His MMA record is 26-10-1. Souza retired from MMA in 2021, with hints that he might be coming back to grappling competitions.

Quite a lifetime in grappling and MMA for someone who initially did not like Jiu-Jitsu.

The subject in this BJJ DVD covers takedowns and throws for Brazilian Jiu-Jitsu with the Gi. Jacare Souza methodically covers his favorite moves, starting form the fundamentals of gripping and going through a mix of wrestling and Judo techniques that he manages to blend perfectly together.

Jacare also coves counters to takedowns, as well as some crazy guard pull counters and an odd submission here and there. In other words, if you are a Gi competitor, you’ll find something useful for your standing game in this Jiu-Jitsu instructional.

While Jacare covers fundamentals, they mostly refer to grips and movement on the feet. When it comes to the takedowns, especially the Judo throw, there’s some pretty high-level stuff in this one. He does lots of rolling moves, sacrifice throws, and Judo/wrestling combos that won’t be easy for newbies to make sense out of. Even some upper belts might struggle with some of the Judo stuff if they’ve never done Judo before, but Jacare does explain everything in detail, allowing for more experienced grapplers to greatly benefit from this DVD, given they take the required time to drill and practice the moves.

I’d say that this is a blue belt and above DVD at the very least.

High definition sound and video quality, and the usual option to acquire the instructional as a DVD or digital download. Jacare switches angles throughout the demonstrations, allowing viewers to see all the intricacies of his high-level throws from a 360-perspective.

“Drop the World” contains three parts, each lasting just above 30 minutes. That brings the total length of this instructional to an hour and a half, which is somewhat short given modern BJJ DVD standards.

The way Jacare presents the technique is organized and progressive, ending up in a complete system rather than just a bunch of unrelated moves. Souza has a heavy Brazilian accent but is not difficult to understand as he speaks quite slowly and clearly.

In the opening part of “Drop The World” Jacare Souza goes over the fundamentals of offensive gripping. He covers X-grips and ways to use them to set up attacks. He also talks quite a lot about the cross grip with the hand on the collar, shedding a lot of new light on a much-utilized position.

A couple of takedowns also feature in this portion of the DVD. The first is a rolling takedown that jacare sets up via a fake double leg. Building on the rolling motion of the first takedown, he then coves the Kata Guruma in detail, also finishing it with rolling. For those that are not up on their Judo terminology, the Kata Guruma is akin to the wrestling Fireman’s Carry.

In part two, there is a lot more Judo. One of my personal favorite throws, the Morote Seio Nage is first on the roster. Jacare Souza shares a couple of different setups, starting with the same side grip and finishing standing or on the knees.

After that, Souza looks into the basics of Judo counter-attacks, and how to reactively set up throws when someone is trying to take you down. He also explores basic wrestling takedown counters, thus broadening the spectrum of the standing game.

A very interesting chapter on secret details about the Ogoshi throw preceded the final chapter which circles back to the rolling Kata Guruma from an X-grip setup.

This is where Jacare Souza mixes everything up, he uses Judo to get wrestling takedown finishes and vice versa. For example, he has a very cool knee tap setup via the Ogoshi from the previous volume. He takes it even further by chaining together three different leg takedowns initiated with the same setup.

The final portion of the “Drop The World” instructional is all about sneaky and attractive-looking moves. Jacare shares his “secret” guard pulling counters that include a crazy cartwheel straight into a pass.

Souza wraps the DVD up by sharing a few very important drills that will help master this system of his, but not before he demonstrates a very slick flying triangle setup.

How We Grade The “Drop The World” Ronaldo Jacare Souza Instructional

Considering this Ronaldo Jacare Souza instructional DVD’s technical aspects and quality of content, we come to an overall score for this instructional that I’ll deliberate in short below.

Apart from the great job done form BJJ fanatics as the producers of this instructional, there’s only one big remark I have about this DVD – its length, or better said, lack thereof. While Jacare does share lots of interesting stuff, it seems like there’s space for more to help bring everything together.

Jacare’s prowess as a competitor and teacher is beyond reproach, but this particular instructional is not going to help white belts much. A regular Kata Guruma is difficult enough for experienced Judokas. Doing a rolling version and connecting it with wrestling takedowns is way too much for people not used to stand-up fighting.

That said, all upper belts, and particularly those with a background in Judo or wrestling will find priceless tips and tricks in this one. Furthermore, I love that everything works as a mini-system, with Jacare chaining things beautifully.

Given the length and the level of this Jacare Souza DVD, this is a fair grade.

There’s always something to learn from anyone. When it comes to a grappling and MMA World Champion, there’s always lots to learn. “Drop The World” provides an insight into the very successful stand-up game of Jacare Souza. The instructional will definitely improve anyone’s standing grappling game, but it won’t turn you into Jacare himself.