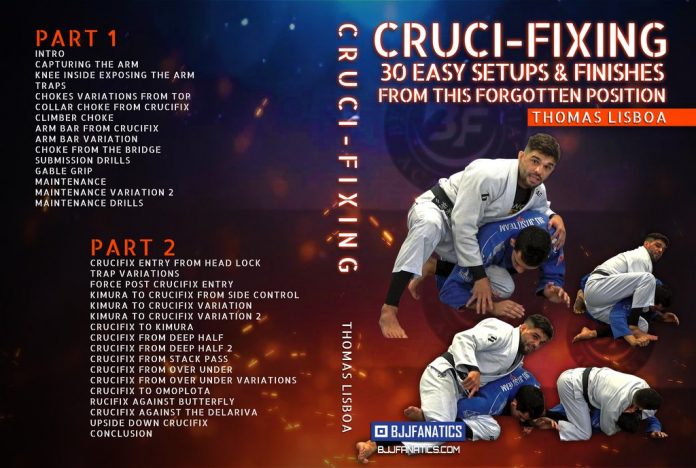 One of the hardest positions to escape from in Brazilian Jiu-Jitsu is back control. Unless you’re really proficient at positioning and defensive grip fighting, you’re highly likely to get finished from there. Now imagine that even this ability to grip fight is taken away from you. that is exactly what the Crucifix position does. It is by far the one and only worse BJJ position to get stuck in. Conversely, it is the one position you need to be looking to master in order to become a nuisance against people of all belt levels. The best resource for people that are interested in taking up the Crucifix as their main position is the Thomas Lisboa DVD Instructional “Cruci-Fixing”.

The crucifix is one of those positions that seem to get left behind. When Marcelo Garcia used it to destroy people during his prime, everyone tried to copy him. The moment he dropped off the radar, the crucifix went with him. It is a pity that nobody really paid much attention to a position that’s more effective than back control and mount put together. Or so we thought. It turns out Thomas Lisboa, a Fabio Gurgel black belt never really gave up on the position. After years of perfecting it, all his crazy details and submissions are now available for anyone. The “Cruci-fixing” Thomas Lisboa DVD is the crucifix instructional everyone wanted during the Marcelo Garcia days, but nobody managed to find.

“Jabuta” means a small type of turtle, commonly found in Brazil. Thomas’ godfather in regard to his nickname is his longtime training partner Bruno Malfacine. It was down to his laid back nature, and the fact that he was moving slowly after some time out, that Malfacine started calling him “Jabuta’. The name stuck though and is now a part of Thomas’ identity and his BJJ game.

31-year-old Thomas Lisboa was born in Taubaté, Brazil. he discovered Jiu-Jitsu at 16, after playing around with Judo for a couple of years. He started training at Alliance, which is the banner he’s fighting under to this day. After becoming a World Champion at purple and brown belt, he got his black belt in 2012. Since then, Thomas won a few further IBJJF championships, coming just short of the World title at the black belt on a couple of occasions. His career is still thriving though, and a World Championship is certain to come his way sooner rather than later.

The light featherweight is one of the best smaller-framed grapplers in the world. given his size, it is understandable how the Crucifix became his favorite position. The Crucifix choke is one of his main weapons, accounting for 30 % of his victories. “Cruci-fixing” is actually the very first Thomas Lisboa DVD instructional. Given how successful Thomas is as a grappler, and how great this DVD is, we sure hope for a lot more instructions in the future!

What makes this Thomas Lisboa DVD so different from others? Well, there’s the subject matter, to start with. Not many other BJJ instructionals really explore the crucifix to such a depth as this one. Moreover, this instructional offers a lot of positional details on top of plenty of submissions. Precise and in-depth information on entering and maintaining the crucifix is scarce at best. or at least it was, until this Thomas Lisboa DVD.

Furthermore, the instructional contains two volumes, each numbering well in excess of a dozen information-packed chapters. It is by far the most comprehensive crucifix system in existence. Thomas takes us through everything crucifix related, including submissions, and more importantly, transitions to and from other high-percentage positions. All in all, this instructional has everything you need to become the nastiest submission artist in your Academy.

PRoduction-wise, the instructional is flawless. Sound and video are on point, and Thomas has an extremely laid-back teaching style. He is easy to listen to, addresses important points and answers questions even before you get to ask them.

“Cruci-Fixing” Volume 1 – Fundamentals Of the Crucifix

The complete first volume is all about what the crucifix is. here, “Jabuta” goes over how to get the crucifix, stay in it, what grips you should use etc. It is a volume that’s full of essential “Cruci-fixing” information and one you must not skip when watching this Thomas Lisboa DVD.

First few chapters take care of the introduction to the position. here, Thomas goes over how to capture the arm with your legs, which is a common crucifix sticking point. Expect to learn a lot of tips on positioning your legs and further exposing the arm. A really cool chapter is the one explaining Lisboa’s “traps” philosophy, shedding light on his success with the crucifix.

When attacks start, Thomas begins with collar choke variations. Apart from your “garden-variety” collar choke from the top and the crucifix, you also get a brand new “climber choke”. Not far behind are some crucial arm-locking details involving some crazy armbar variations. The first volume ends with a bunch of submission drills to help you understand the crucifix and get comfortable. Moreover, Lisboa also demonstrates a few maintenance drills that really changed how I approach the crucifix. I have to admit that after watching this DVD I immediately reintroduced the crucifix to my game.

Volume two is where all the fun is. It begins with a slick crucifix entry from a headlock. “Jabuta” then follows up with some of his trademark trap variations. This paves the way for the craziness that follows – getting to the crucifix from every position!

Thomas’ first setup is a side control kimura to crucifix path. Given how close the Kimura is to the crucifix, Lisboa also explores so further transitioning options involving Kimuras. Of course, there’s always the opposite direction as well, offering a Kimura from the Crucifix. Further chapters take us into the crucifix from the deep half, over-under position. A cool Oomoplata finish from the crucifix is really going to make your day.

Wrapping up Lisboa teaches several ways to get the crucifix against common guards. The butterfly guard gets a lot of attention, but there’s also a crucifix vs. the De la Riva guard. The penultimate track is the upside-down crucifix, which will have you running to the mats to try it. Finally, a conclusion by “Jabuta” brings this amazing Thomas Lisboa DVD to an end.

As someone who has dabbled with the crucifix position, I was keen on giving this Thomas Lisboa DVD a try. I have to say I did not regret that decision. Furthermore, it prompted me to do a review of the whole thing, since it’s that good! “Cruci-fixing” is going to change the crucifix forever, and perhaps even usher a new era of back attacks. Who knows, maybe a bit more information on the upside-down crucifix will soon follow! We can only hope…