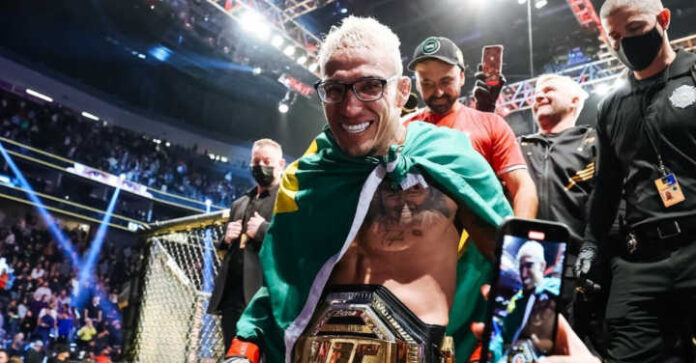 You’ll never see the UFC lightweight champion Charles Oliveira outside of the Octagon without glasses.

A kind of trademark of UFC lightweight champion Charles Oliveira is glasses. Because of them, he looks very tame and obvious outside the fight. Many would think that he is a professor or an engineer, not a man who earns his living by presenting his martial arts against people willing to inflict pain on him.

But what exactly is his vision and what happens when he takes off his glasses? It is to be assumed that he needs them since he wears them absolutely everywhere except, of course, in the octagon. Now he finally talked about it, after being asked if he could even recognize his opponent’s face when the fight starts.

“Not that I don’t see the face of the opponent, but I see three faces. If I hit the middle one, I’m good. And that’s fine with me, while there are three fighters, I’m just shooting the middle one. To be honest, I’m a man of great faith in God and it’s not a joke for me. If I take off my glasses, I only see about 50 percent, but that never created a problem for me in the fight, “Oliveira revealed in an interview with the Brazilian Flow podcast, making the audience laugh.

Obviously, Oliveira has not only a vicious “jiu-jitsu” but also a vicious diopter. He did not reveal how much, but it is clear from what he said that she is not insignificant.

The UFC champion sometimes knows how to reach the Octagon with glasses and even enter it and only then take them off. Asked if this meant that his eyesight was so bad that he could not even walk to the arena, he discovered that glasses were simply a part of him.

“Sometimes I go into the Octagon with glasses, sometimes I don’t. It all depends on my vibe. Sometimes I go in with glasses to look safer or even more nerdy than I actually am. When I take off my glasses everything is fine. I see an opponent on the other side “God has blessed me to see normally. But when I take them off on the street, I am a blind man,” he said.

Oliveira should have his second UFC title defense this spring, but he still doesn’t know who his opponent will be. It all leads to Justin Gaethje, who absolutely has the best references for the position of a challenger, but as long as the name of Conor McGregor sails there, nothing is certain.