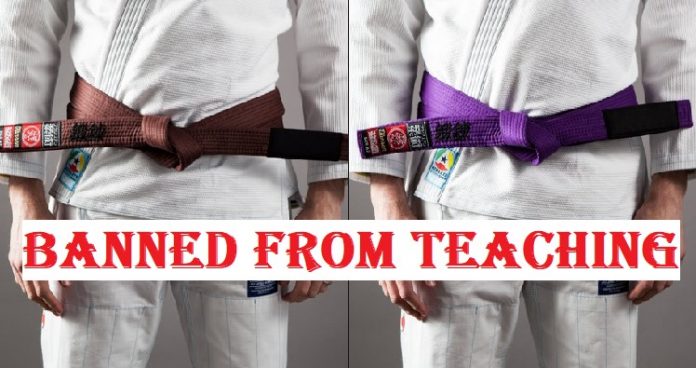 The Jiu-Jitsu Federation of Rio de Janeiro issued a statement where only Jiu Jitsu Black Belts are allowed to teach Jiu Jitsu.

“In Jiu Jitsu, only those who can teach are those who have the black belt. Whoever has conquered the band has the authority and knowledge to teach art. Do not forget: the presence of a black belt on the mat is mandatory!”

This is a very controversial decision from Jiu-JItsu Federation Of Rio De Janeiro because it doesn’t take into count regions and even countries where there is no black belts or there are only a few of them. You can’t actually expect someone to travel for miles to take a Jiu-Jitsu class. Also you cannot expect someone to train somewhere where he is not satisfied no matter which belt is coaching at that place.

What about kids? Children will certainly not train Jiu-Jitsu at a place that is more than a few hundred yards away from their home. And the situation is the same with adults, students without transportation etc.

Before Jiu-Jitsu had its rapid international growth there was competition by belts. There were only Beginner, intermediate and advanced divisions in tournaments. It was about your choice where you would compete, but White belt would usually apply to beginner, blue for intermediate and Purple, Brown and Black would apply to advanced level in competition.

We will only take one example of the top trainer who started teaching people as a blue belt thus qualified as one of the best in the world.. Professor Ze Radiola. He was a teacher of many great names in the BJJ world such as Braulio Estima, Otavio Souza and many others.

Fortunately, this decision will only apply to Gracie Jiu-Jitsu Schools because we are sure that there will be a great resistance to the large part of the BJJ community that will not agree with this decision. Just as no one has accepted Gracie Jiu-Jitsu Academy Online Blue Belts until they decided to abolish them.