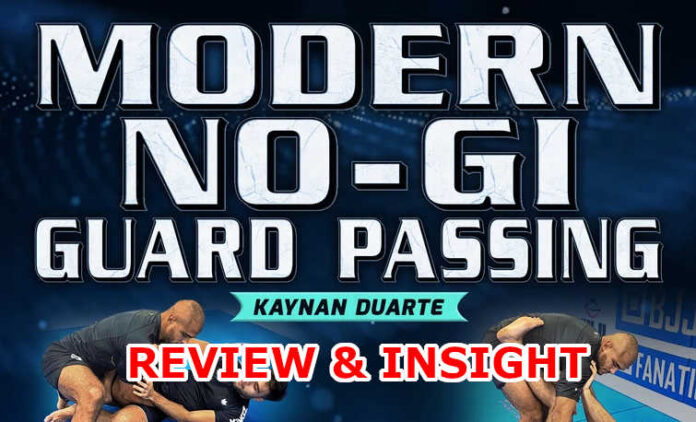 Can’t pass the guard? Here is a hint – if you truly want to learn how to be a dreaded guard passer, learn how to pass the guard without the Gi. And who better to teach you than one of the most explosive grapplers of today – Kaynan Duarte. Don’t be fooled though – the “Modern No-Gi Guard Passing” Kaynan Duarte DVD is extremely technical, albeit a bit inclined towards those of a more explosive athletic nature.

To be honest, I am not a big fan of Kaynan Duarte. However, that does not mean I wouldn’t earn from him, go to his seminars, or buy a Kayann Duarte DVD if the subject is something I like. This instructional covers a subject I have been researching lately, and I thought I’d give it a try.

The DVD contains a lot of information that falls under several major BJJ categories in regard to passing the guard. First of all, Duarte demonstrates how to use different passing techniques, like backsteps and body lock passing. Next, he covers how to beat some problematic guards, particularly in a No-Gi setting.

You’ll also see a few interesting innovative passing positions in this Kaynan Duarte DVD, as well as coverage of some really popular and “fancy” explosive passes. You can also expect a few submissions that help guard passing along, or help you end the match right then and there.

Kaynan Duarte is one of the new breed of BJJ black belt superstars, and he is downright scary. Grappling at heavyweight, Duarte has 14 titles to his name ranging from ADCC and the IBJJF Worlds to Kasai, Third Coast Grappling, and UAEJJF Abu Dhabi Pro. He is a menace for anyone that stands across him on the mats, Gi or No-Gi. However, without the Gi, he is more than a handful, as he has proven on many occasions.

He is an extremely well-rounded grappler and is dangerous from any given position in Brazilian Jiu-Jitsu. However, his bread and butter have to be his slick and powerful guard passing skillset. He goes by everyone’s guard in a seamless and effortless way, in the blink of an eye.

Duarte is a black belt under Andre Galvao and competes under the Atos Jiu-Jitsu banner. He has been training since 2010, starting off in Sao Paolo, and picking up in the US from 2016 as a purple belt. Duarte got his black belt in 2018, while on the podium of the IBJJF World Championship.

Duarte is not one that has cruised throughout the BJJ world without controversy. In 2020, he was stripped from the double title he won as a black belt in 2019 as a result of PED use. He was subsequently banned from competing in any IBJJF event for a year.

This Kaynan Duarte DVD is all about his bread and butter moves for passing any guard out there. Ther is a strong focus on modern guards, and modern counters people use to deal with passes in No-Gi. In four volumes, Duarte covers direct guard passes, counter guard passes, re-counters, and submissions passing.

This is a DVD that white belts will struggle with. There are many moves and positions (guillotines, Darces, knee shield, quarter mount, etc.) that most people do not really understand before blue belt. In fact, I’d say that this instructional will mostly benefit experienced blue belts and everyone above that rank.

The “Modern No-Gi Guard Passing” Kaynan Duarte DVD has four volumes, typical of the modern BJJ DVD instructional format. Yet another DVD by BJJ fanatics, which pretty much guarantees solid audio and video.

The volumes in this set have different running lengths, with the first and third lasting around 40 minutes, and the second and fourth nearly an hour long. Kaynan’s explanations are long enough to cover the most important aspects but short enough to allow for people to follow without getting lost.

Kaynan himself speaks quite distinctly, although he has a strong Brazilian accent. It is easy to follow his instructions.

This Kaynan Duarte DVD opens up with a short intro that is quickly followed by the first chapter that addresses the tedious job of dealing with the knee shield during passing. X passes follow suit, as some of the most basic and highly effective passes that you can employ, especially in No-Gi.

The second portion of this volume is all about the two most used passes in BJJ: the knee cut pass and the backstep pass. Most of Kaynan’s focus in this portion is how to get past the half guard.

A guillotine choke threat to pass (or submit) wraps this opening volume up.

In the second portion of the guard passing instructional, Duarte continues to use submissions threats to beat the half guard. The first few chapters in volume two are all about using the Darce similarly to the guillotine – to pass or submit.

A few more backstep options open up an introduction to the quarter mount position. Interestingly enough, I find that not many people use the quarter mount when passing, which is a shame. In this part of his DVD, Kaynan Duarte demonstrates exactly why we need to explore this position further.

Some of the most interesting chapters of the entire “Modern No-Gu Guard Passing” Kaynan Duarte DVD are in this portion. They involve passing from the squat position, which is very useful as it provides lots of control without any particular athletic requirements.

Past the halfway point in this instructional, Duarte presents his favorite ways of dealing with the dreaded butterfly guard. He takes several different routes through, around, and over it, using knee cuts, smash passing, and body locks. Typical Kaynan Duarte passing in the flesh.

In the final part of this instructional, the spotlight is on some attractive guard passing. The leg drag pass kicks things off, done against the knee shield and Reverse De la Riva guard. From there on, things get interesting, and by interesting, I mean acrobatically so. Duarte goes over jumping passes, folding passe, and other interesting and attractive techniques that will certainly get you past any opponent’s guard…if you can execute them.

Considering this Kaynan Duarte DVD instructional technical aspects and quality of content, we come to an overall score for this instructional that I’ll deliberate on in short below.

BJJ Fanatics do not disappoint when it comes to producing BJJ Instructionals. Both the DVD and digital download formats are 100% spot on from a technical standpoint. Sound is clear, the camera work is precise, and the video quality is great.

Content-wise, this instructional offers an interesting insight into the passing game fo one of the best in the world. With nearly 4 hours of material, there’s no lack of information in this one. Still, there are no long-winded boring tangents either, with Duarte staying on point throughout the instructional.

This Kyna Duarte DVD is not designed in a manner that will connect the first technique with the last one, but it is not hard to figure out how to put things together. In other words, it is a technical instructional focusing on sequences rather than a conceptual and philosophical one.

The complexity of the moves he is showing is not too advanced, but it is going to be confusing if you’re anything less than a blue belt. IN fact, apart from the fact that this DVD is not really suitable for all levels, I’d probably give it a 10 in terms of content.

MOdern No-GI Guard passing by Duarte is one instructional that I’d recommend every guard passer out there gets. The fact that it is No-Gi actually doubles its worth because you can use all the moves with the Gi as well. Totally worth your time and money.

A Kaynan Duarte DVD on guard passing was always going to draw attention. The least we could do si ensure that the instructional actually merits that attention. This one is perfectly structured, precise, and easy to follow. Moreover, it does exactly what the title promises – offers helpful ways in which you can pass guards. Get it!