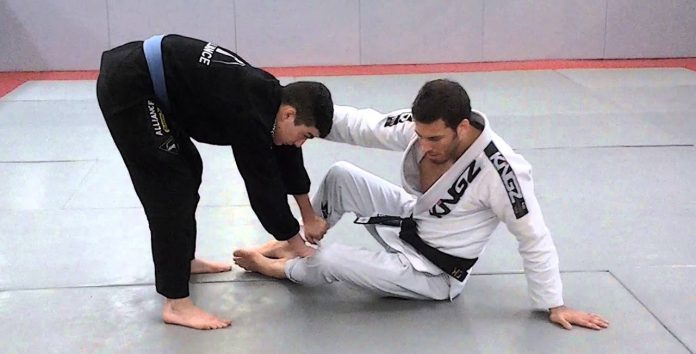 There are certain techniques in Brazilian Jiu-Jitsu that we all hate. Just as much as people that are on top get annoyed with the worm guard (and all lapel guards fro that matter) so do folks that play guard frown at the Toreando pass. It is a speed pass, that also ahs pressure components and has really superior mechanics. In other words, it is one of those nightmares passes that you’ll hate from the bottom of your heart. Especially if you train regularly with the Gi. That said, like everything else in BJJ, there are solutions for the BJJ Toreando pass, you just need to know where to look. Like this article, for example.

The one thing to understand about the BJJ Toreando pass is that there’s no move out there that will keep you safe 100% once the pass starts happening. If you enter in a battle against the Toreando heed on, you’ll end up passed, and stretched out each and every time. Instead, you need to either act early, and set up a trap or two or let it unfold, and execute a counter or a block very late in the process. In order to achieve both, you’ll need to know how the pass itself works.

Contents hide
Figuring The BJJ Toreando Pass Out
What Are Your Options?
Force Them Back
Choke ‘Em Out
Sweep Counter
Closing Thoughts

Figuring The BJJ Toreando Pass Out

The Toreando pass is a weird one. It is not really a loose pass, nor is it a tight pressure pass. it is some weird combination of both. It is very technical and will work for everyone. However, explosive grapplers, like wrestlers for example, really do end up having crazy amounts of success with it because executing it quickly and with power really does make a difference.

Even though the BJJ Toreando pass works in both GI and No-Gi, it is much more difficult to deal with when you’re wearing a Gi. This is exactly the version of the Toreando you need to figure out, in order to be able to prevent both Gi and No-Gi attacks.

In short, the BJJ Toreando pass gives the passer immense control over the longest levers of the human body – the legs. there are different spots to grip, but in all fo them, it involves the area of the pants between the knee and the ankle. Usually, people hold midway along the shins. The goal of the pass is to stretch out the near side leg while trying to force the far side leg to bend as much as possible. This, in turn, will rotate the person on the bottom so that the area between their knee an armpit is completely exposed. That is the explosive portion of the pass.

What follows is the pressure part of the Toreando pass. That is when you place your shoulder on the opponent’s belly and stay there, keeping them stuck and bearing all your weight on top. Plenty of other details, like having a stiff arm on the near side, switching the hips, etc. make the pass even more terrible. Plus, there are several different variations of it, in terms of grips, leg placement, motion, etc.

What Are Your Options?

As I mentioned previously, once you know the strengths of the BJJ Toreando pass, you can easily exploit the few weak spots in the chain of motion. Those weak spots appear either very early in the pass, or extremely late. Along the middle, you can just sit back and absorb the pressure, because everything you do will lonely put you in more peril.

The first “hole’ that the Toreando pass has is that it ties the top person’s arms up with the pants grips .that means you can place grips of your own, that will help you deal with the pass, either before it gets going, or right before they complete it. Another thing that goes in your favor is the power of your legs. While the opponent can control them, if you can make them heavy and put them in a certain configuration, it will make their task really hard, blocking them for long enough to mount a counter.

With all that in mind, there are three things you can do from guard when defending the Toreando pass: force them back, choke them, or sweep them. Here’s how:

This is probably the highest percentage BJJ Toreando pass defense there is. It is an early defense and is based on grip placement. Moreover, there are Gi and No-Gi version of it, meaning it is universally effective. The whole idea is to block the leading edge of the pass. In the case of the Toreando, that is the near side arm, whose shoulder looks to fall on your chest/belly. The ways of blocking are twofold. One that works great for Gi and No-Gi is to keep your near side arm on the opponent’s biceps (also on the near side arm) using a C-grip. Once you have the leading edge blocked, you can sneak the far side foot in and place it on their shoulder to recover guard.

There’s also a late version of this block, one that involves a Gi -only grip. When you’re too late at stopping the shoulder, all you need to do is grip the sleeve on the near side arm and stiff arm it. You could set it up really early as well, but the biceps options is easier to do. A simple sit up and a hip escape swill force the opponent back, and make them wonder if they should try the pass again.

My personal favorite. Once an opponent sets up a  BJJ Toreando pass (i.e. you see or feel both grips on the pants), go for a cross collar grip. Most often, if you’re in a seated guard this will be easy, as opponents have to lean over to get the pants grips. You’ll block the op[opponent from going to both sides with just this grip. In order to wrap the choke up you can let them pass, and just focus on opening your elbow enough so they enter the loop themselves. Alternatively, you can attack from a seated guard by changing the angle towards the free side in order to sneak the second arm in.

Sweeping is one more example of an early counter. This one is a bit more advanced since you have to know how to relax. The moment opponents grab your Gi pants, you need to do two things. First, relax our legs completely, making them heavy to manipulate. Next, lift your butt off the ground, using a collar grip (like the one in the loop choke) to pull, and a post on the mats to push. What you want to do from there is a collar drag sweep. Simply use the pendulum-like position you’re into sewing to the outside of the leg and use the hip switch motion to pull the opponent to the ground. As long as they keep a hold of the Gi pants, they’ll come crashing down to the mat. If they let go, you’re out of ht pass anyway. Mission accomplished.

Understanding the offensive part of any BJJ move is the foundation of making defenses and counters work. With the BJJ Toreando pass, all the danger comes from the manipulation of the legs. However, you get grips for free, and as long as you plant them smartly (biceps, near side sleeve, or cross collar) you’ll be able to prevent the pass early, or even get out of it very, very late. have fun with the three options above and feel free to add-in your own.