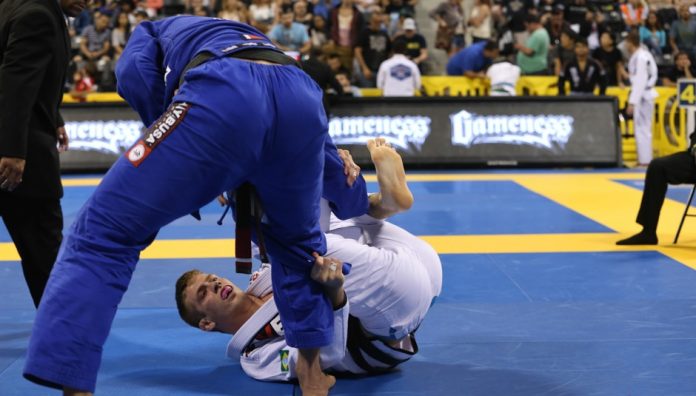 Lapel guards do present a major problem in modern BJJ. The Gi is a powerful weapon to use against any opponent. There is a multitude of chokes and different positions available through Gi manipulation. A unique trait of BJJ is using the opponent’s Gi against them by trapping them with various lapel guards. The lasso guard reigned supreme amongst open guards at the highest level of competition. However, as of late, another guard has taken over the mantle of most annoying guard to pass. Queue the notorious and very annoying, worm guard.

If you’re interested in Buying Keenan Cornelius’ Lapel Guard Encyclopedia you can check it HERE.

Ask any BJJ practitioner and they’ll tell you how much they despise the worm guard. It is a variation of the seated half guard, made more secure with the use of the lapel. The worm guard first surfaced in 2014, courtesy of BJJ European and World Champion Keenan Cornelius. Keenan has utilized the worm guard in many of his high-level black belt matches successfully. So much so, in fact, that other notable BJJ World Champions like Joao Miyao and Rafael Mendes soon followed suit. Of course, the entire Jiu-Jitsu community is never far behind when something as attractive and efficient as this guard comes along

Contents hide
Why Is The Worm Guard So Effective?
How Did World Champions Deal With the Worm Guard?
Passing The Worm Guard
Keenan’s Response And The Evolution Of The Lapel Guards Encyclopedia
In Summary

Why Is The Worm Guard So Effective?

So, what is it that makes the worm guard so effective (read annoying)? In essence, the worm guard is a way of restricting your opponent’s movement by re-enforcing your open guard with their own lapel. This open guard position was developed by Atos Team’s Keenan Cornelius. Well, former Atos team member, anyway.

From a mechanical standpoint, the worm guard is essentially a seated/De La Riva guard variation. The one main distinction is that the focus of control switches from the outside leg hook to the lapel. Why? Well, the lapel, along with the inside leg provides 360-degree control, leaving no openings. If you start in a seated or De La Riva guard, you always want the inside leg on the opponent’s hips. This is your main starting point. You also want the lapel out of the belt on the same side of the inside leg. The goal is to wrap the lapel around the inside leg and grip it with the opposite side arm. Doing this places your opponent’s leg in a circle made by your gripping arm, your inside leg and their lapel. The level of control is insane.

Simply lying to your side with everything in place as described is going to make your opponent lean forward. That’s an effortless posture break if ever there was one. What can the opponent do? The leverage created by this control severely restricts the movement of the passer, as well as their ability to put pressure on the bottom grappler. This way, a variety of sweeps, reversals, and back takes open up for the bottom player. Let’s say they try to knee slice. The inside leg prevents it. Backstep? There’s no way out of the loop created by the lapel grip. Pressure passing? They’ll go flying!

How Did World Champions Deal With the Worm Guard?

So, after the first version of the worm guard emerged, and Keenan got the best of most, what was the response? As expected, it didn’t take long for the top-level grapplers to start devising solutions. It is not that the guard is any less effective, it is just more of a fair fight now that we know a thing or two about it. Or so we thought, anyway. Just like with everything in BJJ, the worm guard also evolved and got better. Or more annoying. Whichever way you prefer it.

Initially, I think it was 13 x BJJ World Champion Marcus “Buchecha” Almeida who figured out a great way to shut down Keenan’s guard. Buchecha’s concept worked by removing the main tool of the worm guard – the lapel. When they fought, Buchecha focused on breaking the lapel grips. Eventually, he did pass Keenan’s guard and won the match. Breaking the lapel grips will break the opponent’s complete worm guard game. However, achieving this is not as easy as it sounds.

The worm guard players soon started merging the worm guard with other guards. The De La Worm and Spider Worm guard, for example, were some of the earliest hybrids. They took care of the grip problem, but now, a different issue presented itself. Bruno Malfacine used his base and stability to effectively prevent Miyao from sweeping him with the worm guard. Not even the De la Riva hook could make any difference. Malfacine remained in a squatting position, making it difficult for Miyao to create any space for a sweep. Bruno closed most of the gaps in the guard, making it impossible for Miyao to get a sweep because he couldn’t really feed the lapel grip.

Ultimately, people actually went a step further and found out how to pass the worm guard, rather than just counter its attacks. And it has everything to do with posture. Having good posture, regardless of which guard you are passing, is essential in BJJ. The minute your posture is broken, it will be easier for your opponent to attack. This is especially true in the case of lapel guards.

Arguably the world’s greatest guard passer, Rodolfo Vieira showed zero respect for Braulio Estima’s lapel game. It was not a worm guard variation but the concepts still apply. Throughout the match, Vieira keeps his posture rock solid, making it difficult for Estima to maintain the lapel grip and attack.

Leandro Lo also had his say on the matter. Lo has one of the best passing games in the sport. When he came up against Keenan Cornelius and his worm guard for the second time, he had a few answers ready. Lo used the cross-face to pressure Keenan into releasing the guard. To achieve it, Leandro steps over the De la Riva leg, forcing a switch from the worm guard. This effectively gets him into the half guard, and he passes with ease.

Which brings us to the latest evolution. Did Keenan choose to work on the worm guard in particular? Yes, he did, but he didn’t leave it at that. He created four more “cousin” lapel guards that now tie together into the most comprehensive lapel guard system ever put together!

Keenan’s Response And The Evolution Of The Lapel Guards Encyclopedia

What is the next step after the worm guard, you might wonder? Well, it is the ringworm guard, of course. Yeah, it is not one of the best-named guards, but it is equally as pesky as ringworm. So, in that sense, the naming is spot on. However, that is far from the final spot in Keenan’s lapel wizardry.

Three more lapel guard variations now provide options most of us have never dreamed of having when it comes to playing guard. The Reverse De La Worm (a Reverse De La Riva guard hybrid), the Squid Guard and the Gubber guard are the latest and greatest of Keenan’s inventions. Unlike the initial worm guard, all of these guards actually work together, feeding off each other. This means that now, whatever someone does form the worm guard, there’s a solution. And the solutions come in the form of far worse lapel guards that now actually feature even direct submission options.

If you’re really interested in learning them all, an entire series of articles won’t even scratch the surface. Your best resource is actually picking up the 10-part “Lapel Encyclopedia” instructional, available in both DVD and digital format. Keenan’s Lapel Encyclopedia features everything, from opening lapel guard concepts to worm guard strategies and recovery. Of course, each of the five guards gets a volume of itself, along with an entire volume filled with submission options. In fact, check out the most detailed review of Keenan’s Lapel Encyclopedia featuring the worm guard right HERE!

The Worm guard evolution is just as captivating as that of any move in modern Jiu-Jitsu. Do you need to know it? Absolutely, particularly if you do Gi Jiu-Jitsu even on occasion. However, if you’re really interested in using it as your main tool in competition, particularly at a high-level, you need the entire Lapel Encyclopedia system. It is more than worth investing in.

If you’re interested in Buying Keenan Cornelius’ Lapel Guard Encyclopedia you can check it HERE.